Triumph and Tragedy: The Loss of the Lusitania 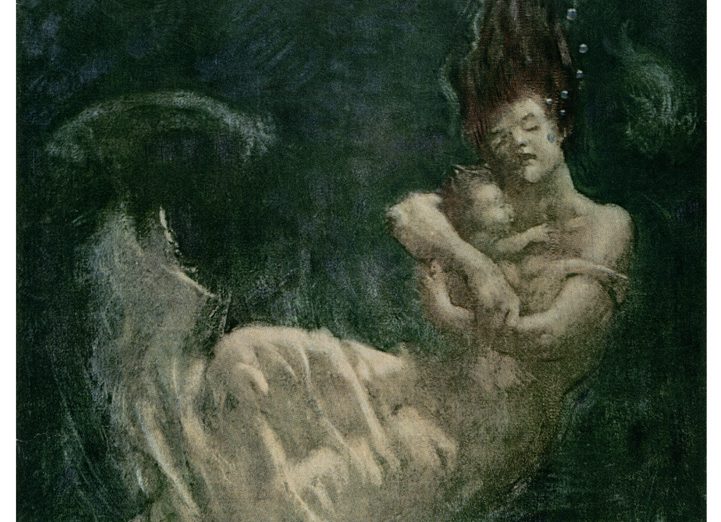 The 1890s was a remarkable time for transatlantic travel. For the better part of a century, the British had ruled the waves both militarily and commercially. All this, however, changed in the blink of an eye. In September of 1897, the German vessel Kaiser Wilhelm der Grosse debuted, and due to her massive size and impressive speed, won the German Empire a great deal of prestige. From then on, the German companies would continue to produce liner after liner, each slightly larger and faster than the last. The brand new German liners damaged British pride. The people of Great Britain were forced to accept that they were no longer alone in the competition for naval dominance. However, the humiliation would not end there. Across the Atlantic, the American financier J.P. Morgan had purchased an impressive group of shipping companies, and in 1902, he bought out the British company White Star Line. There was now only one major British company left, Cunard Line, and it was in no condition to compete with the German and American competition. Cunard’s fleet was old and slow, and they were not making enough money to finance the construction of new ships. The British Navy had to step in.1

So, in 1902, the British Navy and Cunard Line sat down with each other to work out the terms of a deal that would save Cunard Line from the competition from J.P. Morgan and rehabilitate the British merchant fleet, restoring it to its preeminent role. The navy agreed to finance the construction of two brand new ships at an overall cost of 2.6 million pounds. The agreement also stated that the new ships would be made available to the British government during a time of war. In exchange for all this, Cunard guaranteed that ownership of the line would never pass from British hands. Both parties walked away the victor. For Cunard, they now had the backing of the navy at every stage of the construction process, and the navy had ensured that Great Britain would retain ownership of her last great shipping line. Neither side knew it then, but they had just signed a deal that would have a bigger impact than anyone could imagine.2

Five years of design and construction passed, and in September of 1907, the Lusitania was ready to begin service. At the time of her maiden voyage, the Lusitania was the world’s largest, longest, and most luxurious vessel. She measured a mind boggling 785 feet in length and weighed 33,395 tons.3 She was spectacular! The Lusitania boasted among other things a domed, double-tiered dining saloon decorated in white, and gilt in an eighteenth-century style, with spacious cabins and suites, and elaborate public rooms. In addition to this, she was fast. On her second voyage, she traveled at an unprecedented speed of 24 knots, making her the fastest ship in the world, and she would prove to be even faster. There is no doubt that Cunard was proud. They now had in their possession the world’s greatest ship, with one more to follow. They had rendered every other ship in the world, whether it be German or American, obsolete. For the navy, the triumph was also important. The Lusitania was the embodiment of British technological knowledge and skill, but the British Navy had also gained a valuable asset in case there was a war against Germany. The Lusitania was an epic triumph. No one at the time could have imagined that her name would become synonymous with death and tragedy.4

It was in this successful role that the Lusitania continued to serve for the next seven years. But her fortune changed dramatically in the summer of 1914. On August 4, 1914, after Germany violated the neutrality of the state of Belgium, the British government declared war on Germany. The Royal Navy immediately jumped into action. For the dozens of ocean liners in the British merchant fleet, their past lives were over, for they were now entering into an extremely dangerous situation. Many ocean liners, including the Lusitania’s sister, were requisitioned for service as troopships or hospital ships. However, the Lusitania was spared these dangerous jobs. The Royal Navy had a different purpose for her in mind.5

The Lusitania was not called to be a troop transport or hospital ship, but rather the navy allowed her to continue her passenger service. But they did have a purpose for her. In a clause in her construction contract, it was agreed that the Lusitania’s cargo space would be available to the Royal Navy at any time should they need it.6 Meanwhile, in the United States, companies started producing war products with the intention of selling them to both sides. The Royal Navy was going to use the Lusitania to smuggle ammunition and other war materials to assist them in their war effort. This smuggling operation was undertaken without alerting the passengers of the Lusitania. There are two reasons why the Royal Navy thought that using the Lusitania as a smuggler would not put her in harm’s way. For one it was thought that she was too fast to ever be successfully attacked by the slow and tiny U-boats. It was also thought that the Germans would never sink the great Lusitania while she was carrying innocent people. They were wrong.7

It was on May 1st, 1915, after almost a full year of successful wartime service, that the Lusitania embarked on her final journey. That morning, an ominous warning from the German government was published in over half a dozen New York newspapers, stating that anyone sailing on the transatlantic route should keep in mind that a state of war existed between Great Britain and Germany, and that they should proceed only at their own risk. This warning was met with mixed reactions from the passengers. Many were quite disconcerted, like Olive Hanson, who recalled that some photographers on the pier were saying it would be the “Last Voyage of the Lusitania.”8 Others such as millionaire Alfred Vanderbilt, who had received a telegram warning him not to make the journey, merely shrugged it off, saying it was, “somebody trying to have a little fun at my expense.”9 Nevertheless, at 12:30 p.m, the Lusitania departed from New York for the last time, laden with 1,959 passengers.10

The first five days of the voyage were quite enjoyable. The weather was pleasant and the social life was engaging. On the surface, it appeared like any other passage. However, the German u-boat, U-20, was lurking off the coast of Ireland, and the Lusitania was headed straight for it.11

The morning of May 7, 1915 was shrouded with fog. The Lusitania was not far from home. The voyage was almost over. At noon, the weather cleared entirely, revealing the emerald green coast of Ireland. However, at 2:10 p.m a torpedo, launched by the U-20, was spotted headed for the ship. It was too late for evasive maneuvers, and the torpedo struck the Lusitania. The great ship shuddered at the impact, but just seconds later another more forceful explosion shook the whole ship, blowing debris out of the water.12 Everyone knew from that moment on that the Lusitania was doomed. The ship’s head was sinking lower by the minute, and the ship had stopped responding to orders from the wheel. Despite this, the Lusitania was still moving under her own power, making lowering the lifeboats extremely dangerous. The ship had also developed a severe list on her port side, rendering half the lifeboats unusable. Nevertheless, many passengers and crew attempted to lower the lifeboats. Almost all of them were unsuccessful. Those that could be launched were often destroyed by the ship’s protruding rivets. Some attempts were made to slide the lifeboats down the sloping deck of the sinking ship, but these too ended in death and disaster. Still more lifeboats capsized sending their human cargo plunging into the sea. More passengers were trapped below decks, and were horrified when the power went out leaving them trapped in darkness. It was an utter nightmare. The ship continued to sink at an alarming rate, and in just eighteen minutes she was gone. One of the greatest ships ever built, the pride of her country, was gone forever. However, for those struggling in the water, the horror was not yet over. Only six lifeboats had been successfully launched from the ship, leaving countless people stranded in the cold water, where they clung to wreckage or overturned lifeboats. Most died of hypothermia. A brief glimmer of hope was felt when the British warship Juno approached the wreckage site, but she was called back by the navy because it was deemed too dangerous for her to help, leaving both the living and the dead stranded. In all, 1,201 men, women, and children perished in the sinking. Only 758 people survived.13

The living and the dead were rescued by a fleet of civilian boats from the Irish town of Queenstown. The reaction from the world was one of shock and awe. Many people asked how the Germans could commit such a heartless act. For the British Navy, the loss of the Lusitania was an embarrassing blow, and they were going to be held accountable for the loss of the liner that they had used so wrongly. The disaster brought a wave of anti-German sentiment in Britain; small riots broke out that terrorized German-owned businesses. Despite the terror of the tragedy, the British were able to transform the sinking into a highly successful propaganda campaign that embittered the people of Great Britain even more against their German opponents. In fact, the ranks of the British army swelled, with an additional 150,000 recruits, in the wake of the sinking. In the United States, the reaction was swift. While it did not provoke the U.S. to join the war, the intentional murder of innocent civilians swung public opinion wholeheartedly in favor of the British. More people now than ever wanted to continue providing war materials for them. The actions taken by the Germans were disastrous for them. Almost the whole world turned against them, and they were now viewed by most as cold murders.14

The Lusitania was one of the greatest ships ever built. Her sheer size, speed, and luxury won her fame from all over the world. She was truly loved. It is ironic how at the beginning of her life she represented all that was noble about human endeavor: technological advancement, national pride, and remarkable skill; but in her death, she came to symbolize all that was terrible about human endeavor: death, disregard for human life, and war. The Lusitania and the lives of those who died will never be forgotten.

Christopher Hohman is a senior History Major and Public History Graduate student at St. Mary’s University. He enjoys writing and researching a variety of topics and is currently working as a graduate research assistant while simultaneously working on his capstone project about women in the San Antonio Fire Service
Author Portfolio Page