Walt Disney and the building of his Magic Kingdom 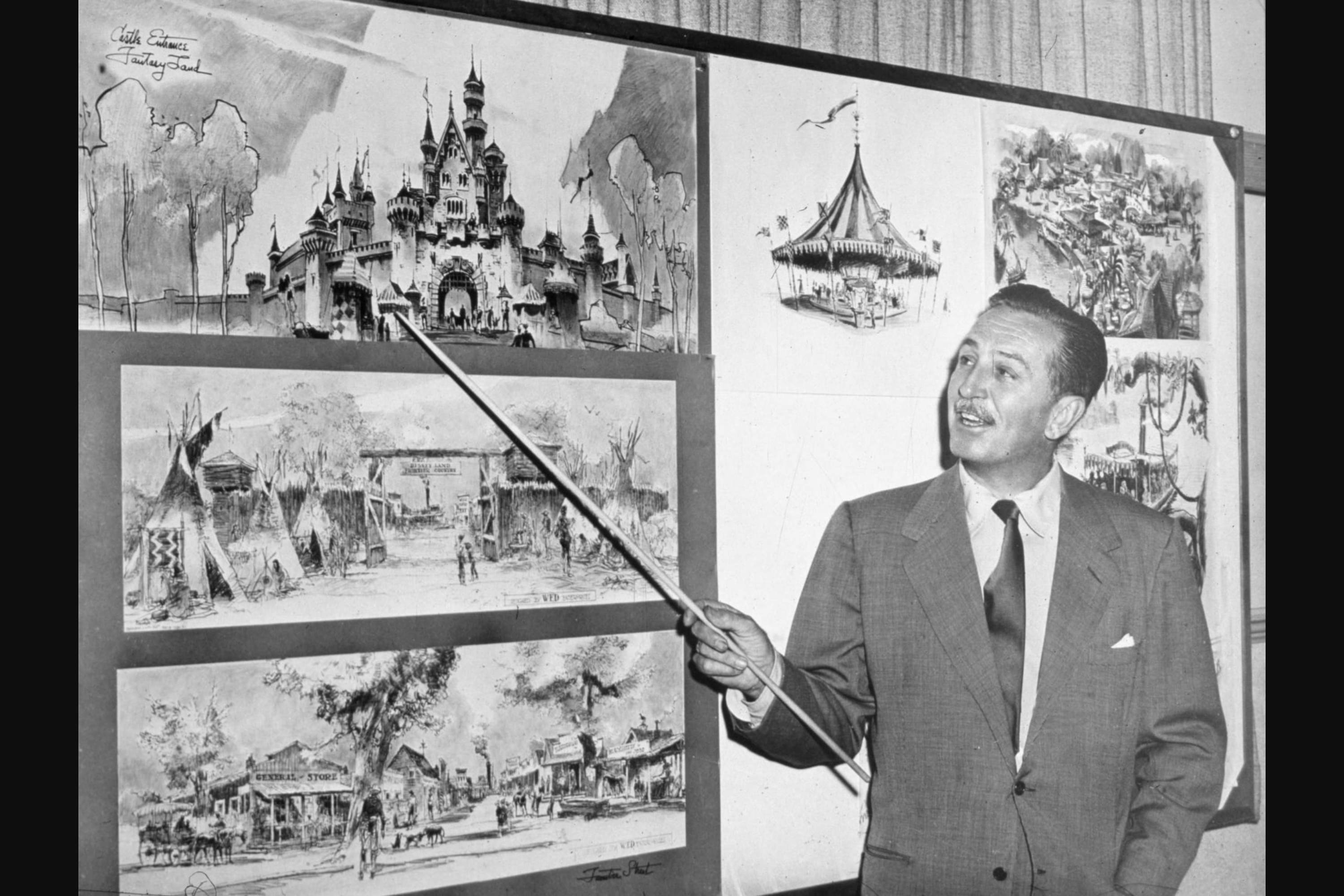 Walt Disney is a cartoon genius and was capable of elevating cartoon shorts into full-blown movies. He had a vision, which was to create an amusement park based around family. He wanted to build a place where everyone could have fun. He had studied amusement parks for years, and regularly sent employees to amusement parks to list the good parts of the park and the bad parts. He wanted to change the whole industry of amusement parks from being dirty, unsafe, and just lacking customer focus, to something better and fun for everyone. Roy Disney, Walt’s older brother and partner in business, didn’t see success in the park, and thought it was too expensive, and felt that it would be hard to sell as an idea to bankers. Also, they were doing just fine in the business ventures they already had, with their movies and cartoons, so why take the risk and go into a new unknown direction? But Disney kept going, unable to convince his brother of the success of the project. He didn’t get much money from the company at first, and had to invest his own insurance policy to fund the project himself. He was going in, all or nothing, into the amusement park that seemed doomed for failure, but he took on the challenges head on to achieve his new dream.1

Disney had a vision of a constantly changing park that would get better year after year, and he wanted to bring his dreams and creations into the real world. Some people have said that Disneyland was just Disney’s dreams made real, and that the magic kingdom was an acclamation of everything that Disney had become fully realized. In 1954, Disney thought he would need $11 million originally to fund the project, but was horribly wrong and put into a critical financial situation. The project ending up being $17 million, so he thought of an idea and ran with it. He started to lease places within the future park to big corporations like Pepsi and Kodak to help fund the project. The leases were for five years, and the first and last year had to be paid in advance. Disney’s idea worked phenomenally well, and he was able to raise most of the money he needed for the park with the rest of the money that was needed. Disney approached ABC to see if they would like to do a weekly show showing off things about Disneyland. Of course, the show was also called Disneyland when they signed the deal. In exchange for the rights to the show, ABC paid $500,000 and guaranteed $4.5 million more.2

The park’s opening day was on July 17, 1955. It had national coverage, but all kinds of minor mishaps took place. At first, it was projected that the park would get 10,000 customers on its first day, but double of that number appeared, causing many problems for the park. For example, people were getting in for free because Disneyland didn’t have enough tickets to sell. The park needed water fountains, but they were in short supply at the time because there was a plumber’s strike going on. Also the water in the rivers and lagoon dried up quickly, so the park engineers had to redo the bottoms with some clay. The riverboat Mark Twain nearly capsized because of the overcrowding, and the other rides didn’t have enough seats for the overwhelming number of guests that had appeared for the parks opening. Disney’s dream park was off to a rough start, and this wasn’t just another business venture to Disney. It was the chance to build the “happiest place on earth.”3 High temperatures further put the park in a bad position, and local critics in the press harshly attacked Disneyland. They called it a “nightmare” and a “giant cash register clinking and clanking.”4

The verdict on the park’s success laid in the people’s hands. But even though it wasn’t put into the best spot because of its opening day, Disney was able to make it into a success. Luck and promotions had a big part to play in the park’s success. The show Disney did about Disneyland showed all the attractions, and things to do in the park, like meet Mickey Mouse. Later the same year, the show released to the world, and we were introduced to a character named Davy Crockett. He soon became a huge trend in the country and was beloved by many that went to Disneyland. Disney had this to say to a friend about the park: “Billy, look around you at all the people. All the nationalities. All the colors. All the languages. All of them smiling. All of them having fun together. Billy, this is the real world.”5  Disney loved the way the park turned out, especially the monorail that went around the park, which was included in his design for the park since the very beginning.6

Disney never stopped trying to improve the park to make it into the vision of what he thought amusement parks should be all about. Disneyland had everything a regular amusement park would have, and then some, like a huge replica of the Swiss Family Robinson Tree House. Despite Disneyland having a rocky beginning, it has become one of the most well-known and beloved amusement parks of all time, and is treasured by people of all ages. There’s always something new to do or look at, and its just a fun revitalizing atmosphere to be in.7

I don’t think Walt Disney imagined his company would become such a huge staple in the industry and it’s basically all over the place now and owns so many other different companies. It’s amazing to see the transformation of himself as an artist into creating a theme park. Although he started off on the wrong foot he continued to push forward and eventually it has and still is a dream destination for anyone. Very informative and well written!

I love how Walt Disney started with an idea, and despite people telling him it was too expensive or wasn’t worth the investment, he still continued pursuing his idea and funded the project on his own. Little did he know how big his idea would grow. Other than the information presented this was a really cool article to read on how Disney got started.

I like how Walt Disney would send his employees to go investigate other amusement parks to make his better for everyone. This article really shows how great of a business man he was and how creative his ideas were too. I have been to both amusement parks in the United States and there really is something for everyone. It’s amazing how it has expanded so much with such creativity.

Its incredible to read about the upcomings of Walt Disney and the brand that is loved all over the world through its films and resorts. This shows how a simple idea can really take you far and become something bigger than you ever imagined. This artifcle did a good job in explaining everything and I found it interesting how Disney had a troubled start and now its become the ideal vacation for any kid on Earth.

I think it is safe to say that everyone has many fond childhood memories of Disney, and this article did a good job of telling the story of how our childhood memories came to be. Walt Disney was always a very interesting person to me, and sometimes it’s hard to separate the man from his creation. I am very intrigued by Disney and how he came to be, and this article gave me a good place to start in learning more about him.

I believe the story of Disney is very inspiring because of the rocky start it had. It is so famous and successful and to see that even Disney had a rough launch gives me hope. It is also very fascinating to see how Walt took his art and transformed it into something that truly came to life. He was obviously a very creative and business minded man.

Walt Disney’s story has always been very inspiring to me. He grew up with so much adversity and still managed to achieve his dreams in a revolutionary fashion. He saw his dream and he went after it, regardless of all the people telling him his ideas wouldn’t work out. Imagine if his brother would have convinced him to not work in the amusement park! Nobody would know about the beloved Disneyland that brought happiness to so many people around the world! You have to accept a man’s vision for greatness.

I often think of what life would be like without major networks or companies like Disney. This article just reminded me how globally recognized Walt Disney’s work is and how it affects the majority of the world. The beginning of this companies empire did start with bumps on the road, as any other company, but it does not take away from how victorious its been decades after its inauguration. I did not know anything about the struggles at the beginning until reading this article, awesome job at describing and explaining everything.

Walt Disneny’s story has always been very inspiring to me.he still continued pursuing his idea and funded the project on his own. Little did he know how big his idea would grow. Other than the information presented this was a really cool article to read on how Disney got started.

I often think of what life would be like without major networks or companies like Disney. This article just reminded me how globally recognized Walt Disney’s work is and how it affects the majority of the world. The beginning of this companies empire did start with bumps on the road, as any other company, but it does not take away from how victorious its been decades after its inauguration. I did not know anything about the struggles at the beginning until reading this article, awesome job at describing and explaining everything.