West Side Illumination: The Teatro Alameda and the Exhibition of Mexican Cinema in San Antonio 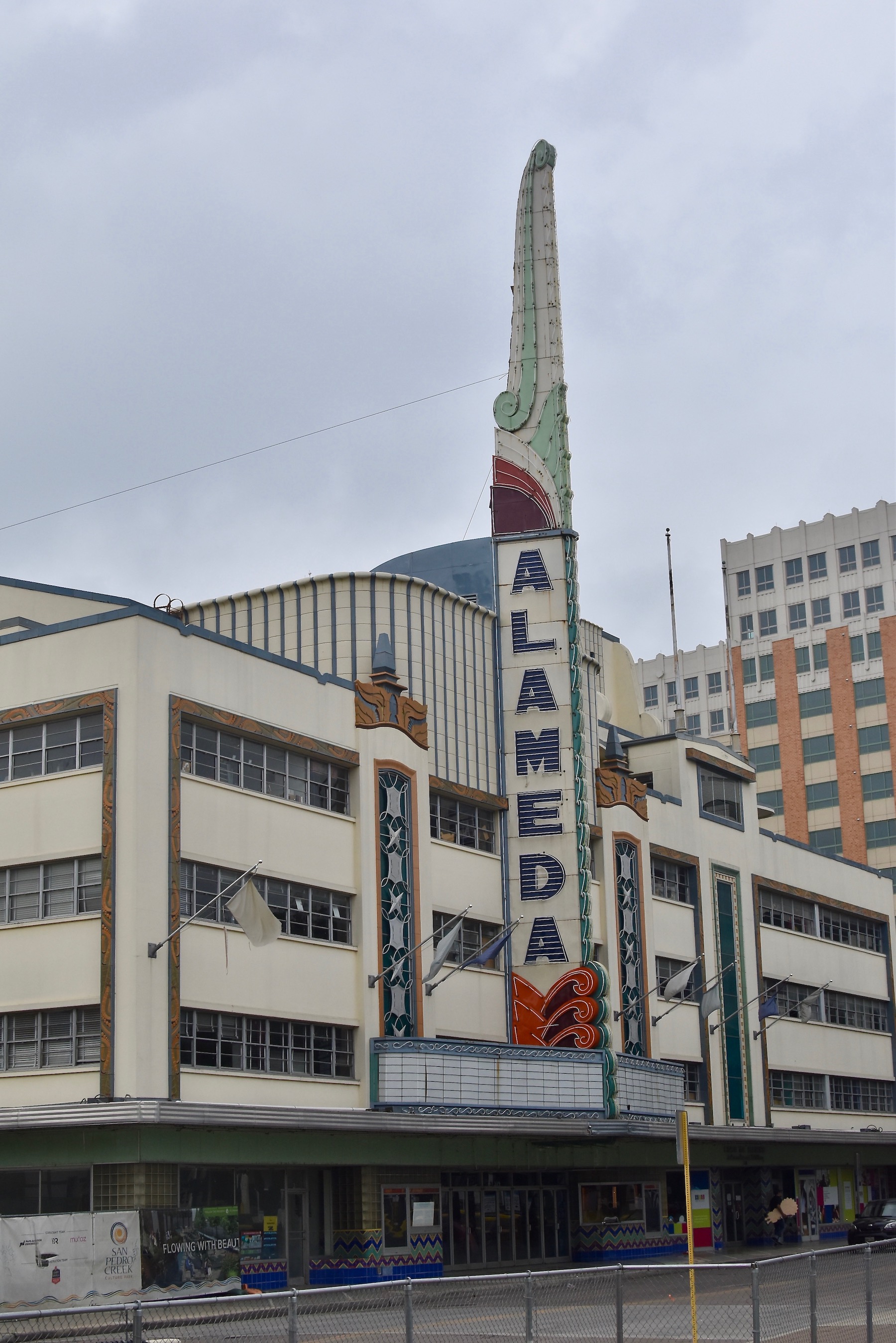 On opening night of the Teatro Alameda, two large murals welcomed the audience into their new social haven. Several movie palaces adorned San Antonio’s downtown core, but the Alameda specifically catered to the Mexican American community by exhibiting Mexican films. The West Side community now had a cultural landmark in the city to call their own. As audience members sat down, their eyes scanned the west wall depicting the history of Mexico through prominent historical figures and events, a past deeply rooted in their identity. Their eyes turned to the east wall where the history of Texas lay before them, a promising future of integration and innovation. Between these two walls the audience members sat; a blend of Mexican and American culture, linked together through imagery and experience. As the lights dimmed, preparing to screen the latest Mexican melodrama, the walls of the Alameda had one final touch to reveal to the audience; a touch that would reinforce to San Antonio Chicanos that the Teatro Alameda was a movie palace reflective of themselves.

Before the development of the Teatro Alameda, the owner, Gaetano Lucchese began his film exhibition career in a more modest venue. Lucchese entered the film world when his father bought the Red Wing Theater to expand the family’s shoe-making business. The old theater still had functioning projectors, screens, and seating. Looking to make use of the equipment, the Luccheses moved it all to a location on the west side of the city, on Commerce and Laredo Street — the very heart of the Mexican community. The venue was small, with only 250 seats, but it was sufficient to start a modest new enterprise. With its location on the West Side, the new Lucchese theater catered to the Spanish speaking community of San Antonio. The theater became the Zaragoza.1

The success of the Zaragoza led to Lucchese opening several other theaters for the Mexican American community. The Luccheses opened the Teatro Nacional in 1917. Situated right next door to the Zaragoza, the Nacional contrasted with its sibling by being better equipped to host diverse performers for a larger audience. It continuously attracted folkloric dance troupes, the Compañía de Revistas headed by Guz Águila, and performers such as Virginia Fábregas, María Caballé, and María Conesa.2 These performances accompanied Hollywood films with Spanish title cards. Latin American actors found success during Hollywood’s silent film period, including Mexican performers Dolores del Río, Lupe Velez, and Ramón Novarro. Chicano audiences sought these films out.3  As talking pictures started to take over the motion picture industry, however, the West Side community of San Antonio turned away from Hollywood motion pictures and favored Mexican films.

As Mexico produced more and more films each year, Lucchese expanded his market. On July 3, 1942, Gaetano Lucchese opened up a new theater to provide as many of the films from the Golden Age of Mexican Cinema as possible. On the corner of Guadalupe and S. Brazos St., the new Teatro Guadalupe was designed by N. Straus Nayfach and included 862 seats. Promoted as “el cine de barrio más elegante de la colonia mexicana (the most elegant theater of the Mexican neighborhood),” Nayfach blended modern design with the look of the old Spanish missions in San Antonio. Aside from these main houses, the Luccheses ran smaller venues, such as the Azteca, the Hidalgo, and the Teatro Maya. Despite having various competitors on the West Side, such as the Obrero and the Teatro Progreso, the Luccheses dominated the exhibition of Mexican cinema in San Antonio. Despite all the success, however, the West Side was still lacking a grand movie palace.4

The rise of the Lucchese film enterprise follows the same trajectory of the movie palace’s growth. The motion picture industry and exhibitors targeted middle class audiences. Using vaudeville as their inspiration, film exhibitors created the nickelodeon. The nickel theater industry grew in urban areas and made the exhibition of film the focal point of entertainment.5 The Red Wing Theater the Luccheses purchased in 1910 was a nickelodeon presenting San Antonians with silent pictures at an economical cost. By the time the Luccheses opened the Zaragoza, the motion picture industry was well established, presenting narrative silent films targeted at the American middle class. By the end of the 1910s, exhibitors expanded the Nickelodeons to accompany longer narratives by creating an atmospheric setting.

Designers built the movie palace to treat general audiences like royalty. Unlike Italian opera houses, movie palaces removed the hierarchical tiered structure of the auditorium to improve sight lines and create a sense of unity and equality among filmgoers.6 Ushers treated audience members as revered guests as they entered the movie palaces. The main hall presented the elaborate interior design of the palace to the guests: either an exotic version of the opera house or the atmospheric theatre containing an elaborate ceiling with stars and clouds, as if the audience were watching the movie al fresco.7 Murals or statues decorated the left and right of the screens, surrounding middle class Americans with a fantasy world they’d only read about. By the mid 1920s, San Antonio would also have several opulent movie palaces catering to middle class audiences.

To the east of the San Pedro Creek, the rise of opulent movie palaces provided competition to the Lucchese enterprise. In 1916, a year before Lucchese inaugurated the Nacional, the Empire opened its doors to the public. Facing St. Mary’s Street, the Empire featured a post-Victorian design ornamented in several shades of gold.8 The Texas Theatre, built in 1926, hosted the premiere of Wings (dir. William A. Wellman) in 1927. 9  Adjacent to the Empire, but facing Houston Street, the Majestic opened its doors in 1929. In 1926, the Aztec Theatre opened on St. Mary’s Street. The Aztec presented a confluence of Meso-American- Aztec, Mayan, Toltec, Zapotec, and Mixtec- shapes and figures in an elaborate design meant to give audiences the impression of ancient Mexico.10 All these theaters catered to white, middle class San Antonians across the San Pedro Creek.

In constructing the Alameda, Lucchese not only wanted to provide the West Side community with an opulent movie palace, he sought to provide them a home. The Alameda was part of Casa de México, a cultural center serving as a celebration and resource provider for the Mexican American community. West Houston Street served as the cultural epicenter for Mexican downtown San Antonio. This area of downtown San Antonio also provided opportunities for other ethnicities. The Jewish, Italian, Greek, Lebanese, and Chinese population of San Antonio interacted with the Mexican American community, creating a diverse community with thriving businesses. As a descendant of Italian immigrants, Gaetano Lucchese understood the importance of cultivating culture. The Casa de México provided this multi-ethnic region a home for Mexican pride and culture that rivaled anything on the other side of downtown.11

The successful partnership between Lucchese and Nayfach continued with the Alameda. Nayfach incorporated traditional Mexican design and color to the Streamline Moderne style of the architecture. Streamline Moderne emphasized smooth curving forms and long horizontal lines. The facade of the Alameda exemplifies the moderne style, with a clean, aerodynamic look. The moderne style, blended with vibrant ceramic tile, harkened back to classical Mexican design elements. Other theater venues in San Antonio had similar flourishes, such as the Aztec. The difference between the two theaters, however, was that the Alameda was a venue specifically designed for the Mexican American community. Nayfach presented a clean, elegant style that looked to the future of the West Side, while celebrating the past. The most striking element of the Alameda’s facade was the marquee. Measuring 86 feet in height, the word ‘Alameda’ is spelled out vertically in cold cathode light, which illuminates four times stronger than a neon light. The brightest and largest sign in San Antonio belonged to its Mexican Americans. The sign called to them, bringing them to the Casa de México, a building designed to serve and celebrate Mexicanidad.12

On opening night, the bright Alameda sign invited the Mexican community downtown to celebrate its new movie palace with an elaborate gala. The exterior welcomed its guests with ceramic tile painted in teal and cobalt, with yellow trim and orange flourishes. The motif continued past the exterior doors. The interior presented audiences with beautiful light fixtures and Plexiglas with delicate etchings, welcoming them into their home.13 The spectacle awaited the audience as they travelled down the main hall and into the theater. A large curtain covered the main stage, yet to reveal the film and performances. In the meantime, two large murals on each side of the stage occupied the audience’s gaze.14

The large murals on either side of the main stage not only represented the identity of the audience, it also represented the elements that formed San Antonio. A deep sapphire provided the background of the murals. Pink, red, and orange colors filled in the shapes, with gold, topaz, and diamond colors outlined the shapes. The audiences saw the history of Mexico presented on the west wall. Iconic architecture and historical figures of the Independence and Revolution filled the rest of the wall. The audience followed the trajectory of the narrative to the east wall, where the story of Texas unfolded. Unified, both walls presented the audience with their living history. As the lights to the theater dimmed, the audience situated themselves for the night’s attraction. The audience turned their gaze to the main stage, awaiting for the show to start, but they stopped, awestruck. Instead of being shrouded in darkness as the audience awaited the light from the stage, the theater became illuminated. The audience focused on the walls. Refusing to disappear in darkness, the story of San Antonio shone brightly from the murals surrounding the audience.15

To create the illumination effect, the murals in the Teatro Alameda used innovative paint techniques. A local sculptor from San Antonio, Pedro Teran, designed the mural and it was painted by Frank Lackner. He outlined the murals in black and then painted them in with fluorescent paint. Black light illumination created the glow-in-the-dark effect, which is exaggerated by the dark backdrop. Lackner layered the various shades of color to produce a blending effect. The murals provided illusory depth and the audience shared in a communal revelation. Lucchese and Nayfach provided them with a home and a celebration of themselves. The curtain rose and the audience turned their attention to the main stage.16

Throughout the rest of the opening night of the Alameda, the audience celebrated the Mexican performances offered that night. Gene Autry sang to the tejano audience. The tanda de variedades presented the latest Mexican vaudeville performers and the audience wept as Agustín Lara pined for the love of Ninon Sevilla in Revancha. Once the show ended, the audience clapped and cheered, making the opening night gala a success. The Teatro Alameda was the crowning achievement of Lucchese’s lucrative exhibition career; a gift to the Mexican American community. The Golden Age of Mexican cinema continuously provided cinematic masterpieces throughout the 1950s, and the Alameda exhibited them. Time and again, the West Side community returned to the movie palace designed specifically for them. With each performance and each screening, West Side residents celebrated their heritage. The Alameda stood tall and proud, awaiting the community for every spectacle. And the mural embraced them each time they entered through the palace’s doors, reminding them of their significance. The Alameda continues to tell their story, well after the last curtain call.