Segregation and Activism: Then and Now on the Eastside 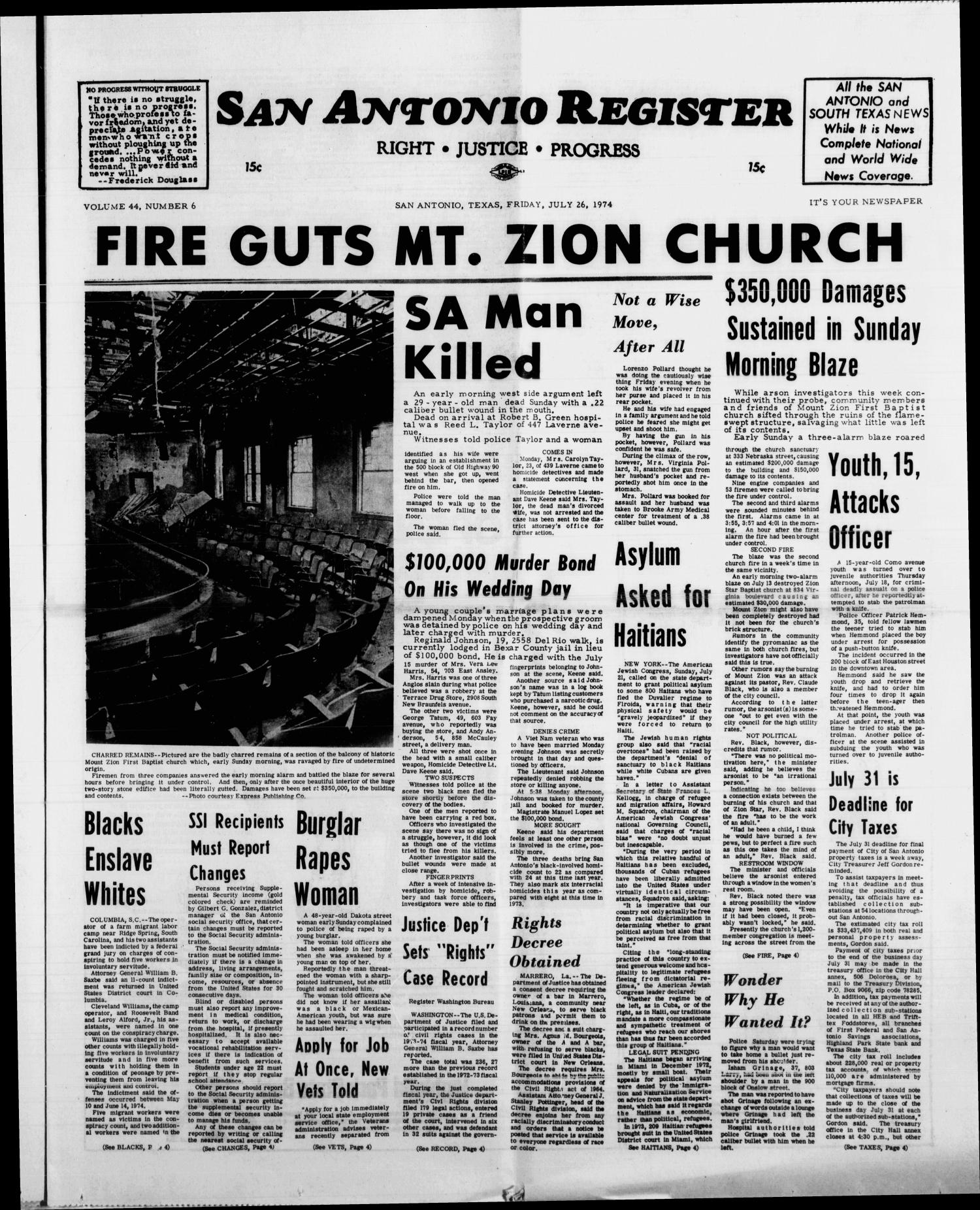 Early one Sunday morning on July 21, 1974, Mt. Zion First Baptist Church members awakened, not from the alarms of clocks set to be ready for church, but from the sirens of three different departments that filled the morning air. The lights colored the sky red, blue, and white. The colors of freedom ironically were driving to put out the flames of a wretched act. This was the second fire in a week that occurred at the church. The first fire that occurred on July 13 was just as devastating. The church was left with nothing but debt — the total cost of the damage was estimated to be around $350,000. They gazed upon the First Baptist being engulfed by flames, disheartened.1 Earlier that year, the reverend of the church was the victim of a drive-by shooting. No one was found guilty of the crime.2 This was not the first time that Mt. Zion had been the victim of hateful acts and violence. Why has this church received so much hate? Mt. Zion is a historic African American church, founded by free slaves on the east side of the San Antonio River in Texas. Because of this legacy, this church is rich with history that cannot be destroyed.

When the first settlers established the city, they designated that Black members would live to the east of the San Antonio River. Twenty-two slaves made their mark on the East Side when they established a church in 1817, with only one white missionary, the Rev. J.P. Hines. The fire damaged the church twice in 1890, but church members rebuilt it.3 Mt. Zion has contributed greatly to the Eastside because it has helped the community grow stronger. Mt. Zion filled and responded to the needs of the community and the larger city. People in the community put in a lot of time to help do this work. In 1951, purchased a home just north of the church that is known by the community as “The House Next Door.”4 In 1957, a day care was opened by the members. On April 12, 1966, they were granted a charter for the only black church-sponsored financial institution in San Antonio. 10. “Claude Black born”, https://aaregistry.org/story/claude-black-born Accessed May 6, 2019] Members dedicated this church to the civil rights movement. Reverend Claude Black Jr., who led Mt. Zion, was a key figure in the civil rights movement in San Antonio and the South.

About thirty years prior to the fire, the Rev. Black was studying to become a doctor but felt a call deeper in his soul to go into ministry. He graduated from Andover Newton Theological School.5 He traveled around seeking positions as a pastor, finding some in Massachusetts, one in Corpus Christi and finally one in San Antonio at Mt. Zion First Baptist Church in 1949. Here he found his true calling of giving back to the community he grew up in and fighting the social injustices that the Eastside faced.

In 1868, the 14th and 15th amendments gave black people equal protection and the right to vote. Many felt the country was finally going in a step in the right direction. It had been two years since the Civil War ended and five years since the Emancipation Proclamation. However, this was still not enough. Racism was still deeply embedded in American culture, especially in the deep-south states that were once part of the Confederacy. The total population of the United States in 1870 was 38,558,371, and the black population was about 4,880,009 including slaves and freed persons.6

The population did not have the backing nor numbers to push on their own terms, but the terms of those who skinned glowed with privilege and basic rights did. This led to the emergence of the “Jim Crow” laws in the late 19th century. These laws segregated public facilities, towns, and schools. Interracial marriage was illegal and most black people were unable to vote due to failing voter literacy tests.

During the Civil Rights Movement in San Antonio, Texas was a quiet town in comparison to other southern states but this does not excuse the hateful actions toward minority communities that took place. The population of San Antonio in 1960 was 588,000. About only 41,605 Black people resided in San Antonio, increasing by 12,876 since 1950. By 1960, the black population made up about seven percent of the city’s residents.7 Although the city never passed a segregation ordinance, the culture and Police Department enforced the separation. Black people were restricted to living in only certain areas of San Antonio due to redlining. Although racial tensions existed, there were no white supremacist movements.8 The black community did not receive the same amount of resources that other communities got. Although the Mexican American community was also segregated on the Westside, they had civil rights and social privileges that Black people did not.9 The Westside helped blur the lines of segregation and the fight against colorism once they were aware of issues that were going on.

Throughout the late 1950s and 1960s, the Rev. Black organized marches all over the state of Texas alongside state Representative G.J. Sutton and San Antonio activist Harry Burns. He challenged the San Antonio mayor Walter McAllister and Texas Governor Price Daniel for their complacency and establishment of unequal treatment and negative attitudes towards minorities that existed in San Antonio. In 1952, Black attended a city council meeting to voice his opinion. The council ignored him every time he tried to speak. He wanted to be acknowledged not only for his own sake but for the black community. Finally, they addressed him, but with a racial slur that boomed on the council member’s microphone, exposing the racism and tensions that still existed in a town that was built by people of color.The Rev. Black associated with well-known civil rights movement leaders such as Martin Luther King, Thurgood Marshall, and Ella Baker, not knowing that he would become an icon limited to San Antonio but also the South and Baptist community. 10

A massive demonstration against police brutality was hosted by the San Antonio Student Nonviolent Coordinating Committee, which took place downtown. Nothing like this demonstration had ever taken place in San Antonio before. SNCC-Panthers organized the march for Bobby Joe Phillips, a man beaten to death by the San Antonio Police Department. They marched during the Kings River Parade, triggering an armed attack on the SNCC offices. The Rev. Claude Black offered his support after the event. He began allowing different activist groups, like SNCC-Panthers and the San Antonio Committee to Free Angela Davis to use the church to hold meetings and raise funds.

There he stood, staring at the fire, watching it lick the walls, pews and pulpit on a summer morning. As an icon and leader of the community, he knew he had the responsibility to take on, this was his meaning in life. Helping the community and giving back. As the expenses were calculated and examiners were finished at the crime, rumors began swirling like flames from the fire. The rumors were about the intentions behind why the church was set up in a blaze. The San Antonio Register questioned the Rev. Black if the fire was perhaps intended to make a statement towards him being a council member.  The Rev. Black had just become a council member the year before and ended his term in 1978. However, he voiced strong confidence that the church was not under attack but of his position but because a person had strong hate in their heart. He reported to the San Antonio register that this was not a child’s or teen’s game but an adult who was “an irrational person.”11

The Eastside is still known for being the Black community in San Antonio today and it is still very underfunded. I conducted an interview for stories about the Westside and a resident from the Eastside, Fransisco shared his story with me. Fransisco is studying Environmental Sciences and working with children through tutoring and teaching different sports all over San Antonio. When I was asking him about his connections to the Westside he answered, “I know I get in political debates with my colleagues about how the Eastside is a little more deprived than the Westside.” He continued to share his story about going to high school on the Eastside and how low the graduation rate is and how much lower it is for the students to go to college. His final remarks about the Eastside were,

“I think it feels neglected, I know the Westside is given lots of opportunities and it is heavily focused on, which is amazing. But I think they should look at the Eastside. The programs they already have there they should give us, it’s about equity.”12

He expands on his own struggles and why he is passionate about giving back to the community that gave to him when he was in his time of need. He also shared stories of discrimination against him while shopping at Whole Foods and volunteering. He finished the interview by sharing his finals thoughts with the political climate and the communities that are most impacted are low income. The culture of those who live there is full of rich culture and history that can never be destroyed. This is something that is still occurring to this day with social activists that still continue the hard work.13

The Rev. Black left a strong legacy that  still resounds very strongly within the community of the Eastside. Social activists like Mario Salas and T.C. Calvert worked with the Eastside to help the community flourish. Salas once worked with the Rev. Black and is faculty at the University of Texas in San Antonio.  He has been an advocate for the Eastside since the 1970s. Salas was a key member of the SNCC-Panthers chapter in San Antonio and a founding member of other activist groups including Organizations United for Eastside Development, the Black Coalition on Mass Media and Frontline 2000. Calvert created a community-based and organized group, the Neighborhoods First Alliance, which advocates for  environmental justice, safe and affordable housing, health care and education. He is also the founder of the San Antonio Observer and nonprofit community radio station KROV-FM. 14