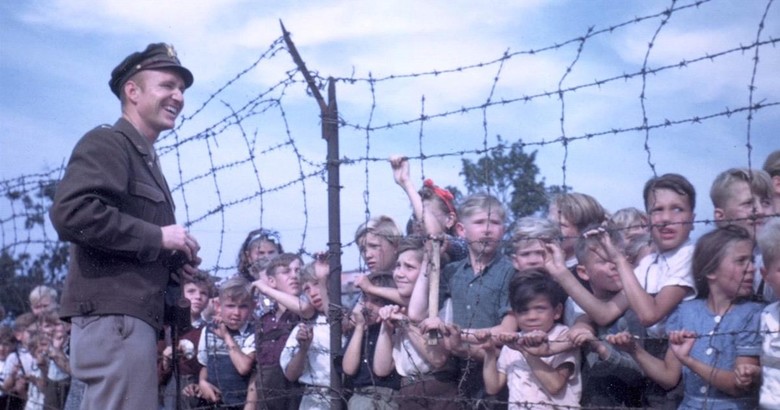 German children cluster in small groups around the barbed wire fence, talking and chatting among themselves. As their anticipation grows, more and more children arrive, until there is a bustling mass of humanity, dozens of young ones strong, waiting excitedly as one. The loud roar of a jet engine splits the air, as a Douglas C-54 Skymaster thunders overhead, flying low to the ground as it approaches Tempelhof Airport. As the cargo plane makes its final approach, it deviates from its assigned path and flies over the outskirts fenced off by barbed wire that surround the Base. It waggles its wings, releasing dozens of small bundles with handkerchiefs tied on as parachutes, before turning back towards the base and making a successful landing. As the small packages float down to the ground, the children cheer and race to claim packages and open them.

Meanwhile, the pilot – Gail Halvorson – thought he had once again remained undetected in his good deed. After all, he had been dropping candy and chocolate already for three weeks for the German children lined up at the fence, eagerly anticipating the drop, and looking towards the airport. The pilot had not been caught yet. But this time, it was different. Someone had seen him. A journalist, who happened to be in the area, had almost been hit by one of the candy packages and managed to snap a picture of the plane in the middle of the airdrop.1 Little did Halvorson know that his life was about to change.

In 1948, Halvorson, an Air Force pilot assigned to Operation Vittles, an operation better known as the Berlin Airlift, started an act of kindness that earned him the name of the “Berlin Candy Bomber.” The city of Berlin had been carved up into zones by the Potsdam Conference, which gave control over certain parts of the city to the Soviets and other parts to the rest of the Allies.2 The US, United Kingdom, and France worked together to airdrop supplies into Berlin for over a year because the Soviets had shut down all ground supply routes in and out of the city of Berlin isolating the Allied troops in the respective zones that they controlled since the end of the WWII.

Three weeks earlier, on one of his days off, Halvorson who enjoyed videography as a hobby, hitched a ride on a friend’s plane at Tempelhof airport. He began filming the aircraft landing and taking off. Noticing a large group of about 30 children outside the barbed wire fence that protected the airport, he wandered over to try to talk with them using what little German he knew. As it turned out, however, one of the children spoke English, and with him acting as an interpreter, Halvorson spent awhile chatting with the children. They thanked him for the work the Allies were doing, but told him to stay safe, saying ‘when the weather gets so bad that you cannot land, do not worry about us. We can get by on a little food, but if we lose our freedom, we may never get it back’.3 Feeling both saddened and proud of the children, Halvorson gave them all the candy he had on him, which was only two sticks of gum. The German children split up the sticks of gum so as many of them as possible got a tiny piece, and those who did not, sniffed the wrappers the gum came in. As he realized that many of the children were hungry and had nothing, he regretted he had nothing more to give them. Moved by sympathy on their behalf, Halvorson told them that he would bring enough gum for all of them in his plane tomorrow, and he would airdrop the candy to them when he was on duty. When asked how they would know it was his plane coming overhead, Halvorson told them that he would waggle the wings of the plane as he went by.4

That night, Halvorson convinced his co-pilot and engineer to help him, and they pooled their candy rations, hand tying handkerchiefs onto the packages to act as parachutes to make sure no-one would be hurt by the airdrop. The very next day, true to his word, he dropped the candy to the children, but realized there was a problem. According to international law, the air zones that the Allies could fly through was narrow, and he was coming dangerously close to breaching one side of the zone.5

Additionally, as his actions were unauthorized and outside the chain of command, he could be court-martialed when his actions were discovered. Deciding to continue, and hoping he would not get caught, he successfully airdropped candy to the children waiting outside the fence. Their numbers grew steadily with each successful run over the next three weeks. That is when the journalist managed to snap a picture of him in action, and blew the secret of the whole operation out of the water. The very next day, the picture of his plane was on the front page of a prominent Berlin newspaper, in an article titled “the Candy Bomber”. With the news out, dozens of letters from Berlin children addressed to “the Chocolate Flyer” and “Uncle Wiggly Wings” started arriving at the Air Force Base.6

The Squadron Commander, Col. James R. Haun, upon seeing the photo in the newspaper was able to identify the plane and the pilot and called Halvorson into his office. Luckily for Halvorson, the Commander liked the idea, as well as the positive press and morale it could bring, so after a long lecture to chew  him out over having hidden his activities from his chain of command, Col. Haun gave his blessing to Halvorson’s mission. In fact, he actually made it an official mission, calling it “Operation Little Vittles” as a play off of the official name for the Berlin Airlift “Operation Vittles”.7

Word of the new operation quickly made its way back to America, where dozens of charities, neighborhoods associations, and other organizations banded together to collect candy and parachutes to send to Berlin, where ‘Operation Little Vittles’ continued for the duration of the Berlin Airlift. Halvorson became the human face of the Berlin Airlift to much of the world, showing a caring and humane side to the world in the aftermath of the Second World War. In fact, Halvorson admitted he had initial concerns about helping anyone from Germany after World War II, but his opinion changed after talking with a fellow pilot, who said, as Halvorson recalls “He told me that it is a hell of a lot better to feed them (rather) than kill them… That is service before self. That is what causes your enemy to become your friend”.8

Near the end of the Berlin Airlift, Halvorson was recalled to the United States, so he handed control of the operation to one of his friends and fellow pilots who were also participating in the operation. Upon his return to the states, he met many of his supporters who had sent him supplies and parachutes, and, many years later, even met a few of the German children he had talked with outside the fence so long ago. In total, Operation Little Vittles dropped over 23 tons of candy using over 250,000 hand tied parachutes.9 The candy air drops changed many lives and Halvorson always enjoyed meeting some of the children later on.

In particular, a meeting one of the young girls is one of his fondest memories. He received a letter from a young seven year old girl named Mercedes, asking him to look for her white chickens outside her house, and to drop some candy there, because she had tried to get one of his candy bundles before, and had failed to do so. Halvorson tried, but could not find her house, so settled for sending her a return letter and candy through the mail. 24 years later, Halvorson was able to have dinner with a female German supporter of his who had been asking to meet with him for many years. After they had dinner, the woman opened her cupboard and showed him a letter, worn and faded with age. At the bottom was Halvorson’s signature, and the host smiled and said “my name is Mercedes”.10 He knew instantly who she was, and asked to see her white chickens, which were in the backyard. That was the foundation of a lifelong friendship between the two of them. Halvorson’s efforts impacted so many people positively. Gail Halvorson’s original solo airdrops, which he tried to keep secret, had grown into something so much larger than him, by making the mission official, the Air Force made an indelible mark on both the pilots and on US history.

Howdy. I’m Stephen Talik, a native Texan born in College Station, and an Eagle Scout. I find history – especially the World Wars, Cold War, and the espionage world – fascinating. I also enjoy learning about the newest and coolest gadgets for technological use and internet security, and watching sports. I have also interned in the Washington D.C. office of a member of Congress, and I am a Political Science Senior at St. Mary’s University.