Gladitorial School: Here is your Diploma and Knife 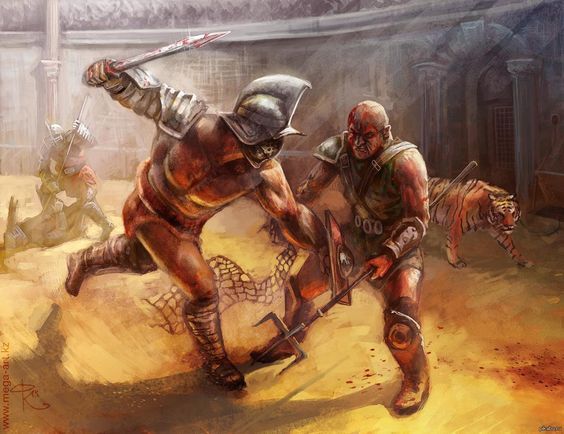 One of the most famous and well known of the ancient Roman games, second only to the chariot races in terms of popularity, were the fights of the Gladiatorial Arena, a combination of blood, steal, and strange looking armor. The tradition of the gladiator fights began in Campania, southern Italy, in 264 BCE, to honor the death of Junius Brutus Pera as part of the funeral celebration.1  The sons of Brutus staged a fight between three pairs of gladiators to honor the loss of their father by the spilling of human blood, and to show his importance to the community with a lavish sacrifice.2 The idea of such a spectacle grew in popularity among the people, especially with the aristocrats that could afford to have such a fight at their own funerals. Over the next few centuries, this spectacle became a munus, or obligation to the dead, at aristocratic funerals, and out of them emerged the Gladiator Schools.

Imagine a prison-like environment full of men in peak physical condition training in various techniques of battle, weaponry, and ways to kill opponents. The person that slept next to you in the cells could well be the very man that would end your life, or take a win away from your record, keeping you a slave before the spectators that watched you fight. To win freedom a gladiator-slave would need twenty-five wins under his name, otherwise his status would never change. There were three ways one might become a gladiator: by being a slave sold to the school or as a punishment to the slave; by being captured by the Roman empire as a prisoner; or by being a convicted criminal. On some occasions, one might sell oneself into slavery to a gladiator school for the potential reward money if one earned freedom through fighting, or if one just loved the feel of danger.3 Along with hand to hand combat training, gladiators would also need to train for fighting on horseback, and learn to fight exotic animals from areas outside of Italy, such as lions, elephants, tigers, crocodiles, bulls, and many other animals the Romans thought would make for good combat entertainment.4

With so many spectacles to see, a trip to the arena was a full-day event, fully free for the public to enjoy involving the entire community. Most often, the entire town population would attend the games, closing most of the city. One of the most famous of the arenas was the Flavian Amphitheater, more commonly known as the Colosseum, built to accommodate fifty thousand sitting spectators with room to stand. The floor of the arena was made of wood, covering a network of animal cages with elevators to raise the animals to floor level.5 During the late Roman Republic and even when it began to fall to the monarchy of the Empire, the games became more of a political strategy for elections and less of a sports tradition being sponsored by the government.6 Being the host paying for the full event was the easiest way for your name to reach the Roman citizens. The more games and events one would host, the more your popularity would grow. The people would vote for someone that had the best intentions for Rome, and who else but the man who paid out of their own pocket for a event of the masses. Come election day your odds would be better to be either a part of or move up on the Senate. To not miss out on the chance of gaining popularity among the public, the editor, or host of the days games, would pay for any expense, including food and drinks. By late first century C.E., military generals, senators, and even emperors spent fortunes subsidizing public festivals and games. Appeasing the masses with entertainment and food would come to be known as the strategy “panem et circenses” or “bread and circus.”7

The day would begin with a hunt or fight between the captured exotic animals and the “hunter” inside the arena. For the animals that did not get killed, they would be trained and do tricks in the arenas.8 Then, when that match had concluded, there would be a type of intermission between the fights around noon, but instead of the crowd leaving for a short break, there would be the public execution of a criminal sentenced to death.9 To keep the events interesting, sometimes the execution would involve a creative death, by having the criminal be forced into the arena and hacked to pieces by the fully armed gladiators, or even crucified. Some would be tied to planks of wood to be thrown to the half-starved animals to be devoured.10 Then the closing events would be the Gladiator fights themselves, where broken men would fight to stay alive.

Beginning life in the gladiator schools is what many would call a version of hell on earth to endure. With the gladiators being made up of mostly slaves, prisoners of war, and criminals condemned to fight in the arena, the physical training was the only way to keep going, sleeping inside cells, living in a prison environment with real no companions, because there was no way of knowing who would be your next opponent. Even for the volunteer gladiators, Roman citizens, who entered for the prize money or wanted the danger in their lives, they became nothing less than slaves to their new master. The volunteer had to freely and willingly take the terrifying oath “sacramentum gladiatorum,” or the Sacraments of the Gladiator.11 With this oath, gladiators swore to endure being burned, bound, beaten, and slain by the sword. Then, one would forswear any desire for retribution for the state one would be in, and finally forswear life itself. Using this oath, one would accept the cruel life of a gladiator, live a life of honor, and to refuse to endure any of the sacraments that would be dishonorable, binding oneself with conviction to a master with what is left of ones honor at stake. One would be a loathsome man without dignity and almost without humanity.12 Being a gladiator, one would be treated however the Lanista, the man that buys and looks after the gladiators, sees fit without any recourse to legal appeal. It was also considered disgraceful for any Roman citizen to debase himself and choose to fight in the arena.13

However, not all Romans share this disdain toward gladiators. If one were successful in the bouts, one could become a crowd favorite, like today’s modern athletes.14 These warriors were also seen as a type of sex symbol, because of their perfect physique, being a perfect physical specimen. Many Roman women would even lust after the gladiators for the very same reasons, which explains why Roman citizens, even those from aristocratic families, chose to join the gladiatorial ranks. Taking more of a philosophical approach for citizens joining the gladiatorial ranks, Roman writers such as Seneca addressed the actual visual spectacle seen by the audience. The witnessing of such bravery while facing death in the arena filled with screaming fans. Even when seen as shameful by the Romans to debase yourself, many citizens would still become gladiators.

When it came to actual combat, the gladiators were no pushovers, although the fighting style was designed to be both deadly and visibly appealing for the fans. There were multiple types and categories of gladiator, but there were four main types that had evolved by the early Empire.15 There were the heavily-armed Samnites, or later to be divided as the Hoplomachus, carrying a spear and a small knife with a round shield, and the Secutors, carrying a gladius and large rectangular shield, both outfitted with helpmates and heavy armor. The second is the Thracian, with less armor and wielding a curved knife, the sica, and a small circular shield, the parma. There were Murmillos, identical to the Secutors except for the fish shaped crest on the helmet. Lastly, there were the Retiarius, who lacked all armor and wore a belt with a loincloth, wielding a trident, a fishing net to snare the opponent, and a knife attached to the belt. When chosen for a fight, the editor would rent the gladiators need from the school in preparation for the event. On the day of the games, the gladiators would enter the amphitheater in a colorful parade, drawing lots to decide the parings. Then an official would inspect that all the weaponry was sound and well sharpened. Finally, all gladiators would raise their weapons to the highest-ranking official in the stadium and recite “Morituri te salutamus,” “We who are about to die solute you!” then the savagery of a no rules fight would begin.16

After a savage and bloody battle, many gladiators would have died, and others would surrender, accepting their defeat from the victor. For the ones defeated, they would wait for the editor, or emperor if present, to pass judgment on them, based on how well the gladiator had fought. If the gladiator was to live to fight another day, the editor would point his thumb down, signaling their fate to live. If, however, the editor pointed his thumb to his chest, it symbolized the piercing of a sword through the heart of that gladiator. If a gladiator was able to win back his freedom after twenty-five victories, then for the rest of his life he would be extremely comfortable, with the money given to the newly free man from the Gladiatorial School as reward money. All oaths taken from ones time as a gladiator would be lifted and the Romans citizenship would be returned for those who volunteered. Being once a slave, gladiators would not be allowed to hold any political status or title in the government. Unfortunately for the gladiators loved by the crowd, the school would rig the fights to keep them from leaving the arena. Keeping them trapped as a slave until another gladiator finally ends their life.