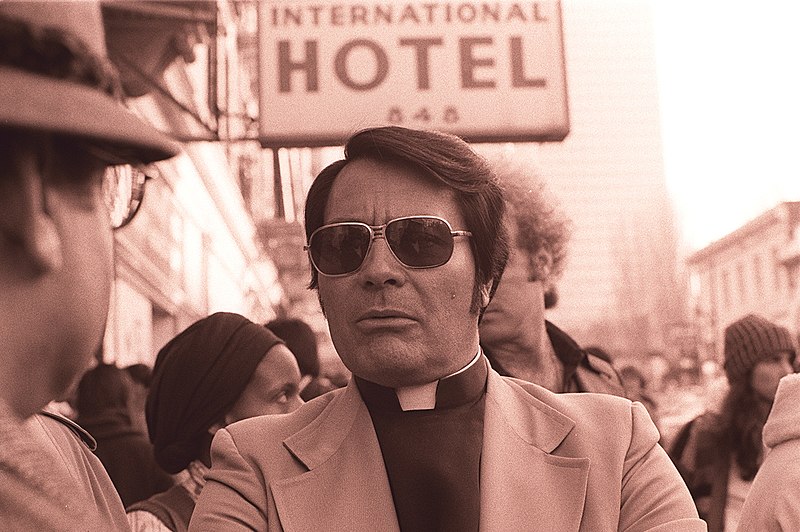 Have you ever heard of the Kool-Aid Massacre? Where one mind-controlling, manipulating man led to hundreds to their deaths? Throughout the 20th century, numerous cults shaped America’s history in terrifying ways. Some of the most memorable have been the Manson Family, Heaven’s Gate, and The People’s Temple Agricultural Project. It takes a second when someone hears The People’s Temple to remember what happened, but usually mentioning the Jonestown Massacre helps them recall the terrors that happened that day.

Jim Jones, a preacher, started The People’s Temple Agricultural Project in the mid-1950s while residing in Indianapolis. The goal of the organization was to fight against racism and poverty, and Jones’ followers were primarily African Americans. Jones believed in Christianity and socialism. His organization “…was dedicated to the pursuit of social justice along Marxist lines.”1 He thought it was unfair that the rich were able to be happy and living a wonderful life while the poor or racially discriminated endured a life of hardships. He believed everyone deserved equality. Jones called his mission “apostolic socialism” through Marxist theology. He invented this term as a way to describe his church as something that used faith healings alongside an upbeat style from black churches. He began to become more demanding of his followers, insisting they call him “father” or “dad.”2 This was the first step in how Jones’ demands would become more of a problem.

Jones eventually moved the organization to Redwood, California because of his growing population of followers. He began calling the organization a church. Eventually he created churches in Los Angeles and San Francisco, where he later moved the his headquarters. He opened up churches in black communities around San Francisco to gain more followers.3 Jones became so popular that he was elected a chairman of the San Francisco Housing Authority Commission.4 This gave him more power and notoriety among the general population. With this much power, expressing his ideas increased the followers he gained. He climbed his way up and made himself a powerful, controlling man through his charisma and ideology. This led to the rise of popularity of his church and influenced even more people to join.

Cults became increasingly popular in America throughout its history because people have found them appealing to their beliefs and values. Some join due to the cult believing in the same values or having the same desires for changes to political or racial relations. Many cults are considered as religious or political based on their values. There are 600 different alternative religions in America and Canada alone that can be considered cults.5Many of the cults in the past represented some part of a countercultural movement happening within America during the late 20th century. John R. Hall, an American author, wrote, “the radical Left and counterculture’s emergence in the 1960s did not go unchallenged. Rather there was a broad-based reaction- on cultural, social, and political fronts.”6 The appearance of cults became more apparent during this time due to the political and social movements that were happening in America. People who were thought of as a minority or people from a lower social class wanted change. These people wanted change so badly that they willingly believed in anyone charismatic enough and who promised to give them what they wanted whether it be money or equality.7

As the People’s Temple grew, the larger population of San Francisco became worried about the church and its preachings. The citizens thought it was strange that the church employed armed guards at all times.8 Accusations spread about the organization participating in financial fraud and abusing some of its members. New West Magazine described Jones as a sexual predator and drug user. The magazine also stated that Jones faked ceremonies where he healed his followers, and he scammed his followers out of their money.9

While being investigated for these accusations and crimes, Jones decided to move his church to Guyana in South America after discussing with his followers. One of his followers suggested Guyana because of the black, socialist leaders in charge of the country. Jones and his followers thought because of that, they would be able to live peacefully in Guyana.10 After all Jones’ followers moved to Guyana, family members became concerned since Jones would not allow followers to communicate with their families in the United States. These family members begged California congressman Leo Ryans to take a trip to Jonestown and bring home their family members. The congressman agreed to take a trip to figure out what was happening after the death of a former temple member who previously spoke about leaving the church. The congressman’s suspicions rose, and he felt he needed to investigate for himself. The trip started out going extremely well. Jones welcomed Congressman Leo Ryan. Jones invited him to have food and attend a musical rehearsal. According to sources, all the followers forcefully pretended to be happy and pretended everything was going fine while the congressman was there. Some families who asked congressman Ryan to take them back to the United States with him. Jones became furious and secretly devised a plan that was the starting point of the deaths for many.11

By promising their followers a new way of life, cult leaders gain a type of control over members’ minds and lives themselves. There is a stereotype within cults that leaders use brainwashing or mind control on their followers in order to fulfill their selfish wants.12 Some cult members lie and pretend to have psychic readings and psychic healings. This leads many people to believe in these leaders and start giving complete devotion to them. Followers begin to see their leader as a “Living God.” This leads to followers enduring physical pain and abuse to show their dedication. There are several ways followers expressed this in the past such as depriving themselves of sleep or not eating the proper nutrients needed for their body.13 If a follower refuses to comply with showing their devotions in such ways or simply want to live the group, leaders execute them. One survivor notes how he wanted to leave, and he received a choice of either being shot or drink poison. Although he escaped, not many were as lucky.14 Eventually this leads to the last devotion any follower gives their leader, their life.

Due to the concern that arose, Congressman Leo Ryan agreed that the people wanting to go home may go with him. Jones showed no anger while Congressman Ryan was there. As soon as he left to his plane, Jones ordered for all of the ones leaving to be killed. There was nine members who went to shoot everyone who decided to leave. Everyone died including Congressman Leo Ryan, who was shot over twenty times.15 Not long after, Jones planned a mass-suicide for all the members to join in. The majority of the members participated in drinking poisoned punch. The children, unaware, drank the poisoned punch first, and then the adults drank the punch next. Armed guards stood ready to shoot if members refused to participate. Guards shot all of the members who tried running away. This resulted in over 900 deaths.16 Jones coined the event as “revolutionary suicide,” and it received the nickname “Kool-Aid Massacre.” These events took a toll on American citizens as it was one of the largest mass killings in history at the time.17

The sad truth is that some of these American cults ended in the death of hundreds. As a last step to show their devotion to their leader, followers willing participate in committing suicide or committing mass murder. This could be done in numerous way such as either injecting themselves or others with poison or killing and taking the lives of innocent people. 18 The followers believe they are proving themselves worthy to their leader by giving this last devotion of taking their lives or others. This ultimately gives the leader the last control over the follower’s lives.

Even though the event that took place was a tragedy, some members escaped and survived the mass-suicide. Jim Jones was found dead with a shot to his head, but there is no evidence to know if he killed himself or if someone else killed him. The rest of the members that resided in California eventually ended the organization. The members that survived went on to tell their stories and how Jim Jones controlled and acted.19 The actions of Jim Jones led to the loss of hundreds American lives in total. Even though these events happened forty-one years ago, it still is one of the most tragic events to happened in America’s history.