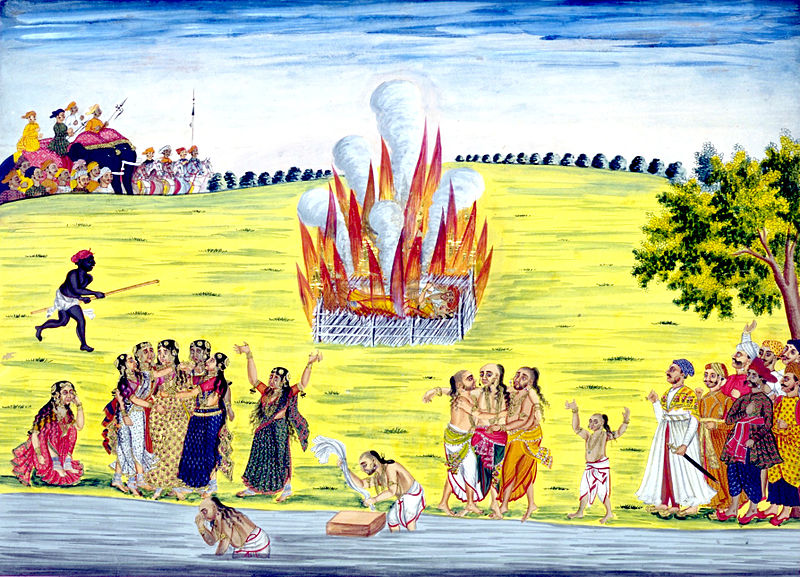 Sati, also known as “Suttee,” was a tradition that was practiced in ancient India from the early centuries BCE to the mid-1990’s. In this tradition, widows were burned at the side of their deceased husbands. There were many reasons behind this tragic form of suicide, but the act was seen as heroic and courageous. The tradition originates with the goddess Sati, who burned herself to death in a fire that she created through her yogic powers, which she obtained after her father had insulted her husband. Sati became an option for women in India who were not “marriageable,” according to social norms. Sati was first recognized in the Mahabharata, one of the two most well-known and important poems of India.1

“LAMP of my life, the lips of Death
Hath blown thee out with their sudden breath;
Naught shall revive thy vanished spark . . .
Love, must I dwell in the living dark?” -Suttee by Sarojini Naidu2

The practice of Sati is recounted by a first century BCE Greek author named Diodorus Siculus. Diodorus mentioned sati stones, which were memorials of all of the wives that have passed along with their husbands. A stone was created for each wife after she gave up her life, and these stones were all collected into a shrine. The earliest memorial that has been discovered dates from 510 BCE.3

Another practice that branched out from sati was the Jahuar, which was a sacrifice of any Muslim woman from the twelfth through the sixteenth century. It was believed that if a woman was burned, she would be safe from rape, which was worse than dying at the hands of a conquering enemy.4

In 1829, when India was informally ruled by Great Britain, the law to make sati illegal was passed because the act was seen by the British as harsh and cruel to women. Although it was made illegal, there were controversies over whether the sati practice was a religious act, and if so, should that be taken into consideration before prohibiting it.2

In 1987, Roop Kanwar, a woman from the village of Deorala in Rajasthan India, was married to her husband for only eight months before he died. She decided against taking her life in front of thousands of people. Politicians and activists believed that Roop Kanwar was then subsequently drugged by the liquid inside the seeds of an opium poppy flower, and  pressured to take her life by those around her. Some people even say that she had super natural powers because her eyes were glowing bright red as she burst into flames. Police concluded that a group of men had been guilty of having drugged her, and they were placed under arrest.7

Sati was a rather harsh tradition, but the significance of these rituals was important to many Indian traditions. The thought of self sacrifice in this way is foreign to Western traditions, and the thought of being burned alive is worse. Sati is now illegal and no longer practiced, but the memories of the dead women from this tradition remain and they will always remind us of this social practice.8

This article goes over such a morbid topic, how women are to live in relation to the passing of their husbands or themselves. That if he were to pass before her, his inheritance skips her and would be given straight to his children is sad. It, in a way, devalues her worth to him and its awful learning that widows in Sati were burned because it was better than dying from a hypothetical reason. Women were treated cruelly and a lot of it was because of traditional beliefs and customs.

This topic is incredibly morbid one and goes to show how some traditions in India have been very unfair to women. The fact that this one would be one to live on is unfortunate and heartbreaking. I am a Hindu person and have never before heard of it. So, it is fair to say that it is not a common practice anymore.

I find it so interesting that women dedicated so much of their lives to men. It has not been too long that women are looked at less than a man. It’s hard for me to imagine owing portion of myself to a man, and women in other countries believe otherwise. Women for centuries have been heavily influenced by men in what to believe, and personally I believe any woman is capable of a successful life without help of man.

Indian culture is one that has always been odd to me. On one hand, Stories like Gilgamesh teach one to ‘continue living’ after a loved one has past, while practices such as these emphasize the ‘I cannot live without this person’ loyalty in love. I originally heard about this practice in a news report on India from several years ago, focusing on the very subject of Sati, which said that there are still rural communities that still practice it. It said a lot of it came from social pressure, and when I hear that, I think ‘ how could these people do this to those poor children, that poor woman’.

I think the article was very interesting as there are many social and cultural practices that were frowned upon quite heavily by people in the western hemisphere. We too have our own practices that were eventually condemned by society but looking into this case we see a lot of it stemmed from male dominance in society. Since the beginning of time women have not enjoyed the same rights as men, even for the sake of being deemed a person, but the extreme measures taken against women in some cultures are insane. Of course, at the time of this practice it was the societal pressure for the sake of public praise or women sacrificing for their children. It is upsetting that even when a woman at the time denied this form of torture men still took the choice away from her because of differences in perceived human worth. Learning about Sati is important because history can always repeat itself in one way or another.

It is sad to learn that women would die alongside their deceased husband and that it was seen as courageous for throwing their lives away. It also makes me wonder how the life of a widow would be in India back then. A widow could have had a tough life without the support of the husband and they would rather die alongside him.

This practice is horrific. I cannot believe that it was still practiced in the 1980’s. A lot of people believe that humans are better (morally and educationally) than those of their ancestors. This article proves that the idiocy of some traditions still lives on through barbaric means and small-minded people. The idea of self-suicide to join their dead husbands is ghastly. If the tradition were reversed, would it still be practiced? I believe that if the men were required to die, this tradition would have died out long ago. I do not understand how these people morally justified the murder of a woman because she decided to not participate in self-suicide.

I found this article intriguingly morbid to read and reflect on. As a young woman, I cannot imagine relying so heavily on my husband, to the point where I would rather take my own life than remarry. However, because of the patriarchal approach to society, traditions such as this one were often the only outcome perceived by society. As unfortunate as this tradition was, this article was incredibly well written.

The way this article has described the difference between satti and jawhar is very detailed and my heart wrenched when I read about the woman Roop Kanwar and what happened to her as I am originally from India and I knew about this practice very well there one thing which interested me the most is that how accurate this article is about the information is on the inheritance of property part. While this topic is still very sensitive in India one thing I know for sure is that now satti is completely eradicated and hasn’t been reported for a long, Yet it is disheartening to think about the lives of women during that time the things they have gone through. I am glad this is not practiced anymore.

Practices such as what you described in this article are unimaginable and an example of how far equal rights for women have actually come (although there is still a long way to go). Imagine women being burned because their husbands died, or just as a sacrifice to prevent their own rape. These make no sense to us, and it is impossible for me to put myself into that era and understand the social “norms” and why they exist.