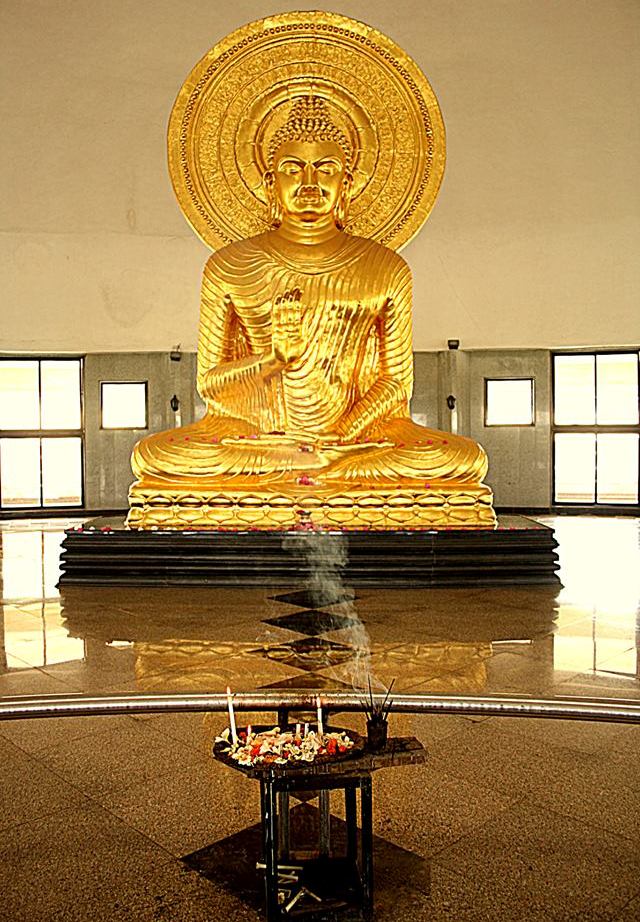 According to Buddhist myth, one summer night Siddhartha Gautama observed his wife and his son sleeping. He thought if he would embrace them, he would never be able to leave. He turned away and left the palace, to seek Enlightenment, to seek, Nirvana. “Siddhartha’s dissatisfaction with his luxurious existence reached a head when he was twenty-nine years old, when he made the decision to leave his family home and his life of luxury, and to become a wandering seeker after the truth, his only possessions a begging-bowl and a simple robe.”1

Siddhartha began practicing an ascetic lifestyle, having already left material possessions and mastering gurus’ teachings and yogic ways, he felt dissatisfied and unable to answer still the solution to pain and suffering. “On going forth, he avoided evil deeds in body. Abandoning verbal misconduct, he purified his livelihood.”2 Siddhartha subjugated himself to the elements, meditating many hours, and barely eating to stay alive, he brought his physical body to a near skeletal state. “Simply from my eating so little, my limbs became like the jointed segments of vine stems or bamboo stems…. The gleam of my eyes appeared to be sunk deep in my eye sockets like the gleam of water deep in a well…. My scalp shriveled & withered like a green bitter gourd, shriveled & withered in the heat & the wind.”3 Nearing death, and still not having attained truth, he remembered a day in his youth. “I recall once, when my father the Sakyan was working, and I was sitting in the cool shade of a rose-apple tree, then—quite withdrawn from sensuality, withdrawn from unskillful mental qualities—I entered & remained in the first jhana: rapture & pleasure born from withdrawal, accompanied by directed thought & evaluation.”4 He realized the beauty of nature as it is, and he found a pleasure in nature that did not take hold of the mind and body in a negative manner. Coming to the conclusion that he could not maintain this state without food, a girl offered him a bowl of rice. The five ascetics he associated with soon looked down upon him as they found him eating. Siddhartha was near awakening; he knew he could not look externally to find the answer to the end of pain and suffering; he knew he had to look internally to find the truth.5

“He sat down under a bodhi tree in the shelter of the natural world in all of its beauty and fullness, and he said I will not move from this place until I have solved my problem.”6 Siddhartha meditated under a Bodhi tree during a springtime night. Mara and his demons appeared and fired their weapons at the meditating Siddhartha; he remained at peace, and the weapons turned into flowers. Mara then used his three daughters to try to seduce Siddhartha. Siddhartha did not move at all from his position. For the final test of Mara, he asked Siddhartha who would be his witness for his worthiness to obtain Enlightenment. Siddhartha Guatama reached down and touched the earth. The earth tremored, and Mara’s demons vanished. “The Earth is my witness,” Siddhartha said. He meditated all night, able to see his previous lives and all the workings of life as it is, reincarnation and its place in the Universe. “Through the round of many births I roamed without reward, without rest, seeking the house-builder. Painful is birth again & again. House-builder, you’re seen! You will not build a house again. All your rafters broken, the ridge pole destroyed, gone to the Unformed, the mind has come to the end of craving.” Siddhartha Guatama had reached Nirvana, he had reached Enlightenment.7

Soon after, Siddhartha Guatama, now the Buddha, or “Enlightened One,” came across the five ascetics who had previously disowned him when they found him eating. To them he taught what he called “The Four Noble Truths.” “Now this, monks, is the noble truth of stress: Birth is stressful, aging is stressful, death is stressful; sorrow, lamentation, pain, distress, & despair are stressful; association with the unbeloved is stressful, separation from the loved is stressful, not getting what is wanted is stressful. In short, the five clinging-aggregates are stressful.”8 Buddha would continue to teach in the Deer Park at Sarnath about the beginning and end to,”stress”, or pain and suffering in life. Nevertheless, his enlightenment started a journey of teaching all the way to his death.9

I found it really interesting that they made a part two to the article. It was a way for them to give the reader the opportunity to learn more information about Buddha. I really enjoyed reading the articles and learning more about it. His story as to how he became the enlightened one was so intriguing. He went through many tests in his life that led to that happening and the stories make me want to keep reading about the religion. The part that interested me the most was when he came across the four noble truths and learned about each of them.

What a great idea to turn this story into a little saga! Buddha was most definitely a great teacher, so full of wisdom and grace. His lessons were valuable ones, advocating tranquility within oneself to extend outward into the world. Of course, all this is with the hope of attaining Nirvana and breaking the cycle of reincarnation for oneself, but it certainly has the merit of making peace with everything around you, even suffering and death.

Siddhartha reaching Enlightenment is quite a fundamental story of the Buddhist faith and principles that unify Buddhists. Mara and his demons are almost similar to Satin and his demons. Mara and Satin both try to tempt Siddhartha and Jesus, because they try to stop them to reach to perfection and holiness. I enjoyed reading this article, because I gained a little more knowledge about the Buddhist story that initiated Buddhism.

I have always been interested in learning about other religions. I found it truly interesting how you described Siddharthas journey toward nirvana and the founding of a new religion. I can not believe how truly devoted he was, that he gave up everything he had including his family. It was truly eyeopening how he took comfort in nature rather than materialistic things. I think that todays generations could learn from his teachings and discipline!

I liked that the article was written in two parts, it is more in-depth and a nice before and after of a historical and religious figure. I find it interesting that even though he was looked down on for accepting the rice, he went back to teach those who looked down on him. This is very kind and sends the message that finding inner peace is more productive. I think that since Gautama had to leave his family in the first place to be a holy man, this was the most difficult challenge, and all the other ones sent by Mara were not as effective on him.

I enjoyed this article, and it did a good job continuing where part 1 left off. The decision to make this topic into two separate articles was a good call, it allowed for more to be said without making the article overwhelming. The story of how Siddhartha Gautama became the Buddha is an interesting one, he left his life behind to find answers and was on the brink of death until he finally came to his realization. This article was really well done.

I believe that Buddha found a good middle ground between asceticism and living a normal life. Asceticism seemed a bit senseless in its rejection of everything pleasurable including things like eating, so I can understand why Buddha may have not advocated for that. I definitely believe that he was one of the wisest men of his time and he mad a lot of fantastic points on the origin of suffering in the world.

A well written introduction to Buddha. It explains how he sought enlightenment and finally achieved it. It was through humbling himself and eventually becoming one with the enlightened ones. As said in the beginning of the article, Buddha had all the earthly pleasures any person could desire. He could have spent his entire life as a pampered prince. He chose rather to pursue his destiny in the great truths.

Hello Christian. The part two of your article is also very well written and developed. The search for enlightenment can teach us a lot about life principles. I mean, we can apply Buddha’s teachings in our lives; to live a better life and treat other people with respect and love. I see the enlightenment as a state were people find their purpose, and they are deeply grateful for their lives and the universe.

The part two of your article was great and i was so glad i read your article. It was a great read and what an interesting topic to follow the man who is known to be the Buddha. Thew fact that he starved himself and ate only what he needed to the point he is just skin and bone is crazy and shows how committed he was to what he believed in. Great article again hope to read more of your articles.