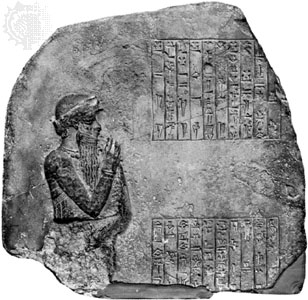 Who would become the first king of the Babylonian Empire as well as gain fame for his creation of a law code? From conqueror to administrator, Hammurabi ruled over the Babylonian Empire during the years from 1792 to 1750 B.C.E.1 Hammurabi improved upon the techniques that the Akkadian ruler Sargon I had used previously to govern, which included bureaucratic rule and regular taxation.2 The most influential contribution on behalf of Hammurabi was his code of law. Although Hammurabi introduced the code towards the end of his reign, it was nonetheless influential.

Mesopotamian Law at that time was the most extensive form of law to have existed.3 The code helped Hammurabi establish order between all the diverse groups of people under his control. After conquering various groups of people, Hammurabi needed to bind these different groups together.4 Hammurabi gathered his people at the city of Babylon and unveiled a stele (stone slab).5 Hammurabi claimed to have come upon the laws through the god of Babylonian justice, Shamash. It was Hammurabi’s belief that the god had chosen him to deliver the laws to his people.6 The stele contained 282 laws to govern the people of his empire.7

Furthermore, the laws dealt with a variety of aspects of human life within the empire. The code illustrated major and minor offenses as well as their punishments. More often than not, the punishments were either death or a monetary fine. The code was written in cuneiform (a writing form adopted from the Sumerians), but the laws were carved in the Akkadian language. An example of the kinds of laws the Code contains can be seen in its first statute: “If a seignior accused a[nother] seignior and brought a charge of murder against him, but has not proved it, his accuser shall be put to death.”8 A monetary example is rule number two-hundred twenty: “If [a physician] opened his eye-socket with a bronze lancet and has destroyed his eye, he shall pay one-half his value in silver.”9

The stele containing the law code was displayed out in the public. The purpose was so that everyone could see the law. However, there was a slight issue: most people at that time were not literate. Therefore, although the law was displayed, very few were actually able to read and comprehend it. The rich and elite were favored while the poor and women were not treated equally. As a result, the Code became a reflection of the distinctions between the social classes, and between gender roles as well.

Hammurabi’s code would appear to be quite controversial and simplistic in the view of modern society. However, the code proved to be effective throughout Hammurabi’s reign. A point of controversy that arises from Hammurabi’s Code is the wording within the code. As opposed to modern law’s use of statements such as “this is not allowed” or “it is illegal to…” Hammurabi’s Code pursued more of “action X results in consequence Y.”14 An example to illustrate such process is as follows: if someone steals something (action X) the result is the death of the accused (consequence Y).

Although society has now progressed beyond the time of Hammurabi in several aspects of human society such as in law, it is important to analyze the roots of those developments. Furthermore, there also lies importance in drawing similarities between the past and modern society. How does modern society differ from Hammurabi’s in terms of social status and laws? Does modern law treat everyone equally in society? If not, then what similarities does modern society share with Hammurabi’s time? Human society is able to gain insight into the origins of contemporary social, political, economic and cultural problems.