Bilingual Education in the Edgewood District for the Past 50 Years 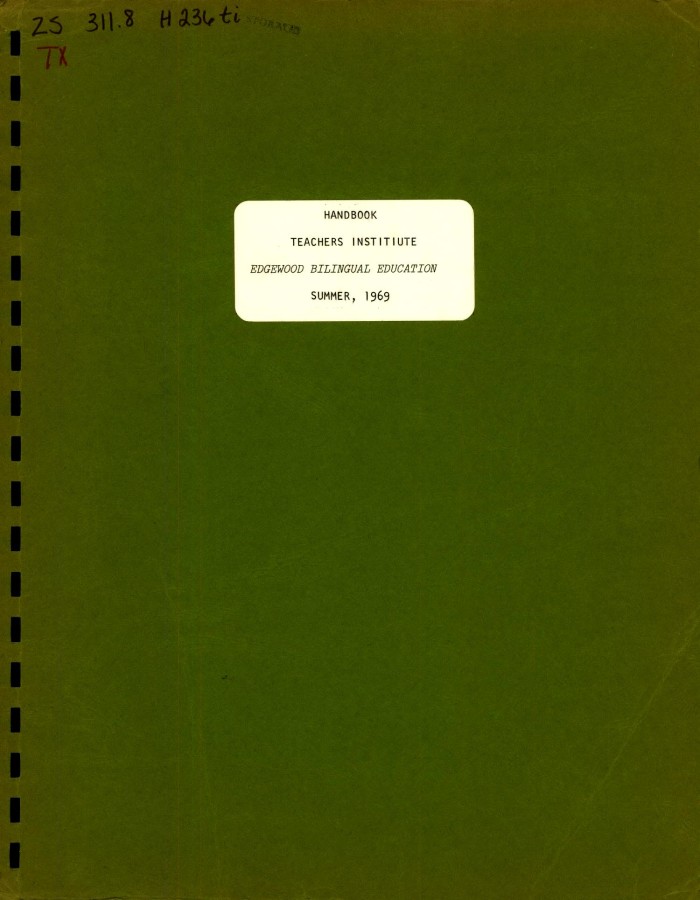 In late-March 1969, professors, activists, School Board members, and education experts flocked to a room at the Gunter Hotel in San Antonio, Texas on a Spring weekend as the end of the school year approached. The Bureau of Educational Personnel Development and St. Mary’s University sponsored this two-day conference. At this conference, attendees discussed ideas for a long-term educational plan for Mexican American students in Texas. This plan brought together ideas and voices not only from the School Board and local teachers but also from Mexican American grassroots activists.

Educators and community leaders were excited about this conference and felt that this was the first time their ideas and troubles would be heard widely. Up to this point, many professionals in the field of education had not seen any use for bilingual and bicultural education. For many public schools, it was believed that this method of education would hinder children’s integration into American Society. Despite these national hesitations, more people than expected showed up the first day of the conference, flooding the event space. To many, this would be a major victory in beginning conversations about how to teach and implement bilingual and bicultural education in U.S. schools.

The conference drew on texts not only from prestigious organizations but also from personal letters from those whom this meeting could affect the most. Organizational texts included one by the U.S. Commission on Civil Rights entitled, “The Education of the Mexican-American in Texas, the Challenge, the Conscience of the State,” and the report from the National Advisory Board to the U.S. Office of Education the Mexican American Affairs Unit, “Mexican-American Quest for Quality.” Included among these official documents and prestigious speakers, there was a letter written by a young man in 1969 who had experience with the education system as a Mexican American. He wrote about how these schools made him feel as if he, his culture, and his language were not important. He wrote, “I see that because I am a Mexican-American and I have a language barrier, a lack of cultural identity and have received an inferior education.” Stories like this were all too common throughout the United States in areas that were plentiful with Mexican American immigrants and their children.1

In 2019, fifty years after this historic conference concluded, a woman who was a student in the Edgewood education system when this conference took place interviewed with me. Both the letter referenced above and this woman’s interview fifty years later show disappointment in the educational system that existed for Mexican Americans in the the late-1960s.

During 1968 very few educational programs used Spanish in a bilingual setting, and of these, most allowed only the use of “Textbook Spanish.” This term means that the language needed to be grammatically correct, and, in many instances, needed to use Spanish derived from Spain rather than Mexican Spanish or colloquial Spanish. I have given my interviewee a pseudonym to protect her privacy.

My interviewee, who I will call Mary, reminisces on this idea of Spanish in schools at the beginning of her interview. She went to grade school in the Edgewood District, and was told by teachers that she was not allowed to speak Spanish within school grounds. Her family decided that it was best if she was not taught the Spanish language and was unable to connect with that side of her culture. As a young girl, Mary went through her elementary and middle school classes speaking only English inside the classroom and her school campus. In high school that changed. When she went to her classroom and sat down at her seat, she was informed that her school was adding a new language credit. Still, it was not until the end of her school career when she could take Spanish as a language.2

Unlike other schools in affluent districts who had the opportunity to learn Spanish as an elective years before then, these language classes were new to her district and something that she had never experienced before. She was excited initially and felt it to be something that supported her diversity as a bicultural student. However, when she got to know more about the class from her teachers, she realized this Spanish was not the Spanish she knew, but a dialect from Spain, a country across the ocean. Mary felt her district was disingenuous in wanting to offer a learning opportunity about her culture and life as a Mexican American.

In 1968 the average educational level completed by Mexican Americans in the United States was 6.3 compared to the national average of 11.2. At this time 89 percent of children with Spanish surnames in Texas would not graduate from the 12th grade. These numbers showed the limitations of Mexican American education in Texas at the time. These graduation rates were not helped by standardized tests that were only distributed in English. During this time, close to 58 percent of students in San Antonio Independent School District (SAISD) were Mexican American while only a fraction of teachers within the district were Mexican American. Of these teachers who are distributing the standardized tests, only 10 percent had Spanish surnames. This information shows that there were large amounts of misconnection and miscommunication between teacher and students im the classroom, which resulted in lower test scores and lower education levels.

In the summer of 1969, the Teachers Institute created a handbook for “Edgewood Bilingual Education.” It stated, “Teachers may thus comprehend the social changes occurring in their environment and consequently find themselves more capable of guiding bilingual children through the social, psychological, and emotional adjustments which arise in the transfer from the Agricultural-Mexican culture to the values of an Industrialized U. S. Culture.”3 This is significant because it shows that this national organization believes that bilingual and bicultural students still needed to conform to U.S. values.

Mary, in her interview, speaks highly of her teachers throughout all her years of grade school education. She really remembers her teachers in a positive light. Her teachers were there for the students even though they had very few resources and even lower pay.

When she entered Trinity University, she remembers being asked in her first math class her exposure to different math topics in high school. Everyone one else in her class, all who were from more affluent districts answered Calculus, Statistics, and other more complicated subject areas. Mary was only allowed to learn up to Pre-Calculus in her high school. In addition, her Pre-Calculus class had been a mixture of cheerleaders, football players, students in the marching band, and others whose extracurricular would take them away often. Many students did not have the confidence to take the course and those who did would be gone regularly. Mary’s high school class was small, and due to all the absences, class would be canceled most days. At times she felt robbed of her education when she looks back.

Mary recalls that the construction of a new Edgewood school that she would attend disrupted her studies. She went to school across the way in the remnants of stores that were used as makeshift classrooms. She and her friends had hope and anticipation for the new school. Due to having to use a temporary school with little room, most days were only three class periods long. Mary remembers the sound of a loud cowbell being flung up and down by her principal. This cowbell should have been around the neck of a grazing cow, but instead it turned into her cue to go on to her next class.

At the same time that construction was underway for what would mark San Antonio as a tourist city, Mary was sitting in her makeshift classroom waiting for the construction on her school to be finished. She explained that most of the good construction workers decided to work at Hemisfair Park, and so the school struggled to find workers to finish building it. Because finding labor was so difficult in San Antonio at the time, the work on the school was rushed. Still, Mary was excited to see how it would turn out. After the construction concluded the faculty asked the students if they would all pick a desk from their temporary school, and take the desk that they had chosen and carry it across the way to their brand-new school. Students of all grades grabbed their desks and slowly together inched their way and their belongings to their brand-new school.

Reflecting on her past years later in this interview, Mary sees the reasoning behind the end result of how her school building turned out. The school was new, but it was noticeably rushed in the construction. Yet, she and her classmates were still excited that they could be out of that makeshift room and into a real classroom. Despite this makeshift education, Mary later graduated from Trinity University. She would go on to receive a Doctorate Degree in her later years. Throughout Mary’s interview, she smiled, cried, and fumed in anger about her life, and yet still, she had found her calling. Working with animals, Mary feels that like her in many instances, they have not had a voice.

2019 is the 50th anniversary of the San Antonio conference, “Bilingual, Bicultural Education. Where Do We Go From Here?” As of 2019, still only 74 percent of Latinos in San Antonio graduate from high school. Only 15 percent of most Hispanics living in San Antonio have received a bachelor’s degree. Since 2018 43 percent of households in San Antonio speak a language other than English. A Washington based group called the “Dual Language Learners National Work Group” has commended San Antonio for their dual-language initiatives. Life stories like Mary’s reflected the need for more sources in education for Mexican-American students before and after the 1968 San Antonio Conference.5 6

Presently San Antonio is working hard to create these resources for Mexican-American children. Yet, there are instances when an imbalance of educational resources is evident. Through Mary’s interview, we can understand bilingualism and the bicultural education of Mexican American student a little bit better and how we as citizens of San Antonio can make a difference.