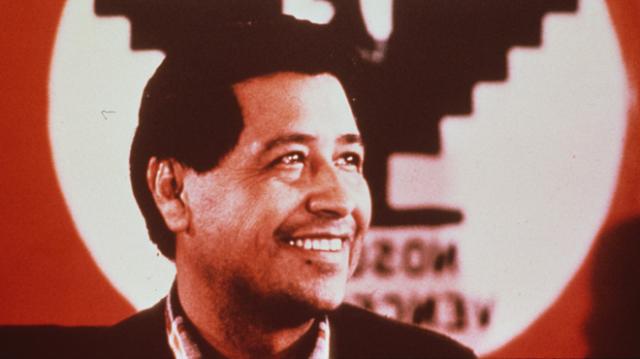 Cesar Chavez is a very famous Mexican-American labor leader. He inspired many agricultural workers to stand up and face problems in the work force. Chavez led a series of peaceful protests and strikes to help migrant workers get higher pay, and started a labor movement. The actions that Cesar Chavez took called for national attention. With his relentless attitude, he led many Mexican-Americans to speak up, and to stand up for themselves and the rights that they deserved.

Cesar Chavez was born on March 31, 1927 in North Gila Valley, Arizona.  At the age of 10, Chavez’s family had lost their family farm and small grocery store due to the chaos of the Great Depression. Without their farm and family-owned grocery store Chavez’s family had no financial income and were forced to join the migrant farm workers.1 When Cesar was fourteen, his father was in an automobile accident that impeded him from working, so Cesar Chavez felt the need to help his family by working in the fields and postponing his high school education for two years.2 Of course the two years became long forgotten because by the age of 17 Cesar Chavez had enlisted in the U.S. Navy. Chavez served in the Navy for two years before being discharged. Chávez described these two years as the worst years of his life.

Neither his mother nor his father wanted him to enlist in the Navy, but he knew he either had to enlist or get drafted. Instead of being drafted into the Army, he enlisted in the U.S. Navy. His work in the Navy consisted of being a deck hand and crew transport. Chavez was never engaged in combat throughout his two years of service. In a seventy-two-hour pass that Chavez and his navy friends received, they returned to Texas and attended a movie theater. Movie theaters were segregated at that time and “it was just accepted by the Mexicans” that they were to sit “in the quarter-section on the right [of the theater].”3 Chavez felt that he should not have to accept such discrimination, so he sat on the left of the theater. A scandal erupted. Chavez was asked to move back to the right of the theater and when he refused, he was sent to jail. Chavez recalls that the sergeant did not know what to charge him with and started to make phone calls to help him figure out what charges to put on Chavez. Chavez could hear the conversations about charging him with “disturbing the peace” and “being drunk.” After about an hour of deliberation with judges, chief of police, and his fellow police officers, the sergeant lectured Chavez and let him go, but not before threatening to put him in jail for life. This was the first time that Chavez had challenged rules discriminating against him due to his race, but it surely would not be the last.4

When his two years of service up, Chavez returned to work in the fields once again and in 1948 he married Helen Fabela.5 It was shortly after this that Cesar created his credit union with Dolores Huerta, a fellow worker at the Community Service Organization (CSO) that continuously encouraged him to organize farmworkers in order to help them. They would loan money out and help people of all ethnicities.

Since hundreds of people would show up to Chavez’s house because of his credit union, many of the anglos in the area started accusing them, Huerta and Chavez, of being communists, trying to bring an end to the union. Policemen would come in and try to disperse those attending, but Chavez knew the law and knew that they would not be able to put the union down.6 Cesar Chavez and all of those associated with him began being called communists. It was all over the newspapers, and back then the newspaper had a lot of influence on the community. Because of this label, people began disassociating themselves with Chavez due to fear.7

About three years after the start of the credit union,  Chavez began his famous strikes, boycotts, and his 25 day fast. Chavez knew he was in for a long ride when he decided to start helping his fellow farm workers. There would be many moments of despair and even more times of joy and excitement.