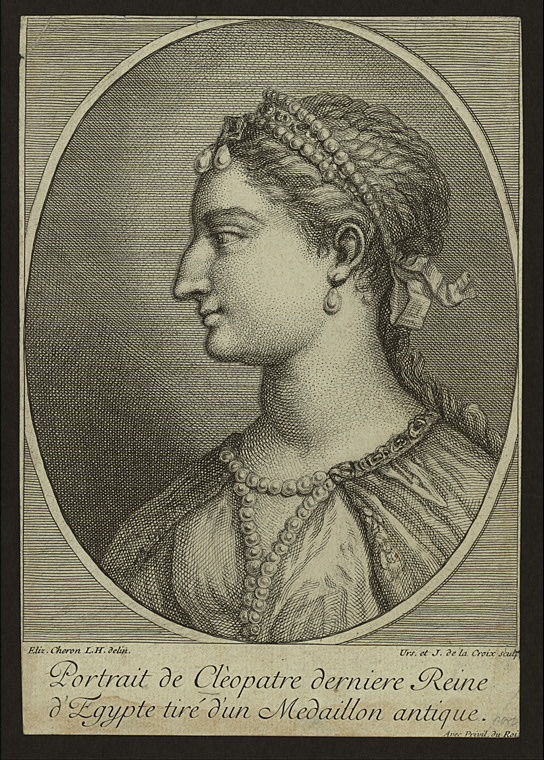 When people hear the name Cleopatra, they often associate this name with a woman whose charms and seduction powers led her to bedazzle two of the most powerful men in Roman history, Julius Caesar, and Mark Antony. But what were her intentions in her entanglements with these two important historical figures? Roman history portrays her as a woman “foolish enough to think that she might one day rule Rome, and devious enough to lure a decent man (Caesar) away from his heart and home.” 1 This depiction, however, does not entirely describe the woman who could control and keep one of the most significant empires in history. Cleopatra’s relationships with Julius Caesar and Mark Antony provided her with resources to reestablish a strong Egyptian empire, which, despite her efforts, would later come to an end with her death. Cleopatra’s portrayal in history has been limited to her relationship with these two Roman generals, and Roman historians have generally given her a bad reputation.2 There has been little emphasis on other aspects of her life, her accomplishments, and her reign as the last queen of the Egyptian empire.

Cleopatra VII was the last monarch of Egypt, and many would think that she was, therefore, Egyptian, but what many may not know is that she was actually Greek. Born in Alexandria, Egypt, Cleopatra was a direct descendant of the Macedonian Ptolemaic dynasty.3 The Ptolemies had ruled Egypt since the death of Alexander the Great in the early fourth century B.C.E. Cleopatra was not only the last monarch of Egypt but also the last Ptolemaic ruler.4 She was also the only Ptolemaic ruler who learned the Egyptian language.5

When Ptolemy XII Auletes (Cleopatra’s father) died in 51 B.C.E., the throne of Egypt was taken by the seventeen-year-old Cleopatra and her brother, the ten-year-old Ptolemy. The two of them then ruled as Cleopatra VII and Ptolemy XIII.6 Brother and sister ruling together did not mean problems would be limited. In fact, a few years after Cleopatra and Ptolemy took the throne of Egypt, Ptolemy started a new dating system, and he also claimed sole rule of Egypt from his father’s death. In the summer of 49 B.C.E., Cleopatra’s name disappeared from all Egyptian official documents, and Ptolemy XIII proclaimed himself as the sole ruler of Egypt, forcing Cleopatra to leave Alexandria.7 This event was what led her to meet Julius Caesar. As a Roman officer, Caesar had the power of intervening in the problems between Cleopatra and her brother. His attempts would have been successful if not for the intervention of Ptolemy’s allies who opposed allowing Cleopatra to rule again. After the known Alexandrian War, Cleopatra was restored by Caesar to the throne of Egypt after the death of her brother Ptolemy XIII in the war.8 These events started Cleopatra’s relationship with Caesar, a romance from which Caesarion, the first son of Cleopatra, was the fruit. Cleopatra’s relationship with Caesar not only gave her back control over Egypt, but it also meant protection from Rome; and for Caesar, it meant an access to Egypt’s wealth.9

Besides the power she gained from her relationship with Caesar, Cleopatra’s marriage with Mark Antony, after Caesar’s death, led her to accomplish the restoring of the Egyptian empire. Mark Antony believed that the greatness of the Roman empire “consisted more in giving than taking.”10 Based on this belief, Antony gave his new wife, Cleopatra, extensions of land stretching from the Mediterranean coast, “from Cilicia, through Syria and Phoenicia, large past of Judaea, Lebanon and the Arab state of Ituraea.”11 Cleopatra’s intentions in restoring Egypt were also manifested by the names she chose for her children. Her first son, Caesarion, was named after Julius Caesar, claiming that her son was indeed the son of this important Roman figure.12 She also had three more children with Mark Antony. Their names also reflected Cleopatra’s ambitions. The twins, Alexander Helios and Cleopatra Selene, were named in honor of her family lineage. Alexander Helios was named after Alexander the Great as the sun god Helios. This character represented the role model of Ptolemy III, who extended the power of the Ptolemaic rulers to its greatest extent. In the same way, the name of Cleopatra Selene was inspired from the goddess Isis, a figure that had represented and ruled most of the region within the Ptolemaic and Seleucid lineage. For this reason, Cleopatra Selene was the most convenient name to manifest Cleopatra’s attempts to unify Egypt and Syria under her control.13 Her last child was named Ptolemy Philadelphus, named after the man who had ruled the territories she obtained when she married with Mark Antony.14

Cleopatra’s relationship with Mark Antony, although it gave her power and control over a large number of territories, also brought the end of her reign and, consequently, the end of the Egyptian empire. When Antony established that Caesarion and his three children with Cleopatra would rule Egypt and the Roman provinces in Asia minor, Octavian, adoptive child of Caesar and Antony’s first wife’s half-brother, declared war on both Antony and Cleopatra. The known Battle of Actium in 31 B.C.E. went badly for Antony, and it started the fall of Egypt and her queen. When Cleopatra realized her defeat was inevitable, she committed suicide in 30 B.C.E., marking the end of the Ptolemaic rule and the fall of Egypt to Roman control.15

Undoubtedly, Cleopatra was very intelligent in relating with both Julius Caesar and Mark Antony, and by consequence obtaining great power and control. She may have recognized that the aid of two of the most important Roman generals could eventually lead her to achieve her ambitions of extending the Egyptian empire.16 However, she never accomplished her intentions. Her ambitions were strongly highlighted by her relationship with the two Roman generals, and these two men provide her with the resources she needed to obtain the establishment of a stronger Egypt. Her determination in achieving what she aimed for is admirable.

Although Roman history has portrayed her as a bad woman dangerous for Rome, as followed by the propaganda of Octavian,17 Cleopatra not only related herself with two of the most important men in Roman history, but she also created a pathway towards the unification of a kingdom. She might have been successful if not for the events that led to the fall of her reign.