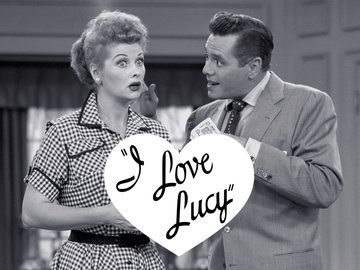 Winner of the Fall 2016 StMU History Media Awards for

Best Use of Multiple Images

“Lucy, you got some splainin’ to do!”  These words were heard by families across America repeatedly in the 1950s. Uttered in a thick Latin accent by none other than Ricky Ricardo, the bongo playing, bandleader, Cuban husband of the flighty, redheaded, Lucy Ricardo on the 1950s television situation comedy, I Love Lucy. This popular television comedy entered the homes of people across America in the years 1951 to 1957. In the six-year span that the show was on the air, it never ranked lower than third nationally among television programs.1 So the question arises: what was it about this show that was so popular among the families in America? The answer to that is simple. I Love Lucy told the tale of a common housewife who dreamed of more than cooking and cleaning; she wanted to be a star. Housewives throughout America related to the character of Lucy Ricardo who longed for more in life, in the period of American history that has been called The Affluent Society.

Lucille Ball was born in Celoron, New York in 1911 to a family who believed that hard work was needed to achieve success. She found work in movies and on the radio, and had a recurring role on the hit CBS radio show, My Favorite Husband.2 Desi Arnaz was born in Santiago de Cuba, Cuba in 1917 to a wealthy family. His father was a politician and landowner and his mother was an heiress. The Revolution of 1932 in Cuba hit the Arnaz family hard, and they were ultimately forced to move to Miami, Florida.3 Arnaz met Ball in 1940. The two immediately connected with one another, and after a five-month whirlwind romance, the couple was married.

However, the marriage was rocky from the start, and it did not help that Ball was forced to stay home due to her acting and radio career, while Arnaz toured with his band. When the director of My Favorite Husband offered Ball the opportunity to take the show to the new medium of television, she jumped at the chance on the one condition that Arnaz be cast for the role of her on-screen husband. Ball was looking for a way to save her marriage, and she believed that working with Arnaz and having him close to home was the way to do it. CBS was hesitant to agree to her request, but they wanted Ball so they decided to film a pilot for the show.4 With her hardworking, no-nonsense family background, Ball was determined to make the show a success. Arnaz and Ball became Lucy and Ricky Ricardo on the immediate hit television show that would run for the next six years.

Family life in the 1950s focused mostly on men working while women stayed home, kept the house, and raised children. Pediatrician Dr. Benjamin Spock published Baby and Child Care, a book that highlighted an approach to raising children that was child-centered as opposed to parent-centered. Dr. Spock viewed the role of the mother as belonging at the center of the household while the husband was the breadwinner and had very little to no interaction in raising children.5 This view began to generate dissatisfaction among women who longed for a more fulfilling life.

I Love Lucy focused on the life of Lucy Ricardo, a ditzy housewife with dreams of fame and fortune, and her Cuban, bandleader husband Ricky. Lucy was far from the typical housewife; she was not satisfied with simply staying home and keeping house while her husband worked or went out with friends. She had quite the imagination and came up with schemes to break into show business, which usually caused tension between her and Ricky. Lucy brought the desires for something more that were locked away in the hearts of housewives across America, and she brought those desires out into the public eye. While she did play her role in an extremely comedic way, she somehow always returned to the dutiful housewife of the 1950s.6

Producers were not sure what the audience would make of Arnaz. He was a television first in many ways; he was the first Hispanic actor welcomed into the homes of the American people on a regular basis. It was the first time many had ever heard a Latino accent, and Arnaz did not fit the typical Hispanic stereotype that most Americans held at that time. Arnaz was handsome, smart, dignified, warm, responsible, employed, loyal, and married. The producers were also concerned about the audience viewing the Ricardo’s marriage as interracial, and this was not something that had ever before been aired openly in movies or on television. Despite these obstacles, Arnaz was treated as an equal white American, and accepted graciously throughout the nation.7

During its six-year reign, I Love Lucy ranked in the top three spots nationally among television programs. Exceptional talent in acting, comedic timing, writing, directing, editing and above all, being relatable, made I Love Lucy an instantaneous success.8 Lucille Ball accepted her role as the zany housewife, Lucy Ricardo, and ran with it. She was not afraid to put herself out there, work hard, and make her dreams come true. Housewives across America finally had a female television star that they were able to relate to; someone who knew there was more to life than cooking and cleaning. With this in mind, maybe, just maybe, they too could stand up and do something more.

Even though “I love Lucy” is a famous show in the 50s, its fame remains until today. The show depicted the life of a typical housewife in the United States starring Lucille Ball, an actress who worked hard to achieve her dream. American housewives could relate to the main character that a stay at home wife is not just about cooking and cleaning and that they also have thoughts and hopes that they want to achieve.

Princess Diana is a famous woman who influenced women during that period. However, her childhood was tragic since her parents were divorced, and all she wanted was a man that would love her. Unfortunately, all she had was an inconsiderate prince that left her in sorrow and sadness. Her husband’s comments on her waist left her nothing but traumatization about her weight, which later on led to her eating disorder.

It’s so interesting to read about the background and popularity of shows that were aired in the 20th century. I can see how the show “I Love Lucy” made Lucille Ball an influential figure during a time where men were considered the breadwinners, while women stayed at home and were the primary caretakers. This was not only a milestone for women to be on television but also for the Hispanic community since Arnaz was the first Hispanic actor in American television. This is a great article!

I have seen I Love Lucy before and it is actually a very good show. Although in the eyes of society today Lucille Ball would have been seen as weak, at the time, she was an inspiration to many women. Not only was she an inspiration because she became a famous actress in real life, but even within the show she humanized housewives. The show showed how housewives were strong women as well and had opinions that were very much valid. Great article.

I love Lucy was an amazing show, I used to watch it all the time with my great grandma. Lucy was kind of weak at times and with today’s society they would probably talk down on her and the show. The point of the show is to be funny yet empowering for woman. This show will forever be popular and if you haven’t watched it you should. Amazing article!

Fantastic article! It’s a Christmas tradition for my grandmother and I to watch I Love Lucy. While reading this article, all I could think about was my grandma as she was a housewife herself. She stayed home taking care of her nine children while my grandfather, a hardworking immigrant worked as a milkman. My grandma mentioned how much she loved the television show and while reading this article, I can see why she loves it so much. Additionally, I appreciate the diversity the television introduced to Americans. Overall, this was a wonderful article!

This article immediately caught my attention because I used to watch I Love Lucy growing up. Lucy definitely did try to define society in always wanting to be more than what a woman’s role was in the 1950’s. I found it particularly interesting how the television network was hesitant to air her husband Ricky Ricardo because he would have been the first Latino to be shown nationally on TV, and in an interracial marriage. Overall, I think it’s great to see that the show was a success and allowed growth for the Hispanic community that lead to more opportunity in future for many other individuals.

This is a very amazing and well done article, Celina. Telling the story of one of the most famous television sitcoms of all time was a genius idea for an article. You really did a good job talking about the show, its impact, and why it is still so well known even today. You did a really good job talking about the show with grace and elegance. Also your images are great, and help people to see how the show was back in the day, Well done, Celina.

I distinctly remember watching I Love Lucy with my grandma growing up. This show was supposed to make females feel empowered and it was very funny to watch. It was very interesting how the producer of the television channel was hesitant to air her husband on television because he was a part of the Hispanic culture. Thank you for writing this article, it made me feel with my grandma again.