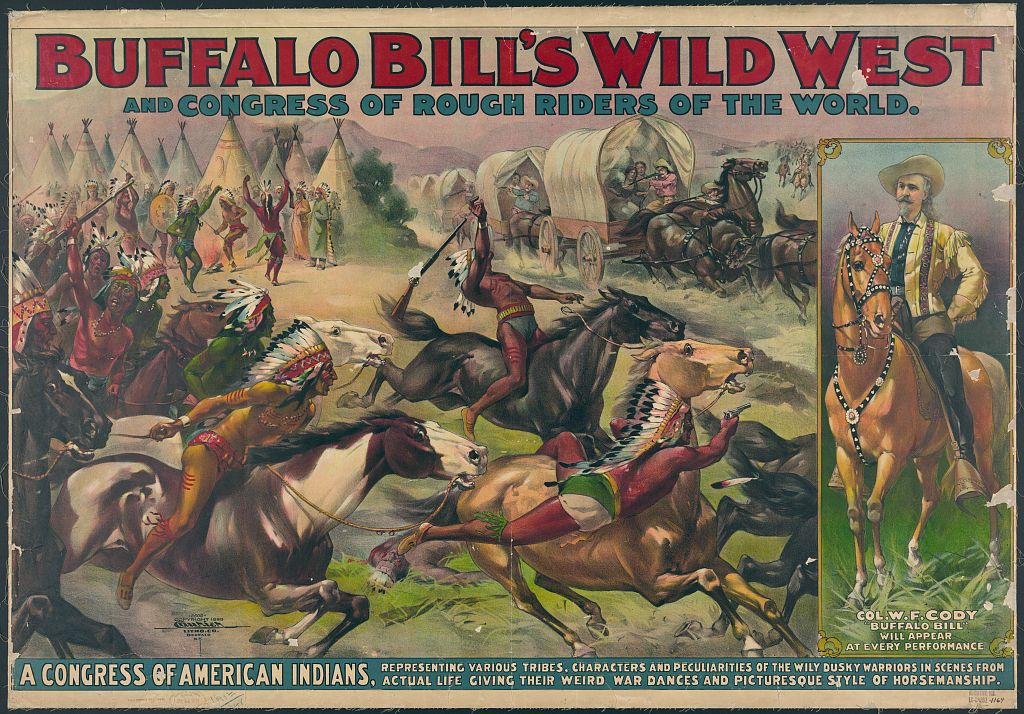 In 1883, William “Buffalo Bill” Cody, famous frontiersman, army scout, and buffalo hunter, opened the doors of his Wild West Show for the first time.1 This show was a fantastical, exaggerated portrayal of life on the frontier, complete with reenactments of famous frontier battles with natives, displays by gifted marksmen (and one woman) and horsemen, and shows of the culture of the various Native Americans in Bill’s employ. This show would capture the hearts and minds of many people in the United States, and later on even in Europe, as Buffalo Bill’s show traveled to many European countries between 1886 and 1906.2

One of the reasons for the success of Buffalo Bill’s show was its “authenticity.” Bill himself was already somewhat of a celebrity in the west, after having earned his moniker “Buffalo Bill” for killing some 4,280 buffalo for the Kansas Pacific Railroad Company in the 1860s.3 Bill also had the good business sense to employ many of the Lakota Sioux and other Native Americans, including the man famous for the role he actually played at the Battle of the Little Big Horn, Chief Sitting Bull. It was in its depiction of Native Americans that many of his fans were drawn, enamored by the elaborate songs and dances of these peoples, with Buffalo Bill going so far as to say, “My Indians are the principal feature of this show.”4 The depiction of the Native Americans in his show was largely of their warrior culture, war regalia, and dances made for going into battle; however, this was taking place during the closing of the American frontier, when the death of the buffalo herds and the end of the Sioux Wars had largely ended this way of life in the west.

After roughly four months working with Cody, Sitting Bull grew tired of the show and left to return to the Standing Rock Reservation, where he would eventually be killed. Later in 1890, the Massacre at Wounded Knee would take place and many Sioux would be killed by the U.S. 7th Cavalry, the same regiment that fought with Custer years prior, at the Battle of the Little Big Horn.5 With this, the way of life that was shown in Buffalo Bill’s show was all but destroyed.

Even with this, Buffalo Bill’s Wild West Show continued to be popular up until it went bankrupt and closed in 1916.6 By 1916, the “Wild West” had not truly existed for quite some time; the country had been rapidly industrializing, and the age of both Cowboys and Indians would soon give way to the machine guns and artillery of the First World War. However, it was not the death of the west that ended Bill’s show, but rather the end of interest in the west. Although people praised Bill’s show for its authenticity, it was not authentic to the contemporary west. The show did not feature miles-long slow rides in freezing temperatures on cattle drives, and it did not show subsistence farming. What Buffalo Bill’s Wild West Show gave its audience was the same thing that they grew accustomed to from dime novels and stories of the west: rough and tumble cowboys, crack shots, skilled horsemen, and the Natives that made the west so dangerous. With the closing of the frontier and the nation looking outside of its borders to expand, the west was no longer as exotic as it once was in the public’s eye, and was anything but wild.