The Day Pompeii was Gone 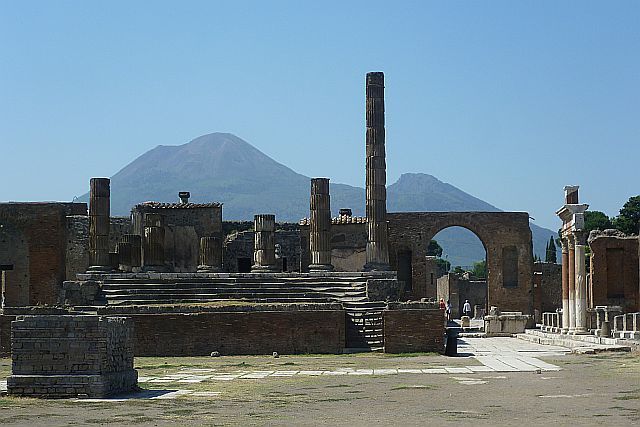 During the First Century, war and illnesses were common killers in the Roman Empire. However, in the year 79 CE, Mount Vesuvius would show the city of Pompeii that a natural disaster could bring as much devastation and destruction as anything else.

In the decades before Mount Vesuvius engulfed Pompeii in ashes, an earthquake had struck the region. While the earthquake did not devastate the region, people there did not comprehend the amount of death and destruction that a natural disaster was capable of. In 79 CE, the beautiful and thriving city of Pompeii in the Roman Empire was a popular location for the wealthy and merchants to flock to. Historians have placed the population of Pompeii and neighboring region between 10,000 and 20,000 people. 1 Unfortunately, in the month of August, the city of Pompeii would be transformed from a jewel to ruins by one of the most powerful and devastating natural forces: a volcanic eruption.

Although nature provided warning signs of the catastrophic event that would soon follow, people were not able to comprehend them. Animals were dying because of their lungs being filled with toxic gas, a strong odor filled the countryside of Pompeii, and worse of all, earthquakes rattled the ground below as a result of the pressure from the magma.

On the morning of August 24, 79 CE, a strong blast from Mount Vesuvius that resulted in smoke arising from the crater drew people’s attention to the volcano, but the people of Pompeii did not panic or evacuate. Worse was yet to come. Around noon, the second explosion took place. This explosion was much stronger. A mushroom cloud shot into the sky at a distance of 27 miles. The explosion was estimated to be 100,000 times stronger than the bomb dropped on Hiroshima.2

The eruption that caused the mushroom cloud was so strong that it could have been witnessed hundreds of miles away. Pliny the Younger, an eyewitness, was so horrified and amazed by the cloud that he could not help but describe it in awe:

A cloud, from which mountain was uncertain, at this distance (but it was found afterwards to come from Mount Vesuvius), was ascending, the appearance of which I cannot give you a more exact description of than by likening it to that of a pine-tree, for it shot up to a great height in the form of a very tall trunk, which spread itself out at the top into a sort of branch.3

For those who decided not to flee Pompeii in the wake of the eruption, death was almost certain. As the eruption lasted a day, every passing hour meant more ash and toxic gas. If somehow people managed to survive breathing the toxic gas, the volcanic ashes were sure to kill them. Since structures in Pompeii were not built to carry as much weight as the ash covering them, many structures collapsed, resulting in the deaths of people who found refuge in them.

By the time Mount Vesuvius stopped ejecting ash and toxic gas into the air, ash covered Pompeii. The entire city of Pompeii was gone. What once was a vibrant city was reduced to a pile of ash. In fact, to this day a third of the city remains in ash. Although Mount Vesuvius has not erupted since 1944, an eruption is imminent; hopefully the destruction of the next eruption will not be as severe as the one in 79 CE.