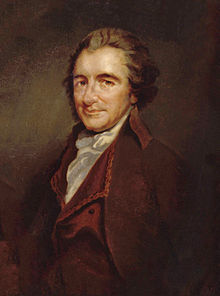 There are moments in history that stand out and are remembered more than others. Moments like these are crucial because they tend to change the lives of many populations throughout our world. How could a pamphlet with a simple message make such a drastic change in the lives of the American population? There was such a pamphlet, and its writer was Thomas Paine, an American immigrant, who strove to make his American dream come true. Paine pursued his career as a writer, and joined the movement for creating a new nation. He immigrated to America in 1774, and shortly thereafter became involved in revolutionary circles in Philadelphia. In early 1776, he published an anonymous pamphlet, titled Common Sense. The pamphlet called for the end of British tyranny in the American colonies and a break with a country ruled by kings. Common Sense made its appearance at a crucial moment as the debate for American independence reached a tipping point.

Americans during this time were changing their minds about fighting the British for a few reasons. Many Americans were still undecided on the question of independence, and these Americans were the audience that Paine targeted in his pamphlet. Paine laid down several reasons for fighting for independence from the Crown. First, the casualties from the war were too large to justify anything less than independence. Second, the Patriots had a lingering affection for England that fell apart when the British began recruiting Indians, slaves, and Hessians, all of which were not Americans. Third, the colonies were closed to all overseas trade due to the British enforcing the Prohibitory Act with a blockade of colonial ports.1 Paine wanted the American people to be free from all these imperfections that he was subjected to endure while living in England. To keep the reader’s attention, he did not bring the idea of independence into the writing until his conclusion. This pamphlet, Common Sense, fought for the idea of independence with logical reasoning and fiery passion. Like its title, the denotation to having common sense is to possess simple and practical reasoning that gives a clear and wise course of action for a situation; this is what Thomas Paine worked to provide. He wrote that wanting independence for the country is not a hard decision to make due to the numerous wrongs that had been done to Americans at the hands of the British.

With the publication of this pamphlet, Paine not only galvanized Americans, but gave them a voice. His pamphlet changed the American outlook on the war. Although Paine denounced the many British injustices in the pamphlet, the English constitution was the issue that he primarily wrote about in Common Sense. This was not enough on its own to bring about the radical thoughts to the people, so he continued to argue that the people ought to blame the King. Paine stated, “it is simple common sense to break away from such a corrupt and brutal government,” which gives support to his claims that the only solution left is that of independence.2 Paine provides multiple reasons in the pamphlet for independence, especially when he writes about the promotion of the best possible government for the people.3

Common Sense contained a total of four sections, taking up the body of the pamphlet. The sections were as follows: On the Origin and Design of the Government in General, with Concise Remarks on the English Constitution; On Heredity and Hereditary Succession; Thoughts on the Present State of American Affairs; and Of the Present solely Ability of America with Some Miscellaneous Reflections. The first of these four sections states that society is a blessing, but the government is a necessary evil. Paine gives an example of this by saying that society can rally together; however, if the rally causes disruption and makes a mess of society, government will undoubtedly behave unjustly. Paine attacks the English government with this and claims it to be bloated. The second section attacks the monarchy itself. Paine attacks the Crown by saying that it came to possess power, and therefore the monarchy was born.4 Paine uses the Bible, specifically the Old Testament, to constitute his argument. He writes of how the old Hebrews were ruled by elders and judges instead of a king. He targets American Protestant followers, providing reasons to view independence in the same light as he.5 The third section that Paine covers is in regards to colonists and the growth of America. He claims that America could have grown the same way it did under the rule of England, without their support. He strongly believed America needed to be divided from England in its entirety. He did not want people to think about the ideas of independence alone, but also to take action in fighting against the tyrannical hand of the British, particularly linking tyranny and monarchy. The final section was his argument for independence. He speaks of freedoms that encompass religion, military, and living. He makes the claim that since America has no debt, the country can afford to create its own army and not rely on the English military.6

Because of the controversy that may be stirred up due to the pamphlet, Paine remained anonymous. In addition, the ability for him to be anonymous made a stronger impact because the ideas and arguments were less personal and more interchangeable within the population of Americans; these individuals were better able to identify and relate to the issues he discussed. He published his work on January 9, 1776, anonymously; the following day in Philadelphia, it appeared for a moment in the genesis of the American Revolution.7

Thomas Paine used what he believed to be his own common sense to construct the message and reality of the British tyranny, and make it stick in the minds of the audience he was addressing. He was a strong writer with beliefs that he had accumulated from his own life experiences. The pamphlet was the best form of writing at the time to reach the majority of the American people due to its low cost and wide availability. He wrote with a style that enabled him to make phrases memorable. Paine’s influence in politics also gave him the status of a great political writer. He gave the people of America the chance to make a change during this time of uncertainty and fear.

I liked the fact that the author included parts from the pamphlet onto the article. They also did very well on explaining why Thomas Paine wrote Common Sense. I also liked the fact that they added a picture of the pamphlet onto the article. In addition, they give us background information of what Common sense contained of. Overall, I found this article to be very interesting.

It starts out by explaining who Thomas Paine is and what he did. He made a pamphlet that changed America. Common Sense was what the pamphlet was called it it gave examples of why the British were oppressing the colonist. This kind of pamphlet was directed toward the people who agreed with that and that was how he was able to get the pamphlet around. The article explains the effects the pamphlet had and what happens during the time of its effects with war and more. All a round the article was good at explaining the problems in the world at the time and how much of an effect did the pamphlet Common Sense had the whole time.

Great work on this article. I feel like it added some background to the Common Sense that I otherwise wouldn’t have know about. I can tell you did some deep and thorough research. I think the image of the Common Sense itself really helped me connect with this piece of history. Seeing it helps me picture the time period more accurately.

This article was written very nicely! I had always heard of Thomas Paine and about how he wrote Common Sense but I never really understand it until this article. One of the things about this article that I really like was how the author broke down the structure of the pamphlet. Also how they thoroughly described the sections of the pamphlet. This helps the reader get a better understanding of what the author is trying to convey.

This was a very well written article! Thomas Paine’s Common Sense is so often mentioned in History classes, but I don’t think it’s ever really been properly explained to me before. I find it especially interesting that he published the pamphlet anonymously and did not point to independence until the end. Perhaps if people did so today, more common ground could be found without the distraction of what side of an issue someone is on. Great article!

Before reading this article, I knew of the name Thomas Pane as well as Common Sense, but I didn’t really understand what in entailed. The author did a great job at covering all the points of the pamphlet, the meaning behind why it was written, and the importance of it to American History. The structure of the article was written very well, and the story kept the reader intrigued until the end.

I had no idea who Thomas Paine really was or what his pamphlet was about. This article opened my eyes as to how a pamphlet can change minds and convince so many people. I believe the author did an awesome job writing about Thomas Paine and “Common Sense”. I found this article very informative and put together in a way where anyone can understand who Paine was. I think articles like this help emphasize how impactful writing can be when it comes to national identity and the want for freedom. I also never thought Paine would publish this anonymously, but I definitely believe it helped in his favor since there was no bias or any information about the author that might alter someone’s view on the topic. Awesome job with this article!

I appreciate this article , I mentioned earlier that I learned about him class so I already had an Idea about his character. This article has some real good information and opened my eyes on how much more he really was for the americans. The fact that he had to remain anonymous so it doest create drama that was not needed ,it  turned out to be better for him so that it wasnt so personal, and I feel for readers or just the audience he was targeting ,that makes a big difference in a good way. Great job on the article! very informative.

This article was very well written. I really liked how the information was very captivating. I never got bored or tired from reading this, I actually felt quite intrigued by the idea that caused Thomas Paine to write common sense. The part that was very astonishing was that when it was published, he made it anonymous. Thank you for making this and being able to understand the topic better for the class.