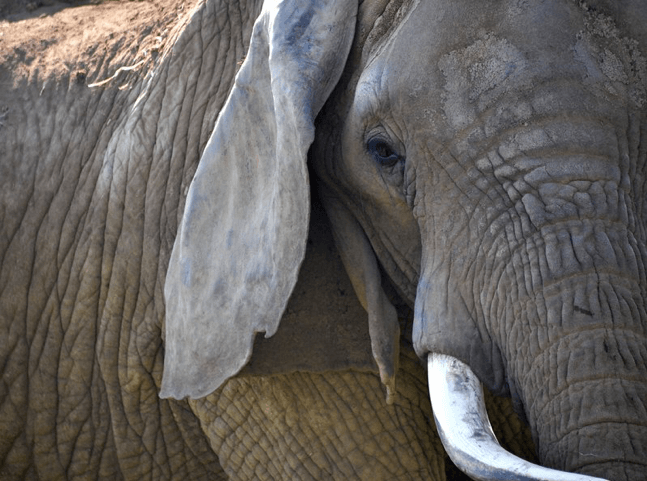 Standing at an average height of 11 ft. and weighing 6 tons, the African elephant is the largest mammal walking the Earth. As they migrate through the African continent, their presence profoundly shapes the ecosystem.1 The animal is vital to the survival of several species varying from trees that rely on elephants to disperse their seeds to the smaller ground animals who drink from the water that accumulates in their giant indented footprints. The African elephant is indisputably beautiful, intelligent and social; but it is in grave danger. Approximately 400,000 individual African elephants are left in the wild, and their existence is constantly and heavily threatened by human activity.2

In 2004, the International Union for Conservation of Nature (IUCN) declared the African Elephant to be vulnerable – meaning that they are at a high risk of becoming extinct or endangered in the near future. According to the IUCN, a species is considered endangered if there is a : “50–70% population decrease over 10 years, a total geographic area less than 5,000 km2 (or local population area less than 500 km2), a population size less than 2,500 adults, a restricted population of 250 adults, or a statistical prediction that it will go extinct within the next 20 years.”3

The elephant is hunted at the rate that it is because of its ivory tusks. The most distinguishable features of an elephant are its elongated incisors which are made of ivory: a hard, white and extremely valuable and durable material. This “white gold” is currently worth a total of $1,500 per pound and is sold primarily as fashion and ornamental items carved into jewelry, art pieces or kept as a trophy and a sign of wealth.4 To collect this ivory, poachers kill elephants and mutilate the animal’s head to extract the tusks from their root in the cranial cavity.5

This ivory trade was banned in 1989 under Appendix 1 of the Convention on International Trade in Endangered Species of Wild Fauna and Flora (CITES) which mentions that the Elephas Maximus and “all parts and derivatives of the species” are to be protected.6 Despite the convention, the ivory trade is very much alive and is decimating the species. Five African countries continue to provide ivory Zimbabwe, Botswana, Mozambique, Malawi and Burundi because herds reside within the states’ boundaries or because they possess stocks of ivory ready to sell to the highest bidder.7

Poachers, who are for the most part locals, rely on the money made from selling tusks to sustain their family. As was the case with John Kaimio a 33-year-old Kenyan man who admitted to killing 70 elephants and was sentenced to prison. Kaimio explained that before entering this business his family would rely on livestock, but the arid climate killed the animals and any resources needed to survive. In his own words Kaimio explained that he went into the business of poaching to meet the needs of his family, “to buy food and pay for my child to go to boarding school. This amount could change things.”8

Despite the widespread structural poverty in these countries, poaching remains a cruel business and organizations around the world fight to put an end to this illicit trade. One of these organizations is The Elephant Information System (ETIS) which tracks down parties of the illegal ivory trade. It has classified countries like China, Kenya, Malawi, Malaysia, Uganda, and Vietnam as being of primary concern because of the vast amounts of ivory that have been seized or because they serve major transit points for ivory.9 China remains the world’s largest consumer of legal and illegal ivory that is used for medicine, ornaments, and all kinds of carvings. It is estimated that 50% to 70% of poached ivory ends up in China despite there being a ban in place since 1990.10

In 2017, China announced they would begin a new and heavily enforced total ban on domestic ivory with the purpose to “improve elephant conservation and combat illegal ivory trade…”11 Since December 30, 2017, China banned not only the processing  of ivory, but also the sale of it. Additionally, ivory carvers and anyone who relied on the ivory business to survive, have been encouraged to work in museums or abandon their skills altogether.

Other countries involved in the ivory trade include Belgium, Austria, the Czech Republic and the United States, which is the second largest ivory consumer in the world.12 In 2017, President Trump lifted the ban on importing elephant heads from Zimbabwe and Zambia into the United States. The justification for lifting the ban is that managing the population of elephants in these African countries will benefit the survival of other species in the wild.13 As explained by the CEO of the Humane Society, Wayne Pallace, lifting this ban delivers a message to the rest of the world that by allowing rich Americans to collect trophies, the United States is dismissing the international community’s efforts to ensure the survival of the elephant risking their becoming endangered.14.

Other countries, however, are doing all that they can to protect the species. In 2016, the Kenyan government set on fire 105 tons of ivory- the remains of 6,500 poached elephants, to convey to the world that they are fervently opposed to the ivory trade. In the words of President Kenyatta, “For us, ivory is worthless unless it is in our elephants.”15 In the past 27 years countries like the United States, China, the Philippines and many others have burned their ivory stockpiles, but none has ever been as huge or as significant. This action of solidarity with the elephant in Kenya is classified as the largest burning of ivory in world history and is important to mention because Kenya is an underdeveloped country that struggles with poverty and droughts. President Kenyatta explained that the worth of their stockpile – which is roughly $150 million dollars – could aid the development of the country significantly, but prefers to burn the tusks due to the immorality of poaching.16

Governments, however, are not the only entities capable and willing to help the African elephant. More than 50 international organizations dedicate their efforts to ensure the survival of the African Elephant. Some of which include: the Nature Conservancy, Save the Elephants, Global Sanctuary for Elephants, Friends of the Elephant and many others. Much can be done to help at the individual level as well by joining protests for the banishment of the ivory trade. An example of this occurred in 2014, where thousands marched in 136 cities ranging from Washington, D.C. to Paris, to Nairobi, Kenya to pressure government officials in these countries to ban poaching and to toughen the laws that allow for it to take place.17 The cruel and unnecessary poaching of elephants will halt when the demand for the material ceases and alternative means of survival can be pursued for former poachers to support their families. The ivory trade will bring about the extinction of the African elephant, unless altered. The situation for the African elephant will improve once all people become educated of the ruthlessness behind this business, and governments all around the world become willing to join the conservation efforts to save the elephants. As humans it is our duty to prevent such intrinsically beautiful and important species from disappearing from the face of the Earth.