He Would Have Killed Me: The Story of Jennifer Teege, Granddaughter of Nazi commandant Amon Goeth 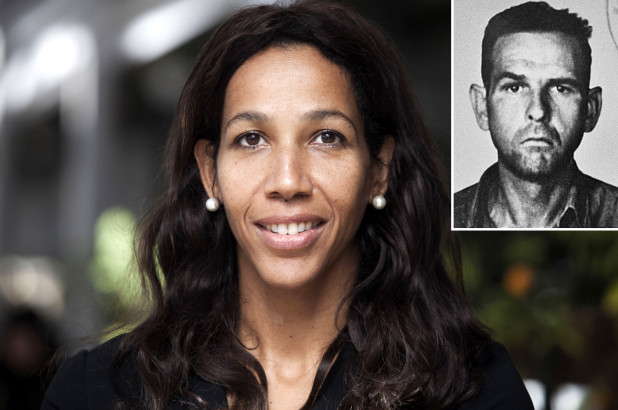 “I am dreaming: I am swimming in a dark lake, the water as thick as tar. Suddenly corpses appear all around me: spindly figures, skeletons almost, that have had everything humane taken from them.”1

From an outside perspective, her life appeared perfect. Not the slightest of struggles seemed to bother her. She traveled, had a successful career, and a wonderful family. However, her life was quite the opposite. Jennifer Teege struggled with her inner demons; she appeared as a light to the world, but her mind seemed to be victimized by a mysterious sadness and a feeling that she did not know the root cause of, yet always knew that a protruding emotion was seizing her. Nonetheless, finding out the reason behind one’s sadness can be hard when one doesn’t even know why one feels that way. But what if one day you made a connection to this emotion unexpectedly, maybe at a library? This was the case for Jennifer Teege, who found out the harrowing secret of her biological grandfather Amon Goeth. Goeth was a Nazi commander responsible for the torture and mass killing of innocent Jews in Poland. He was a killer who wouldn’t have hesitated to kill his own granddaughter Jennifer if she would have ever been in his presence. This was a hidden secret that she discovered by curiosity, but it led her to the truth of who she descended from, and to the realization that she shares a cold-hearted killer’s blood. Will she let this new truth change her outlook on life or will she persevere through her new findings?

On June 29, 1970, Jennifer was born in the city of Munich, Germany. Her mother Monika was twenty-five when she had a short fling with a Nigerian student. Their short affair resulted in Monika becoming pregnant with Jennifer. Jennifer’s mother battled with depression. Therefore, it was hard for her to maintain a job and provide for her daughter. So when Jennifer was four-weeks old, Monika left her at Salberg House, which was a Catholic home for infants. During her time at Salberg, Jennifer’s mother would often visit her and occasionally take Jennifer to visit her grandmother Ruth. At three years old, Jennifer was put into a foster home; four years later, at age seven, Jennifer was adopted by her foster parents, Inge and Gerhard Sieber.2 Growing up, Jennifer found great interest in learning about the Holocaust. She read book after book about the Nazi regime. She was intrigued on why the commanders of concentration camps would commit such horrific acts. During her high school years, Jennifer read Anne Franks Diary of a Young Girl. She described seeing the world through Anne’s eyes: “I felt her fear but also her optimism and her hope.”3

Teege then went on to attend Tel Aviv University in Israel, where she earned a degree in Middle Eastern and African studies. During her time in Israel, Jennifer also learned to speak Hebrew.4 She additionally befriended many Holocaust survivors where she worked at the Goethe Institute. Many of these individuals wanted to hear and learn German, while others just enjoyed being read German material.5 Although Jennifer enjoyed spending quality time with survivors, and made a friend in each one, she returned back to Germany after a suicide bomber exploded a bomb on her bus in Tel Aviv. Jennifer could have become a statistic on that day. “All I know is that I found myself walking through Tel Aviv on my own. No longer happy and outgoing, but sad and introverted. I felt no joy and no curiosity. It was as if a wall had appeared between me and my surroundings.”6 Realizing that she could lose her life in a place that was away from her loved ones, she fell back into a state of depression. Once again she was living with a burden of sadness. She described her sadness as feeling locked away inside a house with numerous doors, and not knowing what was behind those doors.7 However, those doors would soon be opened and a hidden secret would be uncovered. Jennifer Teege was about to make a brutal discovery that would soon portray an important part in her life.

“It was a moment that cut her life in two. There was the ‘before’ when she knew nothing of her family’s sinister past, and ‘after’ when she was forced to live with the truth.”8

When Jennifer was thirty-eight, on a warm August day she was at the Central Library in Hamburg looking for something on depression. As she was browsing through the shelves, Jennifer noticed a red book titled, I Have to Love my Father, Don’t I? by Matthias Kessler. Intrigued by the name and color of the book, she removed it from the shelf. On the cover was a middle aged woman named Monika Goeth. The woman was her mother. Jennifer was holding a book about her own mother.9 As she browsed through the pages, she began to realize that the monster her mother was writing about was her grandfather, who had been the infamous Nazi commander responsible for the killing of thousands of Jews in Poland. This monster was Amon Goeth. Unable to think or breathe properly, she checked out the book and waited outside the library for her husband Goetz to pick her up. For the next couple of weeks Jennifer tried to learn everything about her grandfather. She needed to know who he was and why he became a monster. As time passed her dreadful discovery made her become distant from her family; daily tasks as simple as brushing her teeth and showering were overbearing and hard to do. It felt like she was living a horrible nightmare and it wouldn’t end. At a young age, Jennifer would examine her dark skin, frizzy hair, and lanky stature in the mirror, and she saw how it differentiated her from her adoptive family. Now she looks at the lines between her nose and eyes and sees that they resemble those of her grandfather’s. “A thought flashes across my mind: I must do something about the lines, must have them botoxed, lasered, lifted!”10

What Jennifer Teege found out about her grandfather was startling. He was born Amon Leopold Goeth in Vienna, Austria. His parents decided to send him to a Catholic boarding school at a very young age. However, he eventually left the school against his parent’s wishes. At a young age Amon would play sadistic jokes and was captivated by right wing ideologies and movements. By 1931, he had converted to Nazism, the National Socialist German Workers’ Party. He then became a member of the SS security force, in which Amon’s reputation rapidly moved him towards a higher status. He soon left Vienna for Poland. By 1942 he was in charge of setting up a labor camp in Lublin, Poland. In Lublin, Amon worked for Odilo Globocnik, who was a part of the SS force. Odilo was responsible for the killing of countless Jews. Globocnik then gave Amon the responsibility of liquidating the Jews. “Liquidation meant rounding up the able ghetto population into forced labor; those too weak or too ill to work were shot, including children and the elderly.” During two days in March of 1943, Amon “ordered the clearance of the Krakow ghetto. Around 2,000 people are killed during these two days; a further 4,000 are deported, many to Auschwitz.” Amon Goeth was a man who enjoyed the thrill of killing: “in this world of men, killing was a contest, a kind of sport…It reached the point where killing a human being meant nothing more than swatting a fly…In the end the mind goes completely numb; death has entertainment values.”11 On September 13, 1946, Amon was hanged. His last words were “Heil Hitler.”12 In 1993, Steven Spielberg’s film Schindler’s List showcased Amon Goeth’s psychotic personality and the atrocities that many Jews had to endure. The film also displays the horror that happened in the camps. Although the film is gruesome, it does not fully depict the true monster that Amon was capable of being. He was a man who had beautiful features yet was a cold-hearted killer.

To try to comprehend her grandfather’s doings, she visited a variety of therapists. Psychoanalysist Peter Briendl described Jennifer’s story exceptionally: “First given up for adoption and then the discovery of her family’s history…it is heartbreaking…even her conception was a provocation.”13 Over time, she visited her mother’s home in Hasenbergl, Munich; her grandparents’ villa in Krakow; the Auschwitz concentration camp. Earlier in her life, Jennifer had never believed in fate; only in chance. However, she now believes in fate. “Some things in life are predetermined.” Her fate led her to become interested in Holocaust history, led her to Israel, to befriend Holocaust survivors, and most importantly, fate led her to the psychology section in the Hamburg library, and to her mother’s book. Through all of it, Jennifer wants to hold on to her past life because that is what will get her through her new profound truth. Amon Goeth executed a combination of around 10,000 Jews in the Krakow–Plaszow concentration camp; Amon was known as the Butcher of Plaszow, a monster, a killer. Jennifer will not let herself become another of Amon Goeth’s victims; Jennifer is her name and she is a daughter, a mother, and friend.