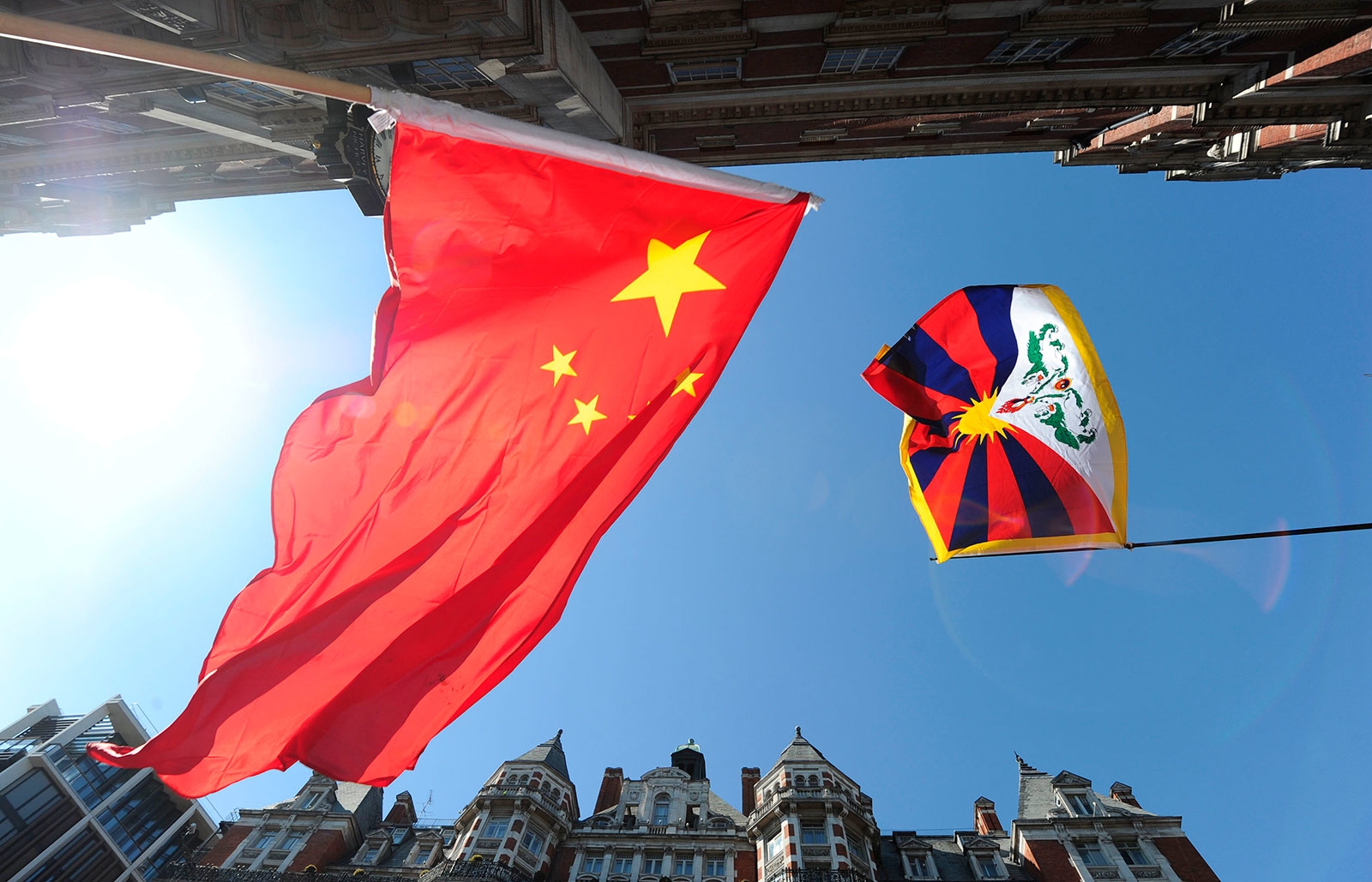 Imagine at the age of twenty-three having to walk at night across the Himalayan mountains, to survive and avoid imprisonment, torture, and certain death. This is the only choice the 14th Dalai Lama, Tenzin Gyatso, could make to avoid being imprisoned and most likely killed by the Chinese military.1 This set him on a perilous journey that required him to travel by night, dressed as a soldier, for two weeks and across the tallest and most lethal mountain range, the Himalayas. 2 This was his only option because the fate of his people and their ancient culture depended on his survival.3

Tibet is nestled between the Southwestern border of China, and the Northeastern border of Nepal. Prior to China’s invasion of Tibet in 1950, Tibetan society was governed by a caste system centered around the Buddhist principle of reincarnation, the religion for a country ran as a Theocracy.4 Buddhist reincarnation suggests that if an individual lived a virtuous life, following his or her death, he or she reincarnates into the next highest caste and enjoys said caste’s privileges as the reward of a deeply humble and virtuous life. The one who served as a symbol of unity for the people and who ruled the country by maintaining Tibetan traditions in combining the duties of the spiritual leader and political leader of Tibet is the Dalai Lama.5 The Dalai Lama is not representative of any one school of Buddhist thought, instead he advocates traditional Buddhist values and the preservation of Tibetan traditions.

During the near two-hundred-year rule of China’s Qing Dynasty (1720- 1912), the Dalai Lama was the head of Tibet’s government, with the government enjoying almost complete sovereignty at times. Following the collapse of the Qing Dynasty, in 1914 a convention was held in which British India, China, and Tibet agreed to make Tibet semi-autonomous. 6 Under the agreement China, which never had full control over Tibet, handled Tibet’s foreign relations while Tibet handled its internal affairs and maintained an army. However, thirty-five years later, the plan to rob Tibetans of their autonomy and rights was set in motion.

In 1949, Mao Zedong established China as a communist state known as the People’s Republic of China. A mere two months later Mao ordered the “liberation” of Tibet from its Buddhist leaders.7 The Chinese government painted the Dalai Lama as the architect of a regressive and feudal regime, and promoted themselves as a heroic force of change. 8 Mao believed that Tibet only enjoyed autonomy due to the machinations of foreign influences. He cited Chinese traditions that claimed Tibetans were one of the five races that made up China as evidence that Tibet’s rightful place was as a province of China.9 In 1950, the Chinese military invaded Tibet and defeated its army. Instead of occupying the country, the Chinese government invited Tibetan officials to negotiate an agreement between the two. At the meeting, the Tibetan representatives signed a Seventeen-Point Agreement, acknowledging China’s sovereignty over Tibet.10 The Tibetan government refuted this agreement’s legitimacy, claiming that the delegation sent was not authorized to sign any such documents, nor were they allowed to communicate back home the nature of their situation. It was this combination of Tibet’s military defeat and forced signing of the agreement that set the stage for Mao’s occupation of Tibet and the erosion of Tibet’s freedom and rights.

In 1951, China began exerting its newly affirmed control over Tibet by sending troops into the country and implementing communist reforms. The first reform implemented was the settling Tibetans who were typically a nomadic people and the settlement of more Chinese citizens to the region. The second reform instituted was land redistribution, crops were confiscated by the Chinese government and given to a central authority with only a small amount returned to Tibetans. However, land redistribution was not implemented uniformly across Tibet, reforms were inexplicably delayed in western Tibet, and society largely continued unchanged. Eastern Tibet on the other hand rebelled in 1956, with monasteries and noblemen leading the resistance against Chinese Communists. Guerilla fighters were successful in capturing control of Southern Tibet, however this uprising was costly. The Tibetan uprising of 1959 alone costing anywhere from 85,000 to 87,000 lives, and the response by China resulted in 10,000 to 15,000 Tibetans dying over the course of three days. Fearing the capture of the Dalai Lama, Tibetan citizens surrounded his residence in an effort to protect him.11 Tibetans chose to stand against the Chinese troops outraged by the previous nine years of egregious human rights violations that included many soldiers raping and murdering Buddhist nuns and monks who resisted the reforms.

With this opportunity to escape provided to him by his people the Dalai Lama began is harrowing thirteen-day trek on foot through the Himalayas to India. Upon arriving in India, representatives sent by Prime Minister Nehru welcomed him and the refugees that had followed hoping to escape the atrocities currently being inflicted upon their homeland. The Dalai Lama worked alongside his people who fled to establish the Tibetan government in exile in Dharamshala, Himachal Pradesh, India.

During his time as both the head of the exiled government and after having stepped down from said position the Dalai Lama has worked furiously advocating not just the rights of Tibetans, but people all across the globe.12 The Dalai Lama has spoken on a variety of social issues ranging from the environment, to economics, reproductive health, sexuality, interfaith dialogue, women’s rights, and nonviolence. “Furthermore, everyone appreciates affection and at the same time has the potential for showing affection to others. With this in mind, I have found that friendship and understanding can develop.”13 All while being unable to return to his home of Tibet and not knowing how his subsequent reincarnation was to be found. His existence challenges the Chinese government’s blatant disregard for human rights, which include massacres, tortures, killings, bombardment of monasteries, extermination of nomad camps, and violating at least sixteen articles of the Universal Declaration of Human Rights. Now 81 years old, he may be the last Dalai Lama. The Dalai Lama is traditionally found following his reincarnation by the Panchen Lama, someone who is akin to our U.S. Vice President. Along with the numerous human rights violations committed the Chinese government also arrested both the Panchen Lama and his family, then named their own Panchen Lama in 1995, thereby creating uncertainty as to whether the next reincarnation would follow Tibet’s traditions or serve the Chinese government’s interests.14 To dispel this fog of doubt and concern, the Dalai Lama announced a plan to determine the future of his reincarnation, upon him turning ninety, the Dalai Lama will convene with a trust to decide if it is necessary for a 15th Dalai Lama to be recognized. If it is determined that his reincarnation is necessary, then the Gaden Phodrang Trust will search for and recognize the 15th Dalai Lama, along with the caveat that any person chosen by the Chinese government is to be dismissed by all people.15

Despite attacks on his home, his religion, and himself, the Dalai Lama persists in refusing to call for violence against China. For over fifty years this man, now in the twilight of his life, has spread his message of peace and understanding to the world hoping he could help country and his people one day see the restoration of their basic human rights following years of blatant abuse and maltreatment.16

His Holiness the 14th Dalai Lama