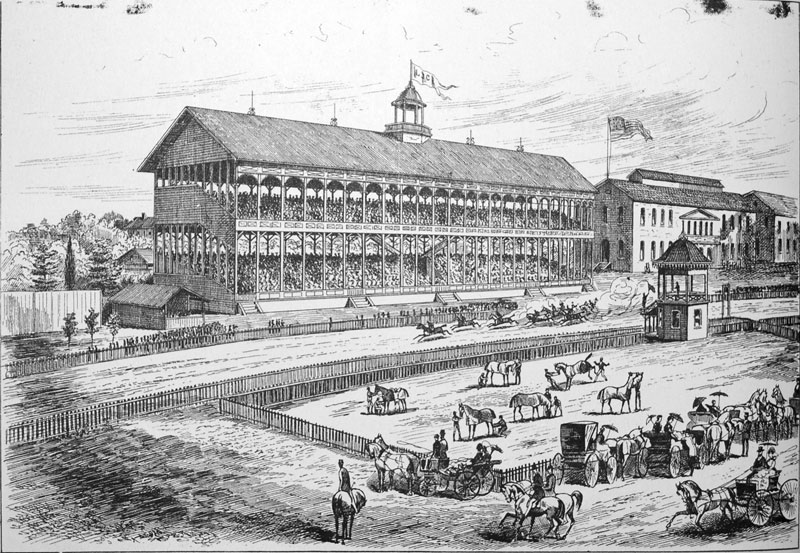 Horse racing in North America began almost as soon as Europeans settled the colonies. The first racetrack, called the New Market, was established in 1665 near the site of the present-day garden city of Long Island in New York. Tracks rapidly developed wide appeal among the citizens, and horse racing spread along the Atlantic Coast quickly.1 By the time of the American Revolution, horse racing had already become popular in almost every colony. Moreover, it was moving well into the newly settled areas of the Southwest. Andrew Jackson was a founder of the first racing track in Nashville, Tennessee, in the early nineteenth century. By the 1800s, Kentucky had eight racetracks, due to its native bluegrass being recognized as ideal for grazing horses.2

Horse racing becomes much more important when we analyze life in early American society. Like almost everything else in the life of early America, the world of horse racing was separated by strong lines of class and race.3 For many years, it was considered the exclusive enjoyment for the rich gentleman. In 1674, a court in Virginia gave a fine to James Bullock, a tailor, who proposed a race. It was against the law for a laborer to make a race, and according to the court, horse racing was a sport exclusive to only rich gentlemen. While aristocrats retained control of racing, they were not the only people who participated. Southern aristocrats often trained young male slaves as jockeys for their horses, and northern horse owners employed the services of free blacks as riders. In America, African Americans eventually emerged as some of the most talented and experienced trainers of racing horses. Horse racing became very popular among the public. Despite social and legal pressures, free blacks and poor whites often staged their own informal races.4

Racing also reflected the growing sectional rivalry between the North and the South. In 1824, the Union Race Course on Long Island established an astounding $24,000 prize for a race between two famous thoroughbreds: American Eclipse from the North, and Sir Henry from the South. Surprisingly, the race between Eclipse and Sir Henry was America’s first national event.5 Eclipse won two of the three heats, but Sir Henry prevailed in another such celebrated contest in 1836. These intersectional races, which drew enormous crowds and created tremendous publicity, continued into the 1850s, until the North-South rivalry began to take a deadly turn.6

Horse racing remained popular after the Civil War, but two major developments changed its character considerably. The first development  was the successful effort to drive African-Americans out of the sport. At least until in the 1890s, black jockeys and trainers remained central to racing. At the first Kentucky Derby, in 1875, fourteen of the fifteen horses had African American jockeys. Isaac Murphy, a black man, won a remarkable 44 percent of all races, including three Kentucky Derbies. Gradually, however, the same social dynamics that enforced racial segregation in so many other areas of American life penetrated to horse racing as well. By the beginning of the twentieth century, white jockeys and organized jockey clubs had driven almost all black riders and many black trainers out of the sport.7

The second change was the introduction of formalized betting in the sport. In the late nineteenth century, racetracks began creating betting systems to lure customers to the races.  Race horses were moving into the hands of enormously wealthy families, and the audience for racing was becoming increasingly working class and lower middle class. The people who now came to tracks were mostly white men, and some white women, who were lured to the races not by the love of horses, but by the usually futile hope of quick and easy riches through gambling.8

As soon as the horse racing ideology was offered to the American society, the public showed great affection. Horse racing has become known as one of the most popular sports in America. Over time its development exposed the changes American society has gone through. Horse racing is still popular in America today, so popular in fact that a three famous races, the Kentucky Derby, the Preakness Stakes, and the Belmont Stakes, known together as the Triple Crown, are still held every May and June.

Its really cool to see how much the sport has evolved from when it first started to where it is now. Even though horse racing is a simple sport in is cool to see how it changed. It was also really interesting to see how far back the sport actually began. I also found it interesting the part about when betting was first introduced. That is what I was most familiar with about horse racing and how people would bet on the horses.

Horse racing, I find it interesting to have know that it was a president who had brought among the sport despite the fact that it was brought up to be a sport limited to the rich class. It is a message that illuminates the idea that horse racing had been around since 1665 and been a popular sport and is a sport that still exist today and remains popular is a notable one.

The history of horse racing is surprising. I was unaware that it was established in North America until 1665 nor that Andrew Jackson was the founder of the first racetrack in Nashville, Tennessee. It’s interesting yet bitter to read that rich American aristocrats used slaves as jockeys since history also shows that slaves were also used as chariot racers during the Republic of Rome. The evolution of horse racing has come a long way and continues to hold a place in American society. Great article!

This article is really interesting. I didn’t know that horse racing existed since the 17th century, and that it was brought by Europeans as a mode of entertainment. What surprised me, given my knowledge about the lower middle class immigrant majority during those years in America, is that the sport quickly polarized towards the richest quintile. The most interesting is the betting system that was created in the 19th century to attract more viewers, turning the majority of the audience from medium to low income population.

I can’t believe how old horse racing is and that it exists today and I would imagine horse racing in its early days to only be for wealthy individuals I mean maintaining horses is costly Gambling on horses is probably what became the greatest motive for wealthy people to get into this sport. What was most surprising was how Isaac Murphy, a black man, got into this sport and won many races and the sport began to evolve with the changes in society.

I never knew much about horse racing, particularly because I never really agreed on it or see the fun in it, but it is still interesting to hear about its origins and how it has evolved. It is interesting to hear that Andrew Jackson was the founder of the first racetrack in Nashville, Tennessee, especially because he was the “common man” president and horse racing was aimed towards the rich.

Horse racing is very popular, and in the summer when i visited it a small town on the outskirts of Madrid they took us on a little tour to one of the biggest stadiums. Reading this article was great, its amazing to see how much the sport has evolved over time. It was also interesting to read how it was first a “rich” people thing. Great story. Very good job!

What an interesting article to read, and how horse racing was becoming more and more popular in America. It came to no surprise that for many years, it was considered the exclusive enjoyment for the rich gentleman; however, what caught my attention the most was the role that African-Americans played in the history of horse racing in America. I enjoyed reading it, and it helped me have a much clearer idea of how horse riding came to be.

This was a very fun article. I did not know about the extensive history of horse racing in the U.S. and how horse racing was something that represented social status and wealth. I enjoyed reading this article and kept me hooked the entire time. This was such an interesting topic to learn about, especially considering that we ourselves have horse races here in San Antonio!

I never knew there was such a deep history with horse racing in the U.S. This was such a good well informed article and it is crazy that the court gave a fine out to someone just for not being rich enough for the sport. I also did not know how horse racing played a role in racism where they tried to slowly push all African-Americans out of being jockeys even when Issac Murphy had a 44% win percentage.