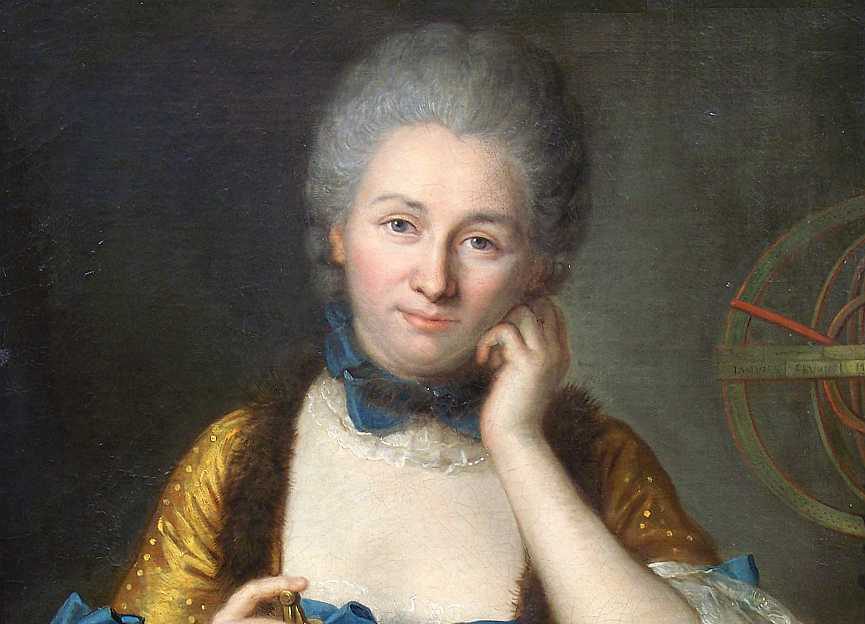 In the early Eighteenth Century, intellectual themes were not part of women’s duties, and it was frowned upon for women to research and question. That is why it is so extraordinary that Émilie du Châtelet, a French woman, became a mathematician and scientist. Voltaire told the king of Prussia, Frederick the Great, in a letter that Châtelet was “a great man whose only fault was being a woman.”1

In 1706, when Émilie du Châtelet was born, French society had restraints on women that men did not face, such as not having real access to education. In Early Modern France, “the state would control the fathers, the fathers would control the families.”2 However, the Enlightenment Era did bring about enough change in France so that it was possible for Châtelet to become educated and advance in her career.3 She was lucky in the fact that she had an “unusually enlightened” father who gave Châtelet such a good education. She was educated in Latin, Italian, English, Spanish, Greek, Mathematics, Astronomy, Geography, and Poetry. Her mother also encouraged her and reflected a “cultivated background.”4

Châtelet changed and influenced society through her work on mathematics and scientific works. She published an introduction to Newtonian mechanics in 1740, and she even translated Newton’s Principia into French, with comments explaining the difficult mathematics to a popular audience.5 This was significant because not only could more of the population now read the works of Newton, but because of her commentary, more of the population could now understand it. It also introduced Newton into mainstream French scientific life. She went into detail on Newton’s theory of Gravity and she recast many of Newton’s theories and results in the “more powerful and suggestive notation of…. Calculus.”6 This had a great effect on the other scientists and mathematicians of the time. Châtelet’s work helped others to understand the complicated Newtonian system. By exploring Newton’s theses, and writing them for the educated public to read, Châtelet changed France.

Châtelet was married in June 1725 to Florent-Claude, marquis du Châtelet and count of Lomont. However, after only three years with her, he left to pursue a military career and rarely visited her. This is when Châtelet began an affair with Voltaire, another lover of Math and Science.7 In order to get her works published, Châtelet had to have Voltaire co-author them with her, but only his name appeared on the front cover. Emily Grosholz writes that Voltaire had not mastered the mathematics from the Principia, but instead relied on Châtelet to “write the technical sections of the book” he was writing called Elements of Newton’s Philosophy.8 Châtelet also discussed research on the solar system, electricity, and magnetism. She had just finished her translation of the Principia, when she died of “childbirth fever,” from a scandalous pregnancy with Voltaire.9

In her unusual career, Émilie du Châtelet worked with other famed scholars and succeeded in making mathematics a language that many more people could understand. As a woman, she opened the doors for other women to follow in her footsteps and she changed the world with her concepts and understandings of these men’s topics.

This was a great read about women and their role in the math and science field. Emilie de Chatelet was an inspiration to women. She did not o bide by the norms of men only being able to be educated properly. She brought great ideas to the table and simplified work so that it was accessible to more people.I though it was great that she knew so many languages that is amazing. Lastly it was great that she empowered women, we need more women encouraging and standing behind other women today in this age.

This is the first time I read about Emilie du Chatelet and her incredible contribution to the world of mathematics. It is incredible how in the past centuries such an important legacy was devalued simply by being a woman. However, Chatelet went ahead and developed a better interpretation of Newton’s works among other great interpretations of the mathematical world, leaving a legacy to all the women of her time.

What an impressive resume! The article gave a great introduction to Émilie du Châtelet, her accomplishments, and the struggles that she faced as a woman. I think most might have been discouraged because the recognition was not immediate. However, this was not her focus, she continued to share ideas and helped educated the public at large. The article even gave us some personal drama which helps understand how vulnerable that she might have been.

Emilie du Chatelet made a significant contribution to the field of French education at a time where educating women was considered foolish. She made this significant contribution by making an even larger one, advancing the spread of Newtonian mathematics. The factors that played into this event in history was the advanced education given to her by her family and the notable absence of her husband.

Emilie Chatelet is a very remarkable and accomplished woman. It is amazing what she has done for science and math. It is very frustrating reading about how women were not viewed as important and they did not even receive a proper education. The fact that she was able to learn so many languages and her parents pushed her to get a better education is surprising in this time. What struck me was how Voltaire would still rely on her work.

Émilie du Châtelet is an inspiring and hardworking French woman. Although the fathers controlled the families in early Modern France, it’s moving to read that her father was willing to provide her with an education. It’s fascinating that she was educated in Latin, Spanish, Greek, Mathematics, Astronomy, etc. Her publication to Newtonian mechanics in 1740 and her translations proved to society that a woman was capable of being just as suitable. She had a tragic death, but her legacy and contribution to mathematics and science will always live.

I had never heard of Émilie du Châtelet or her amazing impact on mathematics, this article allowed me to appreciate Émilie du Châtelet, by telling the story of her importance and how she was forgotten with time. It is annoying to see how important and impactful historical figures are simply forgotten because they are not males, she was especially impactful because she brought math to the common man which before was something that was not easy to follow.

It was definitely uncommon for a woman to study math and science in the 1700’s I think that Chatelets work was an inspiration for women to go to school. I think it was a shock to learn that she began to have an affair with Volitare, but kinda saw it coming which it benifited her in some way. Chatelet was definitely underappreciated since I just learned about her, but she studied and dedicated her life’s work to science. I agree that Chatelet opened new doors for women to step out of their comforts in society and go to school.

The only thing I have to say is, “OH MY GOD.” I love love love European history and I would even go as far as to say that I have a fascination with french history, but I’d never heard of Émilie du Châtelet. She’s an amazing woman from what I’ve read in this article. (My morals force me to exclude her adultery with Voltaire though…) I think it’s amazing whenever a woman does anything that she’s deemed as being incapable of doing just because society deems her as being good for nothing else than childbirth, but I value them, even more, when they succeed as something “only suitable for men.” I loved Voltaire too and he’s always been one of my favorites, so has been a piece of his work “The Henriade.” But I never knew that he had an affair. When I think about it though, it TOTALLY makes sense that he would have an affair with a woman like Émilie du Châtelet. A woman of passion and of smarts and talent. Even though I frown upon adultery I do not blame Châtelet so much because even though I’d love to believe that it was love that fueled her, I love the idea of it being her “using her resources” even more. Power to the women. This has been my favorite article from stmu media history thus far. What a marvelous job the author has done by writing this article.

Mathematics is a wonderful subject that should be accessible to all. I find it extraordinary that Châtelet was able to beat the odds and have a wonderful career in mathematics. One of my biggest complaints when it comes to doing research on older mathematicians is the lack of diversity. I love learning about mathematicians of all manors and it continues to support my belief that anyone can be a mathematician. Châtelet did a very important thing with translating Principia as it allowed French mathematicians to understand Newton’s work. It is quite infuriating to hear that Châtelet could not publish her own work and goes to show that we have to fight against inequality in almost any aspect of our lives.