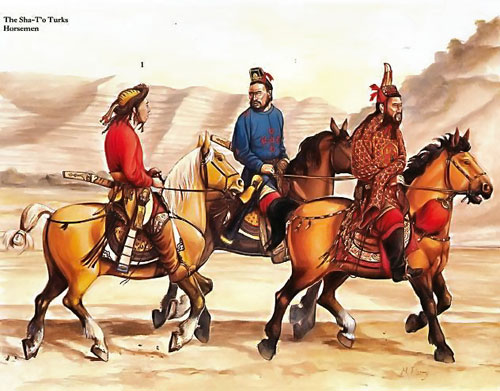 Eurasian nomads, recognized for their ability to survive outside centralized civilizations, were able to survive the arid lands of Central Asia by adapting to their ecological surroundings. Unfortunately for them, Central Asia does not receive enough rain to support large-scale agriculture. As a result, with only miles of grasses and shrubs, these steppe lands lack large rivers or ponds of water that might support irrigation systems.

Their nomadic way of life depended on grazing animals that thrived on the grasslands and shrubs of these Central Asian steppes. They would take advantage of these grasslands to herd sheep, horses, cattle, goats, and camels. Nomadic people would drive their herds from one location to another in search of greener pastures. They were keenly aware of their migratory cycle. They took into account the seasons and the local climate, and they lived mostly off their animals: meat, milk, and the hides or fleece of their flocks. In fact, they used animal bones for tools and animal dung as fuel. Clothing and shoes would be made out of wool and skins. No matter what animal it was, there was always a use. Their hides, materials, and even alcoholic beverages all came from the herd of animals.1

Lacking a settled lifestyle, they developed a culture very different from urban societies. The climate was very harsh and with the lifestyle of the nomads, life was rough. As a result, they relied on opportunities to trade with settled people. Much of this trade was on a small scale due to the immediate needs of the nomadic people. However, because of their recognition of the land, they were able to create long-distance trade networks. The mobility and familiarity with large regions of Central Asia were skills that greatly benefited these nomads. These nomads organized and directed caravans across Central Asia linking the settled societies of China with those of the Mediterranean basin.2

Nomadic society was comprised of two social classes: the elites and commoners. Only the strong, charismatic leaders of the group would be recognized as elites. Once at that level, they would organize social clans and tribes. However, elites normally did little governing. The clans typically controlled their own affairs and resented any interference whatsoever. But when it was time for war, the elites took no remorse and put absolute authority over the forces within their alliances.3

Ultimately, this nomadic ‘nobility’ was a flexible social system. Leaders were able to pass elite status along to their heirs, as long as they acted appropriately. If not, they would be stripped from their position and cut short from any leadership role inside the clan. Meanwhile, commoners had the opportunity to become elites. If they exemplified good conduct by being courageous at warfare, they would have the opportunity to become an elite leader.4

As they expanded, nomadic people were able to create enormous military power due to their outstanding cavalry forces. They had superior equestrian skills, with deadly bow and arrow accuracy, capable of taking down anything that comes their way. They coordinated superb movements to outmaneuver their opponents. In fact, few armies were capable of resisting the mobility and discipline of well-organized nomadic warriors. With such military power, several groups of nomadic societies began to conquer the wealth of settled societies and build imperial states in the surrounding areas of Central Asia.5

No matter the setbacks, the Eurasian nomads were capable of surviving harsh conditions, limited water supply, and just about everything that came their way. At the end, they were able to establish successful trading opportunities with settled societies and gain valuable resources, while becoming one of the most feared and successful warriors in Central Asia due to their unmatched skills and mobility.

Great article! I learned about Eurasian people migrating in class. However, I did not know a lot of information about them. I found it interesting how leaders could pass elite status to their heirs, but they had to act accordingly to keep the title. Its also impressive how common people are given the opportunity to become elites, it’s within their power to raise in status.

I did not know much about the Eurasian Warriors but found this article to be very interesting. The social classes that existed in a small numbers such as nomads is incredible. The way they were able to survive in small and large numbers was very interesting. I think that this article was well written and told a great story. Great job!

Great article it was very informative, I remember learning about these people in high school. But this gave me the opportunity to dig deeper, I really enjoyed it. I wish there was more of a narrative arc it felt very superficial at times and I definitely would have wanted to a more personal story to learn about these people, but very good research.

These Eurasian nomads do show that they were able to adapt to any hard conditions that were in front of them. I am astonished on how these people had a use for every part of the animal. Another part that makes them stand out would be their military. They were nomads that were skilled in the bow and had a large number of cavalry units, which makes them an opponent not to be reckoned with. I felt like the Eurasian nomadic culture was perfectly summarized into this article, I was even able to get a sense of their lifestyle.

Interesting article! I had never really heard about this topic until now but after reading this article I now want to learn more. I found it really interesting how the elite could pass their titles to their heirs but only if they acted accordingly. This seems like a good way to keep their children in line so they don’t mess up. I also thought it was interesting how common people were allowed to rise to power if they were able. Overall this was a interesting article to read and I found the information provided to be very informative.

This is an interesting article! I did not know much about the Eurasian warriors, and how they adapted to harsh conditions. But it seems as though they were able to adapt with no problem. I found it interesting how they uses animals for almost everything, they used their resources pretty well. But I did like idea that commoners had the opportunity to become an elite, and elites were allowed to get stripped from their power.

This is an extremely interesting article. I have to be honest and blunt: I am not a huge fan of Eastern history, mainly because of my ignorance of the topic, but having read more articles about it, I have been more open to enjoy it. I like the topic of the Eastern warriors and find it interesting about their background. The lives of these Eastern warriors are far more different than the standard Western chivalrous knights. This was an outstanding article and was well-written.

What an interesting article. I enjoyed reading the lifestyle of the Nomads. It was great reading that they were able to use their animals for almost any use. I wonder what others uses they would use the animals. By being able to live off animals is amazing. It is also interesting that they understood the climate and how it changed. I wish I could spend a day with them to see how difficult they were working everyday to try to stay alive.

After everyone was pushing to live in a society while they stayed in one place and built around it, these people stayed nomads. It was fascinating to read about the societies they formed outside of the normal civilization. It is not surprising that the strong ruled in these nomadic societies, and that they only had two social classes elites and commoners.