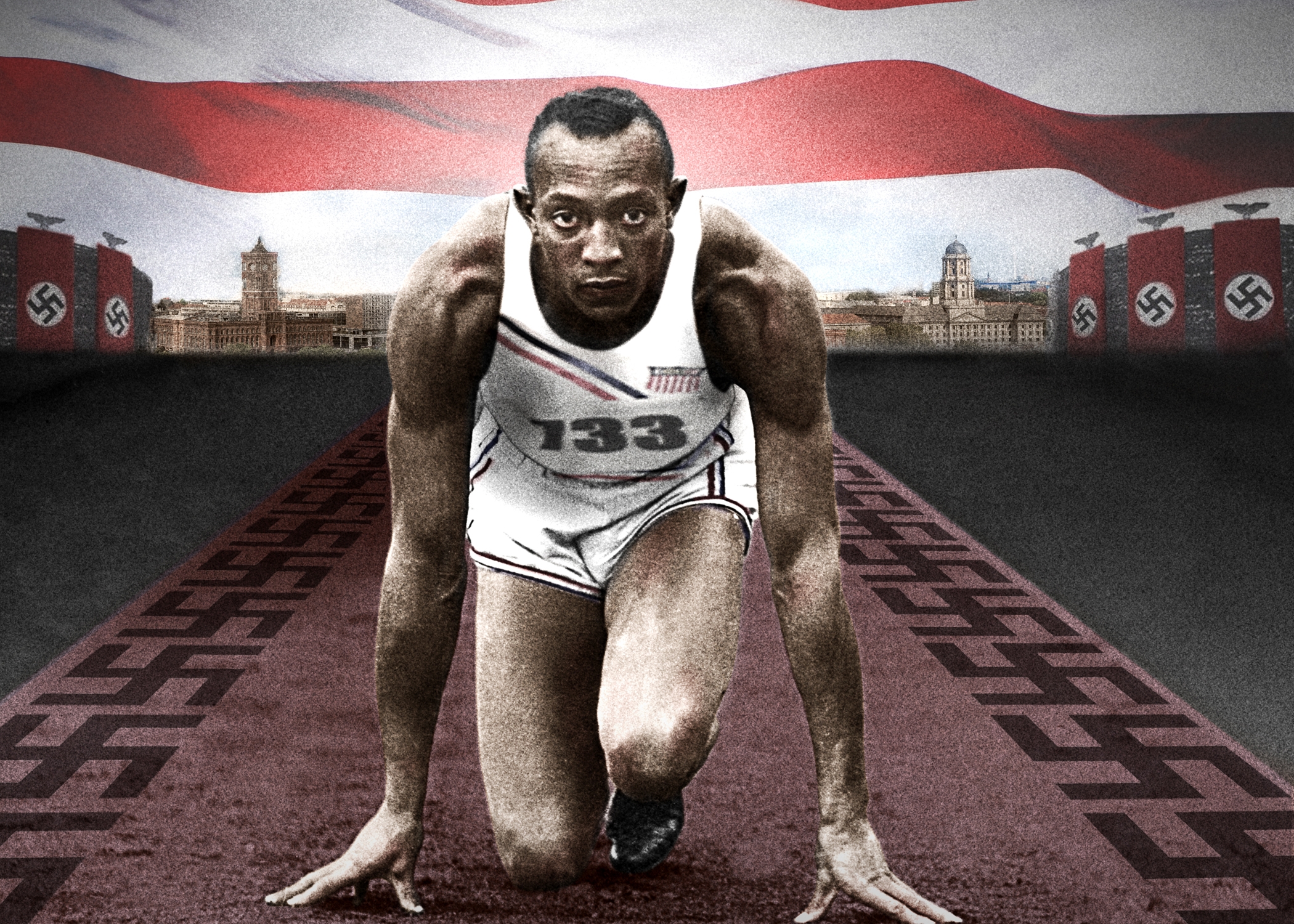 On January 30, 1933, Adolf Hitler was appointed Chancellor of Germany. Hitler quickly turned Germany’s fragile Weimar democracy into a one-party dictatorship. During his rule, Hitler pursued a plan to harass one half-million German Jews to leave Germany. Hitler promoted a “master race” scheme that sought to keep the so-called Aryan race pure from racial contamination from all other races he deemed to be inferior. This Aryan race consisted of only Germanic peoples who had the characteristics of blond hair, blue eyes, and light colored skin. Three years after taking power, Hitler hosted the 1936 Olympics in the German capital of Berlin. This was his opportunity to put his “New Germany” on display for all the world to see.

As Hitler’s Nazi government prepared for these Olympics, athletes from the United States were also preparing themselves for the coming competition in Berlin. In the United States, African Americans were dealing with their own problems of racism. Not only was life hard as an African American in the 1930s, but life was even harder as an African American athlete. One African American, who would later become one of the most famous athletes in the history of Track and Field, was James Cleveland “Jesse” Owens. At the age of eight, he had moved to Cleveland, Ohio with his family, who had sought for better work and educational opportunities. “On his first day of school, he introduced himself as ‘J. C.,’ but his teacher misunderstood him to say “Jesse.” The young Owens bashfully accepted the mistake, thus taking on the name by which he would become famous.”1 Jesse Owens would grow up loving to run. He was the fastest runner in his school and loved competing against others. His dream was to attend the University of Michigan, but there were no scholarships offered in those days and his parents could not afford tuition. Instead, he attended Ohio State University, where he worked for the boosters to pay for his expenses.

In the Summer of 1936, at the Olympic trials, Jesse finished first in all three of the events that he competed in. He had trained hard in the preceding months, and the hard training paid off, allowing Owens to attend the Olympics of 1936, known as “The Nazi Games” or as “Hitler’s Games.” In actuality, these Olympic games were not originally intended to be games hosted by the Nazis:  the “Nazis were never invited to host the Games—and probably never would have applied to do so. Instead, the International Olympic Committee (IOC) had awarded the Olympics to Germany’s Weimar Republic in 1931 before the Nazi takeover as a way of welcoming Germany back to sports respectability.”2

Ironically, Adolf Hitler knew nothing about sports and expressed little interest in hosting the Olympics; instead he wished to host an all-German athletic celebration. “But Dr. Josef Goebbels, the influential minister of propaganda, glimpsed how Germany might score a tremendous public-relations coup and convinced Hitler to support both the Winter and Summer Games.”3 Influenced by Dr. Josef Goebbels, Hitler used these Olympic games as a political relation with other countries.

Several weeks after the Olympic trials, Jesse Owens competed in the Berlin Olympics and made a name for himself. He won four gold medals, in the 100m, 200m, 4x100m relays, and in the long jump. Jesse Owens had set records and represented America in a humble and most respectable way, considering the circumstances. Even though many have claimed that Adolf Hitler refused to congratulate Jesse Owens, others go further by claiming that Hitler actually “snubbed” Owens:

By the end of that fabulous week in Berlin, an attractive yarn attached itself to the name of Jesse Owens. Supposedly, he was ‘snubbed’ by Adolf Hitler, who reportedly refused to congratulate him publicly after his victories. Actually, the story was concocted by American sportswriters, who were all too willing to read the worst of motives into Hitler’s behavior and to assume innocent excellence from America’s newest hero. Although it had no basis in fact, the story of ‘Hitler’s snub’ was repeated so often that people took it as truth. It remains one of the great anecdotes of American popular culture.4

Racism was as alive in the United States as it was overseas in Germany in the 1930s. German Jews were a persecuted minority in the 1930s, and African Americans were experiencing similar treatments of racism in 1930s America. “World reaction to Hitler’s program resulted in a movement to boycott Nazi goods and services, which included a movement to take away the 1936 Olympics from Berlin in an attempt to force the German government to cease its discriminatory practice against the Jews.”5 It was not until the United States entered World War II that sentiment against racism began to penetrate the American social consciousness. Even though Owens continued to face white racism in his own country subsequent to his Olympic victories, he later reflected on his experiences of racism: “What I’ve done is no more than countless other Negros (and Jews, Poles, Greeks and just Americans in general) have done…. I’ve been a Negro in America for fifty-seven years, and I want to tell you that [being black in America] can be pure hell at times and can shake anyone’s sureness. Often it’s worse if you were the world’s fastest human.”6 When Owens returned to the United States after the Olympics, President Franklin Delano Roosevelt refused to acknowledge his accomplishments or even invite him into the White House. It was not until 1979 that President Jimmy Carter presented Jesse Owens with the Living Legend Award. Forty-three years after his Olympic victories, Jesse Owens had finally been properly recognized for his great achievements.

Despite all the controversy that Jesse Owens encountered while doing what he loved, he is a true representation of perseverance and determination. Jesse Owens passed away in March of 1980 from lung cancer.