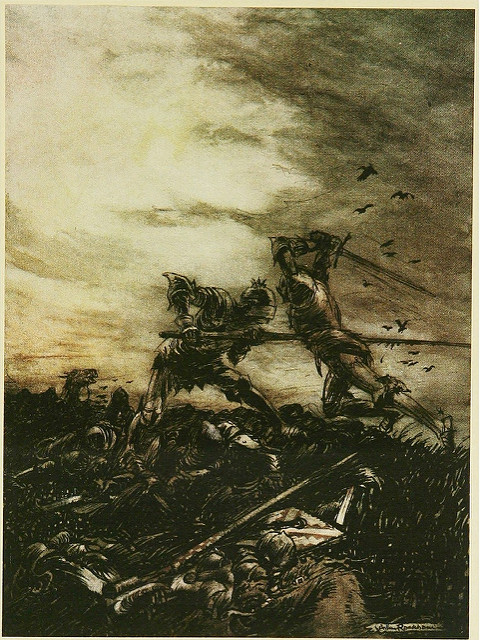 Have you ever heard of the famous holy sword of legend, Excalibur? And do you know who wielded such a weapon? Who was the one to pull the sword from the stone? Only he would be deemed worthy of the crown to become Britain’s king. This man was the famous, legendary King Arthur. If you have never heard of Arthur Pendragon, I hope that I can give you a quick gist of his character, particularly the legend of King Arthur and the Battle of Camlann.

King Arthur is the legendary ruler over Britain and was considered a hero by his people. He is famously known for defending Britain from the invasion of the Anglo-Saxons in the sixth century. Early accounts of Arthur describe him as a warrior for Britain and a very successful one at that.1 Mordred, who in Arthur’s legend is Arthur’s son, was deemed a traitor by his own people for rebelling against his own father. This was the prelude to the famous Battle of Camlann.

King Arthur is signified as having strong Celtic values and chivalry. There is debate as to whether Arthur is a historical figure at all, and whether legends credited to him are true, but there is evidence of a famous “Arthur” in history. The earliest mentions of Arthur date back to the seventh century.2 Arthur was described primarily as a king of war, and as time went on, his legendary activity was popularized.3 Arthur is also known for his famous Knights of the Round Table, for his relationship with Sir Lancelot, and for his holy sword, Excalibur. In the Arthurian legend, Arthur’s son Mordred is also his nephew. Arthur conceived Mordred without knowledge of his incest, and this sin furthermore brings him trouble.4

Arthur’s son Mordred was conceived due to Arthur’s incest with his half-sister Morgause. Arthur did not seem to know that Morgause was his half-sister. When Mordred became a young adult, he became one of Arthur’s knights of the Round Table and aspired to be like his father in the sense that he would someday assume the throne. In order to be one of those knights, one had to be recognized as someone with incredible skill, leadership, honor, and chivalry. Mordred eventually got a small taste of what it would be like to take his father’s place. Arthur left the kingdom and his queen, Guinevere, in Mordred’s hands when he departed for Rome. Unfortunately, during this time Mordred decided to betray his father, assume the throne, and marry Guinevere.5 Because of this, Mordred is partly to blame for the downfall of Arthur’s reign and of Camelot.6 Arthur, when he heard of these events, came back to Camelot to take back what was rightfully his. What ensued was… the Battle of Camlann.

The Battle of Camlann is believed to be the historical Battle of Mount Badon, thought to have taken place in the late fifth or early sixth century. This is where Arthur is said to have fought his last battle against the Anglo-Saxons. In the mythos, the Battle of Camlann accounts for the fight between Arthur and his son Mordred. It is believed that because of Mordred’s treason, he himself joined the Anglo-Saxons to fight against his father and take over Camelot. He supposedly promised them land in the instance that they would defeat Arthur, his knights, and his army.7 Arthur pushed Mordred’s forces back, but at the expense of losing some very important knights. Mordred then tried to hide from his father’s wrath. Arthur pursued Mordred to the river Camlann, where both armies inevitably collide. Arthur and Mordred fought to the death, and in the end Arthur thrust a spear straight through Mordred as he lunged at him. With his dying breath, Mordred fatally wounded Arthur, which eventually caused his death as well.