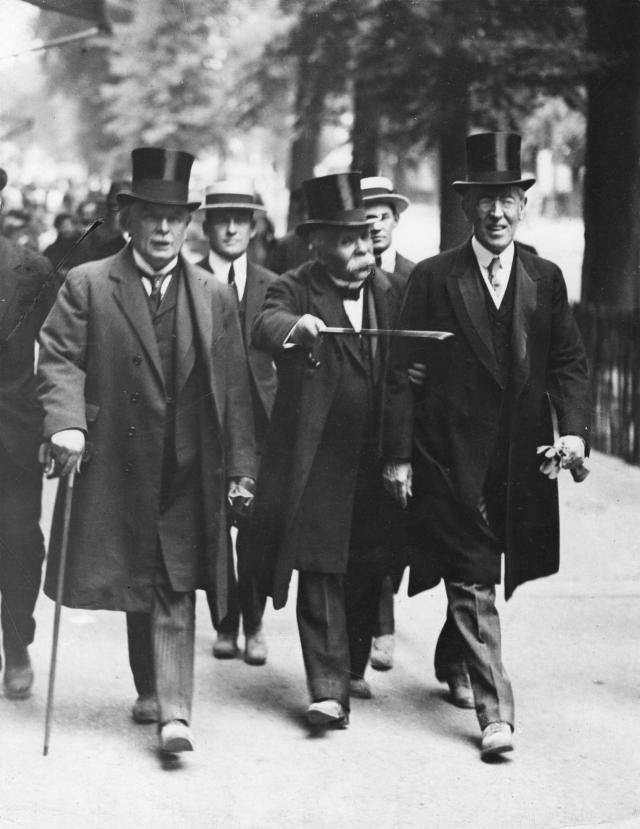 Catastrophic war is something most people loathe and fear, and World War I brought exactly that, with over 38 million causalities, including approximately 17-20 million dead. There were many efforts to end the war, and various strategies to crush each side’s enemies. However, few at the time looked past just ending the war, let alone actually creating stable, sustainable peace. Woodrow Wilson was not one of those people. Wilson enumerated a plan for peace after the war in something titled Fourteen Points, which he gave as an address to the US Congress on January 8, 1918.1

To talk about the Fourteen Points, we must first discuss Wilson himself. Ranked among scholars as one of the nation’s best Presidents, Wilson was a Democrat and served as President through all of World War I and then some. He won the first term of his Presidency to some extent with a progressive plan called the New Freedom, in which he planned to eliminate industrial and financial monopolies, and he promised to reduce taxes on foreign imports. As the war began in Europe in 1914, Wilson was originally against U.S. involvement, but eventually he came to support the Allied Powers of Great Britain, France, and Russia because of German resumption of unrestricted submarine warfare.2 All of this suggests that Wilson understood the importance of being behind what the American people believed, but also strong enough to lead the nation using his own judgment, and not be a push-over. This is exactly what he did with his Fourteen Points, and the effects of it were astounding, and is a prominent reason for why he is regarded as one of the nation’s best Presidents.

The Fourteen Points served as a plan to create world-wide peace following the end of the Great War. Wilson argued for the world to be “made fit and safe to live in.” It would be “the programme of the world’s peace” as outlined in his Fourteen Points. Points 1-5 depicted Wilson’s vision of a world in which each country was independent and allowed to pursue its own goals safe from the aggression of others. The reason Wilson wanted this to happen was because, according to him, the European nations had caused this conflict because of their imperialist designs that had caused them to take their competition into their colonies and onto the high seas. Clashes in the colonies had caused them to engage in an arms race and to enter into secret alliances that committed each nation to wage war even when it was not in their national interests to do so.3 Wilson hoped to stop the chain reaction of events, like those from the summer of 1914, from occurring again by stating that countries should tend to their own matters, and that there should be no limitations on any country’s navigation of the seas or their pursuit of commerce, which was the upshot of “open covenants of peace, openly arrived at” and “absolute freedom of navigation upon the seas.” Point 4, the reduction of armaments, was especially significant for Wilson because of the link between massive build up for war and the compelling sense to use those armaments, even for minor conflicts. Wilson believed that all nations’ armaments should be reduced “to the lowest point consistent with domestic safety.”3

Points 6-13 focused on individual nations and what would happen to them, with the startling claim that their true success would be measured by “the acid test of their good will” on how Russia would be treated. Wilson felt that each nation should move its troops back to its original borders, and that the collapsing nations should be helped.3 This idea was in contrast to what the European allies wanted after the war. They felt the need to continue their military occupation of German territory, partly out of fear that the German’s would resume the war, and partly because they too were so broken by the war that they needed to claim German reparations by force if necessary. This caused significant problems in creating the ensuing peace treaties, particularly the Treaty of Versailles.6

The last of the Fourteen Points was the most important to Wilson, and had the greatest promise for him. In his fourteenth point, Wilson called for the creation of “a general association of nations” or a League of Nations, which would be an alliance of all the world powers, created with the intent of stopping future global wars and regional conflicts, and instead would create the conditions for sustained peace. Although the idea of such a League predated Wilson, Wilson was the strongest advocate for it in 1918. It is possible that without him, or without his Fourteen Points, the League of Nations might have never have formed.7

The legacy of Wilson’s Fourteen Points are the League of Nations’ creation, the facilitating of various treaties that brought World War I to an end, and a basis for how world-wide peace should be handled by attempting to reduce weapons and limit imperialism. However, the League of Nations ultimately broke down with Japan and Germany leaving the League in the 1930s, and collapsing completely with the onset of World War II. Wilson’s main goal of his Fourteen Points was to create this League of Nations that would usher in worldwide peace. Wilson received a stroke in 1919, due partly because of his heartbreak that his own Congress refused to ratify and join his League of Nations. Other elements of his Fourteen Points were also abandoned or ignored by Great Britain and France, particularly his desire to see the world decolonized. In other words, his ideas about world peace were at best too early for a world not ready for the kind of peace and cooperation that he envisioned. Also, when we analyze the speech that Wilson gave to Congress, we see that Wilson believed in the idea that peoples of the world should be allowed to determine their own destinies, something that later became known as the self-determination of peoples. Because this principle was inconsistently followed by the Allies, enabling the Czechs and the Poles to form their own nations but not the Germans with the Austrians to form their own nation, this inconsistency contributed in a large part to the chain-reaction that led to the National-Socialist party forming and coming to power in Germany and its subsequent ambitions to right the wrongs of the Treaty of Versailles. It also created a tension between the idealism of Wilson and the real-world aspirations of the British and French allies to maintain their empires.1