The Race of the Human Race 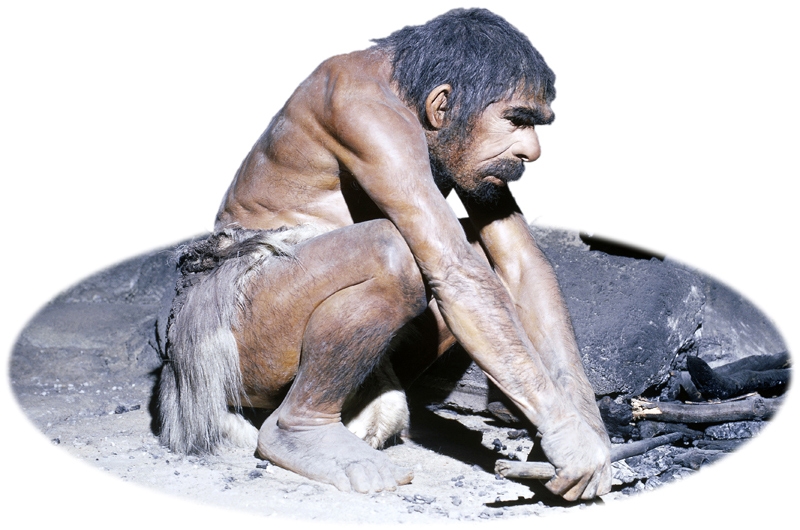 The human species that today makes astounding advances in technology, and particularly in the medical field, did not exist four million years ago. In fact, hominids of that period were very different from the modern species in many ways. How did humans evolve to become today’s humans? How did Homo sapiens become so innovative? For one, they developed favorable qualities that were essential for adaptation and a thriving existence.

Homo sapiens derived from a form of early humans called Neanderthal. Unlike modern humans, characteristics of the Neanderthal included occipital buns and protruded brow ridges.1 One important facial feature of the Neanderthal was their large nose for “humidifying and warming cold, dry air” before it reached the lungs.2 Modern humans do not have this characteristic due to the fact that the Neanderthals lived in much harsher conditions. Thanks to the work of archaeologists and anthropologists, we know a great deal about the life and world of Neanderthals. The first fossils of these humans were found in France, and scholars have since called these humans Cro-Magnon. They created innovative tools from bones and antlers for hunting. This enabled them to survive and thrive in their environment. They even created artwork “in the form of decorated tools, beads, ivory carvings of humans and animals, clay figurines, musical instruments, and cave paintings.”3

Homo sapiens originated from East Africa. From there homo sapiens have migrated to all of earth’s main land masses. By taking advantage of land bridges, they have spread to Indonesia, New Guinea, Australia, and the Americas. Another contributing factor to the spreading of humans was the recent major Ice Age. The freezing of the oceans’ waters around the polar caps lowered the sea level, which exposed land bridges between land masses that were otherwise under water. For example, the connection between Calabria and Sicily had a sea level around -126 meters.4 They were able to adapt to the different environments due to their larger brain capacities, hence more intelligence. Having the knowledge that they had, they were able to create warm clothes and shelters to survive under various harsh conditions in the regions they occupied. Since they were nomadic people, there was no economic prosperity during the Paleolithic era. This was due to the fact that they never inhabited an area for a long duration of time.  They were foragers; they scrapped up whatever they could find for survival, so there was no time period in which they could accumulate wealth. With that being said, that meant that there were no social classes. Instead, they lived an egalitarian lifestyle. While the men hunted, the women gathered. This method sustained their existence until the Neolithic Revolution, which domesticated both plants and animals.

The evolution of earlier hominids to Homo sapiens opened the door to a species capable of more advanced thinking about their surroundings and survival. The human race has since continued to thrive to the present. Without their innovative tools, body structures, and eventually domestication of plants and animals, Homo sapiens would not have been able to produce the advancements in technology and sciences that we have available today.