From Hunter-Gatherers to Civilization: What Was Lost in Transition? 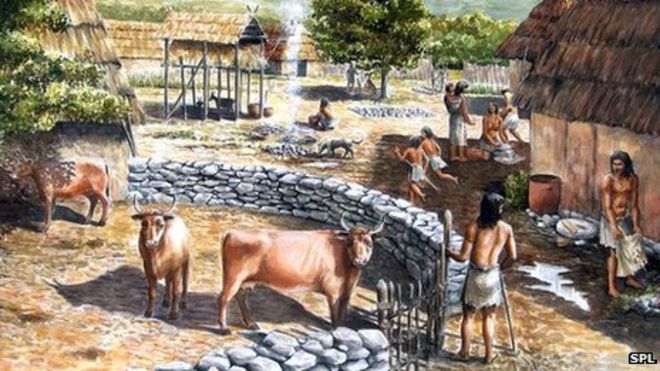 The Paleolithic Era began nearly two hundred thousand years ago, and lasted for tens of thousands of years. The Neolithic Era followed, and was introduced with the rise of plant and animal domestications between twelve and six thousand years ago. The thought of the human species being around for so long is interesting to think about, especially given the fact that humans originated from ancestors in East Africa that date four to five million years back.1 Our ancestors must have been doing something right, considering the fact that the human species survived for such a long time without the technology, medicine, and overall knowledge that we have today. Once we realize that our ancestors from two hundred thousand years ago were so successful in their pattern of living during the Paleolithic Era, we must ask ourselves what changes occurred during the transitional period between the Paleolithic and Neolithic Eras, and whether or not those changes were good.

Humans living during the Paleolithic Era lived in egalitarian societies, that is, societies in which the inhabitants practiced political, economic, and social equality, where each individual in society held the same social status as all other members of society. This egalitarian society was made possible because of their way of life at the time. People lived in small communities of no more than a hundred, and they relied on hunting and gathering as their means of sustenance. They were necessarily migratory because of the limits of their environment, so there was not a real possibility of staying in one place for an extended period of time. Their migratory existence made the accumulate wealth impossible; in fact, wealth was an inconceivable concept for hunters and gatherers. As a result, everyone in society had the same economic standing; since there were no economic differences among individuals of society, there were no social classes. Nor was there the formation of political classes during this time either. Furthermore, everyone—men and women alike—played relatively equal roles in contributing to the survival and well-being of the community.2

This way of life and the egalitarian nature of society remained intact for centuries after the beginning of domestications. However, as hunter and gatherer societies transitioned to herding and farming, and hence to a sedentary lifestyle, a shift began that transformed those societies from egalitarian to stratified societies.3  This shift is one of the major distinctions between the Paleolithic and Neolithic Eras; again, this shift is a direct result of plant and animal domestication, or herding of animals and agriculture.

Agriculture gave the people of the Neolithic Era reassurance that their food supply would be constant; however, it also caused the rise of new issues that communities in the Paleolithic Era never dealt with. For example, the rise of agriculture prompted humans of the time to live in clustered societies, and therefore fostered the spread of parasites and several infectious diseases.4 Furthermore, since agriculture promoted a sedentary lifestyle, Neolithic societies were enabled to accumulate wealth in the form of surplus food supplies. This accumulation of wealth allowed for the social structure of the Neolithic Era to quickly become vastly different from that of the Paleolithic Era due to a focus on the “interests, behavior, and social role(s) of individuals versus a collective group of individuals.”5

Essentially, in the transition between the Paleolithic and Neolithic Eras, human society suffered a loss of social and economic equality and a general respect for all people, and replaced it with a system that required the separation of people based on superficial characteristics such as wealth, power, and gender. The interesting thing about the new class and gender distinctions that accompanied the beginning of the Neolithic Era is that for hundreds upon thousands of years, the human species had managed to exist without the use of class separations. Instead, it was the common practice of communities during the Paleolithic Era that there was no need to cause separation between persons because everyone made an equal contribution to the development and management of their small communities. Ironically, during the Neolithic Era, the rise of agriculture allowed the development of class divisions, as well as the establishment of governments that ruled harshly over society’s non-elites.6

These changes in social structure that arose during the Neolithic Era as a result of agriculture still persist in our societies today; there are still deep and widespread class divisions; there is still gender inequality, and there is still a sense of excessive elite control over the working class.7 Overall, social changes that occurred during the transition between the Paleolithic and Neolithic Eras exhibited a loss in important practices that we have only recently attempted to restore.