From Montgomery to Detroit: Rosa Parks 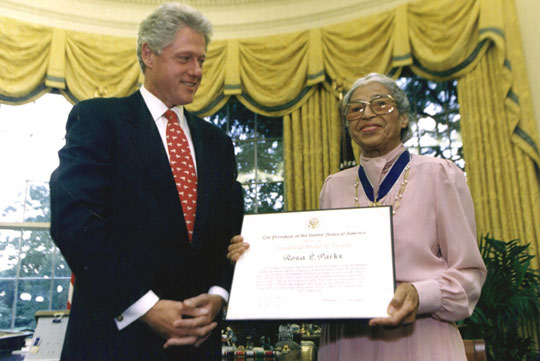 Rosa Parks, a strong, independent Civil Rights Activist, stood up for what she believed in. She’s known for her courageous acts dealing with the Montgomery Bus Boycott and the early phase of the Civil Rights Movement in the 1950s. But what happened in her life after these important events?

As we know, Rosa Parks was arrested for not giving up her seat on a Montgomery bus in 1955. She entered the bus, saw that it was quite crowded with one seat available located in the front “Whites Only” section of the bus. As more passengers boarded the bus, the bus driver demanded that he needed the seat Rosa was sitting in. She refused, and she was arrested.1

After her arrest on that December 1, 1955, Edgar Nixon, another Civil Rights Activist, paid her one-hundred-dollar bond. Immediately following her bail, she proceeded to file a lawsuit against the National City Lines bus company for its segregation practices. After weeks and weeks of this being an active case, the judges finally concluded. The court ruled bus segregation to be unconstitutional. The year-long Montgomery Bus Boycott finally came to a victorious end in Alabama in December 1956.2 During the boycott, Parks was invited by the United Auto Workers Union (UAW) to come to Detroit to speak to the union’s members. Local members of the UAW even raised the money to bring Rosa in. She stayed at the Garfield Hotel because blacks were not allowed to enter or reside at any downtown hotels. The mayor of the suburb of Dearborn had made his views on segregation clear: “Negroes can’t get in here. . . These people are so anti-colored, much more than you in Alabama.”3 Rosa Parks speech about the Montgomery boycott had a great impact on the UAW membership in Detroit.

Rosa Parks became an icon of the Civil Rights Movement. Her leadership skills and perseverance led to multiple doors opened for her, although at first she and her husband found getting employment difficult. In 1957, Rosa Parks moved to Detroit where her brother Sylvester lived. In 1964, Parks helped John Conyers campaign for Congressman, fighting for “jobs, justice, and peace” for Michigan’s first Congressional District. Certain laws prohibited some of Detroit’s residents from voting. Rosa was able to help Conyers win the election by obtaining the help of Martin Luther King. With King’s endorsement, Conyers won by a margin of 84%. Conyers then hired Rosa Parks as his secretary and receptionist, a position she held until 1988. Her daily tasks included dealing with issues such as, education, housing, and segregation.4

The Detroit that Rosa Parks moved to in 1957 was highly segregated. After World War II, Virginia Park, the historic district of Detroit where Parks lived, had become overcrowded, like many other sections of Detroit where African Americans were restricted. The district was further disrupted by the building of a highway, requiring the relocation of 43,000 citizens of Detroit, 70% of whom were African American. This led to increased frustration by Detroit’s African-American population, who were denied access to Detroit’s suburb housing, but told that Detroit was “colorblind” when it came to housing discrimination.5 When blacks attempted to move into the white suburban areas, realtors discouraged them and banks were very hesitant to make housing loans to them. If they succeeded, violence typically followed. By 1963, black citizens began to protest these closed housing practices. On June 23, 1963, Rosa Parks and Martin Luther King joined to lead Detroit’s Great March to Freedom to protest these unfair housing practices. This march drew a crowd over 200,000 people.6

Rosa also recognized that inner-city black students in Detroit, as elsewhere, didn’t receive the kind of preparation in their public schools to go to college. Growing up, Rosa herself barely had the opportunity to attend school, let alone college. With the assistance of Representative John Conyers, she raised government funds to open the Rosa L. Parks Scholarship Foundation. This Foundation gives Michigan high school seniors the opportunity to pursue a college education when they exemplify the ideals of demonstrating academic skills, community involvement, and economic need. This has been very beneficial for hundreds of students from poor Michigan communities since its founding in 1980. Although the process of creating this scholarship was very rigorous, Rosa was able to accomplish this goal.2

On October 24, 2005, Rosa Parks died from natural causes. She is still recognized to this day for her courageous acts.8

I have done some research on Rosa Parks for past projects and new basic information like the bus incident but never knew that she made speeches of her own, or helped out John Conyers on his campaign. Or that African Americans were being relocated and she helped them get their homes back or to find homes of their own. I also didn’t know that she had her own foundation to raise money for high school seniors to go to school. overall, a really great article with great information.

I really like that this article focused on what happened after the events with the bus rather than just on that. With a lot of famous people like her, we usually only focus on the main thing they did that made them famous and don’t pay attention to the other things they did in their lives. It’s important to acknowledge the other ways Rosa Parks left an impact, and not only on the impact she had on bus segregation. I was really glad I was able to read this article and be informed about what happened in Parks’ life after those events.

This article is very moving and tells a great story about someone who everyone has heard of. I especially like how it tells what happened after the famous bus incident. She played a big role in the civil rights movement and together they helped get rid of segregation. Her impact was astounding in helping black people get what they should have rightfully had and most of all, justice. I really enjoyed reading this article.

Reading this article helped me learn some new things about Rosa Parks. It really made me see exactly how she stood out making a special change in how the motion to remove segregated buses and other things got started. Rosa really was the one to start the marking point in changing history, if it wasn’t for her, the horrible conditions of segregation may have lasted a lot longer than it did.

Rosa Parks is an icon. This article highlights some of the feats that she conquered and her work in Detroit following her well-known day in history. When people think of Rosa Parks they only think of her saying, “No.” on a bus one day during the Montgomery Bus Boycott. I really love that this article discusses her work after that and how it has left a lasting impact in Detroit leading to today and hopefully for many more years. Rosa Parks is an inspiration and someone that I will always admire.

I never knew that Rosa Parks was joined by Martin Luther King to lead Detroit’s Great March to Freedom to protest these unfair housing practices. Especially since it had over 200,000 people participating! What a remarkable being, I love how her story is still being shared. She was so brave and strong to stand up against even a mayor. She knew what was right and she wasn’t going to have anything stand in her way.Great article!

The message in this article forms around the events of Rosa Park who took wholeheartedly, and in the beginning , independently in the civil rights movement. However, it was because of where her momentum Rose Parks had begun with her protest in the Montgomery Bus Boycott , it was never the same afterwards. Rosa Parks had found was her linkage to other opportunities that she took part on that made her profoundly a remarkable person.

I’m glad the article expands on Rosa Park’s life including the bus incident that she was made famous across the whole nation for. I’m glad she was able to fight for the rights of people of color. She was able to help improve the lives of millions of people across the entirety of the United States of America. Thankfully strong people like her have existed to pave the way for our modern and accepting society.

Rosa Parks was one of the reasons we got this far in society. If we kept on trying to segregate we wouldn’t have many of the things we have today like our favorite brand or clothes or our best friends we have today and much more. We are all people no matter belief or color and we should all be treated with respect. Rosa Parks stood up for many of the colored people of America making it a better place for all of us.

I knew Rosa Parks because of previous lectures and I didn’t appreciate enough but this article helped me clearing my mind and also, change my point of view about this amazing character in history. I always thought people should be respected equally, but after reading this article and how was the situation in the United States about this topic really impresses me. Rosa Parks stood up for a lot of people and helped what is America now.