Show Me Money: How Gold Altered a Landscape in the Distant West and Thrived during the COVID-19 Pandemic 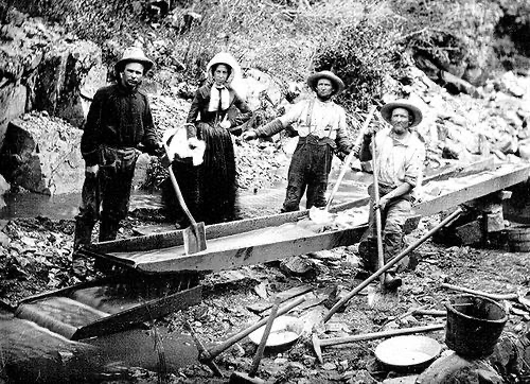 It was in August of 1848 when a man named John opened up a newspaper and read a headline titled, “Additional Interesting Intelligence from the California Gold Region. The Emigration to El Dorado. The Western Route.” The New York Herald newspaper was the first major eastern newspaper to break the announcement that gold had been found out west. John read that on January 24, 1848, a man by the name of James Wilson Marshall had found something that would change California and the future of America as he knew it. The event that happened in early 1848, was arguably one of the most significant events to shape American history during the first half of the 19th century.1 Marshall, a carpenter originally from New Jersey, was working to build a water-powered sawmill owned by John Sutter when he found flakes of gold in the American River at the base of the Sierra Nevada Mountains near Coloma, California.2 It was days after Marshall’s discovery at Sutter’s Mill that the Treaty of Guadalupe Hidalgo was signed, ending the Mexican-American war. California, and any gold that was to be found there, was finally in the hands of the United States.3

So, there was gold out west and the gold rush fever was just beginning; John had seen the news in the paper but could hardly believe it. He hadn’t much money growing up, and as a store clerk, he still didn’t. The idea of finding gold and becoming rich was beyond anything he imagined, even more than the stories of Lewis and Clark’s expedition he heard growing up. As he headed home, John wondered what made gold so valuable. He wanted to see what exactly it was that was causing so many people to flock to California. By mid-June of 1849, John read that about three-quarters of the male population of San Francisco had left town for the gold mines. The number of miners in that area had reached 4,000. As John continued reading, he was shocked by the things that gold could buy – it paid for new mining methods, new inventions, increased production, and other even more daring investments.4 The total value of the gold pulled out of the ground in California astonished John and caused him to almost fall out of his seat. Little did John know, but in the years to come the amount would grow to $75 million in 1851, $81 million in 1852, and by the end of the decade, the total would amount to $594 million.5 In 1852, California’s gold production would grow to 3.9 million troy ounces (121 tonnes), and in 1853 the total gold production for the state would surge to 5.9 million troy ounces (183 tonnes), with rich placer deposits being discovered in the Columbia Basin in Sonora district’s Jamestown.6

Thousands went to shovel, mine, and gamble under the spell of gold fever in hopes of finding fortune. Neither the local nor federal governments contributed to this mass migration; they didn’t even provide traditional frontier law and order. People around the United States (mostly men) borrowed money, mortgaged their property, or spent their life savings to make the journey to California. As papers with exclamatory headlines poured in, John learned that to accommodate the needs of the thousands of would-be gold miners, dubbed the ’49ers, gold mining towns had sprung up across the region. Towns were complete with shops, saloons, brothels, and other businesses seeking to capitalize their own Gold Rush fortune.7 Astounded, John could see that the real Gold Rush was happening in the saloons and stables. The price of everything depended on the needs and the successes of the miners, from commodities like meat and champagne, to products like shovels and explosives, and all the little purchases in between. Newspapers reported fortunes were being made not in gold mining alone, but in more familiar endeavors like sales and services as well.8

As 1849 drew to a close, John had made up his mind to head west. It was clear to John that the Gold Rush had irrevocably changed the United States. John packed his bags, returned his store keys, and headed out to an uncertain future. Now, John would not know how influential gold would remain in the years, decades, and centuries after his departure. John knew not where the future lay but journeyed forward anyhow.

170 years later, gold would remain ever-enduring in the midst of a global pandemic.

In late March of 2020, Sam was running late for class. This would be the last time her class would be meeting for a while. Sam had gotten an email that sent waves of disappointment down her face: the university would be closing for a few weeks due to concerns of a coronavirus dubbed COVID-19. To her, this was something unprecedented, on par with 9/11, which she could scarcely remember. Around the world, businesses were closing and people were seeking refuge at home. Heading home that evening, she had a dreadful feeling thinking about the future.

In a span of 9 months, events spiraled unlike anything Sam had ever witnessed: millions of people became unemployed, multiple small businesses went under, protests shook the nation, and the world seemed to stop as COVID-19 grasped it with a cold, sickly grip. Unemployment levels in the U.S. had reached record highs.9 Overnight, Sam could hear the frantic whispers of her parents at night wondering what would become of them and their small garden shop. The recession of 2008 had seen mass layoffs, but this seemed something else entirely. The stock market had plunged which to Sam meant nothing good.10 The chaos seemed to be unfolding all around Sam, but the only thing Sam could do was keep going. She returned to university in the fall, amid protests from her parents. As Sam pondered why the COVID-19 pandemic would have any effect on the stock market, Dr. Schultz, her professor for Geology went over a new assignment. The assignment was simple: chart the price of gold over time, compare the cost of gold from 1960 to 2020, and write a reflection on reasons why gold prices fluctuate. Sam knew the gist of gold: it was a chemical element, with an atomic number of 79, and looked good in the sunlight. A few clicks and taps later, she had all the information she needed to plot the price of gold. The results nearly took the wind out of her: the cost of a troy ounce of gold adjusted for inflation was roughly $300 in 1960. Today it stood at around $1500 per troy ounce.

The troy ounce as it was named, dated back to the middle ages and a few troy ounces today would eliminate her and her parent’s financial woes.11 If only it were 1848, Sam could search the mines or rivers and find enough troy ounces of gold to become rich beyond anything she ever imagined. She couldn’t shake the thought of how much gold was worth today. She was beginning to sound a lot like those ’49ers who rushed to California and found nothing but empty promises. Daydreaming at her desk, she checked the current value of gold – $1955.60.12 Life was simply unfair.

Writing the reflection took some thinking. Though she wasn’t an economist by any means, she wasn’t clueless either. Somewhere just beneath her excitement lay the answer. There was some connection her brain was trying to make between gold and its value. Then, it hit her like a cold shower – the value of gold fluctuates as people do. When gold was shiny and new during the Gold Rush, everyone wanted it. The price rose and people flocked to the west in droves. It seemed as though times of exploration and uncertainty drastically affected the price at which gold was valued by people. Even during the anxiety of the 2008 recession and the economic turmoil of COVID-19, gold prices skyrocketed. Though she knew other factors were at play, it would be remiss to dismiss the impact that pivotal events, like a pandemic, play on the value of gold.

Turning in her assignment, the world looked no brighter, but things had seemed scarier months ago. Her parents continued to struggle, though they reassured her things would turn around, and so far, they still had a roof over their heads. Appetite howling, Sam got ready to grab a quick bite. As Sam put on her mask, she stepped outside with a new firmness in each step.

Fortunate or not, events played out much like they did for John and Sam. In the mid-19th century, gold lined the roads to California, with plenty of promises of fortune. In the early 21st century, gold prices climbed to extraordinary heights during the pandemic. Gold, an element and mineral, continues to be ever-present in society. It’s undeniable, gold holds an intrinsic and historic value found from the country’s distant past to the modern world.