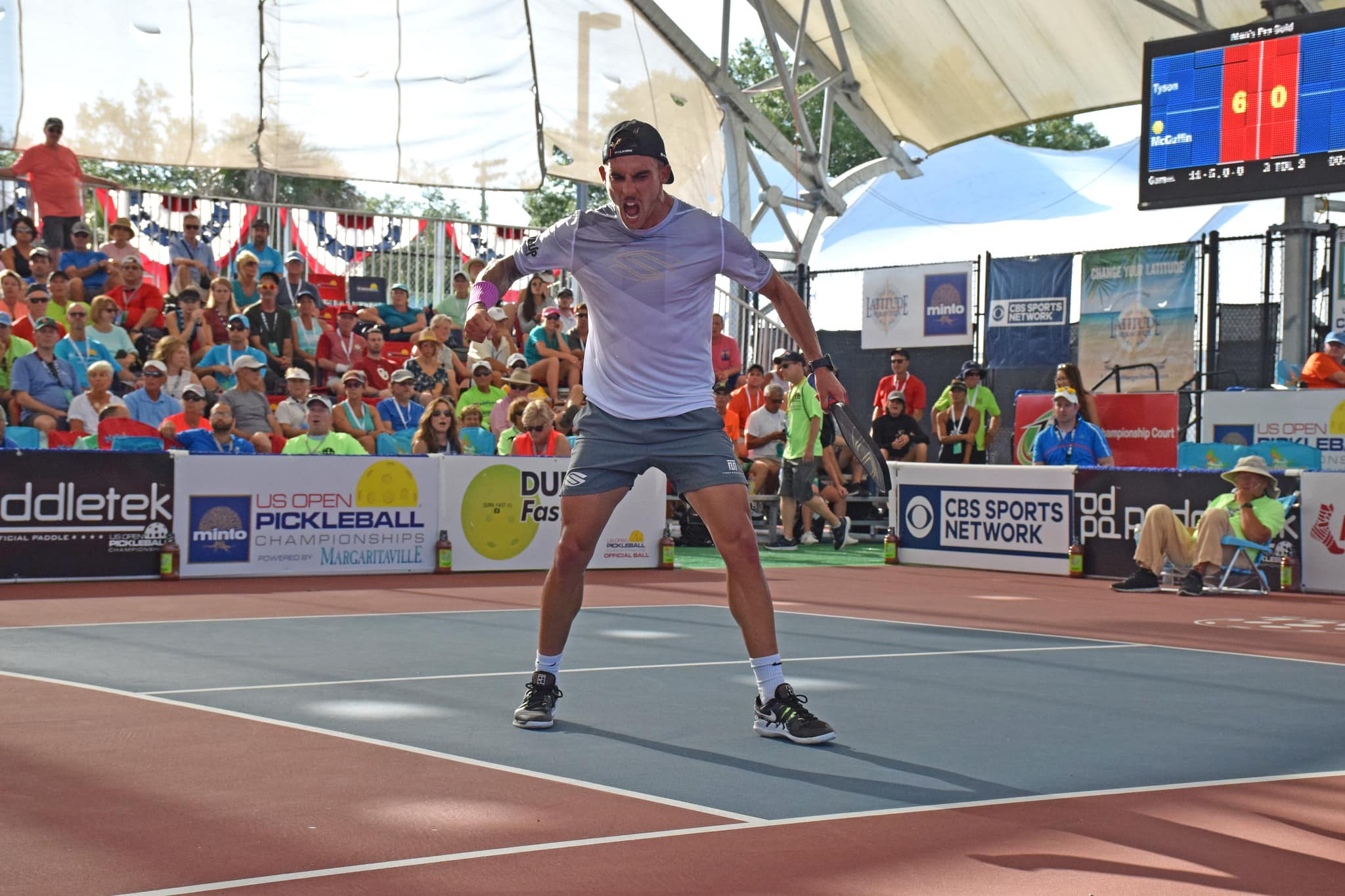 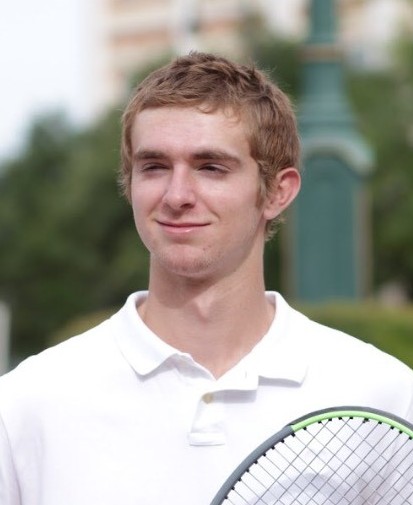 What is pickleball?  Pickleball is a mix between tennis, badminton, and table tennis. It was created by Joel Pritchard, Barney McCallum, and William Bell in the summer of 1965 for their kids. They set up a net to play badminton but only had a whiffle ball to use. The ball was too big for a badminton racquet, so they made wooden paddles. The length of the court is 22 feet on each side of the net and the width is 20 ft. After experimenting with their new game, they decided it would be best to lower the net and allow the ball to bounce so players could drive the ball anywhere on the court.  Another key rule that they added was the non-volley zone, also known as “the kitchen.” The non-volley zone is the 7×20 foot area on both sides of the net. This zone keeps players from running up close to the net and slamming it down out of the air. Because of the non-volley zone, many players have structured the game around “dinking.” Dinking is where you constantly hit the ball in the non-volley zone or “kitchen,” so that the opponent can’t get a chance to hit the ball out of the air as a volley.  The way the scoring works is that you can only win a point during your serve. Once the player who serves wins a point, that person earns 1 point. You play 2 out of 3 games to 11 points, and must win by 2 points. So, if the score is 11-10 the person with 11 would need to win one more point to win the game.1 After they came up with the rules for the game, it started off as a family game and later became international for everyone. One of the reasons pickleball is the world’s fastest growing sport is because the game is challenging yet easy to learn, and it can be played by all ages. It has been fifty-five years since pickleball first started, which means that it is still fairly new to the sports world.2

After a player known as Tyson McGuffin decided to pick up the sport in 2015, pickleball has grown exponentially. Tyson McGuffin is thirty years old and was born in the state of Washington where he grew up as a wrestler, and around age fourteen began playing tennis. He won two tennis state championships and went to state multiple times for wrestling in high school. McGuffin decided to stick to playing tennis and competed at a junior college. He later became a tennis coach in Yakima, Washington. McGuffin wasn’t introduced to pickleball until 2015 when one of his students  he gave tennis lessons to asked him to try out pickleball. He went to the YMCA later that week to try out the new sport that his student was so ecstatic about and fell in love with it instantly. After Tyson McGuffin played pickleball for a month, he decided to play in his first tournament and ended up winning it.  His career in pickleball only kept growing from that point on. He decided to put down the tennis racquet and he focused all of his time and energy into the sport of pickleball. With more wins in more tournaments, he quickly became a well-known player in the pickleball community,  earning his way up to the number 1 ranked player in the world. He gained sponsorships with many companies, his biggest being with Selkirk Sports, a producer in pickleball paddles. In 2019, Tyson McGuffin fell in his world ranking to number 2 after losing numerous times to Ben Johns, a twenty-year-old professional player who is also fairly new to the sport. McGuffin played in many tournaments and earned medal after medal in preparation for one of the biggest pickleball tournaments in the world, the Minto US Open Pickleball Championships in Naples, Florida. He was able to achieve victory in 2018 during this tournament year, beating Ben Johns, but Tyson knows it will be tough to beat him after losing to him in previous tournaments at the beginning of the 2019 pickleball season. He looked to defend his title from the 2018 Minto US Open Pickleball Championships by beating the new star of pickleball, Ben Johns.3

On April 28, 2019 the start of the tournament in Naples, Florida began. McGuffin was expected to get to the finals because of his incredible talents as a pickleball professional, and being world ranked number 2 for pickleball. Tyson flew by each round with ease, controlling every match with his strategic and athletic abilities. He was able to make it to the Finals with little struggle from his opponents. McGuffin was not the only player to make it to the Finals easily; Ben Johns, one of his biggest rivals, world ranked number 1 player, made it to the championship match without any difficulty at all. You can think of them as the Nadal and Federer of pickleball. They are always at the top, competing against one another for the chance to take home the gold. They also strive to either keep the world rank number 1 spot or earn the spot by not losing. Tyson McGuffin warms up before the championships with a lot of energy, ready to play. Ben Johns on the other hand is more relaxed and plays more of a strategic game rather than using up most of his energy. Early afternoon on May 3, which was a sunny day, the match begins between the two best players in the world for pickleball. The match starts off strong with Tyson McGuffin able to take the first point of the first game with an aggressive put away. Throughout the first game McGuffin took command of the points with his intense energy and athleticism that he used during each point. Towards the end of the game, you could tell that Tyson McGuffin was already starting to slow down and get tired after using up so much of his energy at the beginning of the match. McGuffin was still able to win the first game 11-5 because he took a controlling lead early in the game. Ben Johns, during the whole first game, stayed relaxed and conserved his energy. At the start of the second game, you can tell McGuffin came to this tournament to win. Even after using a lot of energy during the first game, Tyson still comes out strong and takes a commanding 7-0 lead. He only needs 4 more points to defend the title and become the World rank number 1 player again. Ben Johns knows what is at stake during the match and battles back to decrease Tyson’s lead to 10-7. The final point is a long dink rally between the two players until Ben Johns misses his last shot at coming back to win. Tyson McGuffin is ecstatic after winning the match that he trained so hard for. He becomes emotional from joy and begins to cry knowing what he has accomplished as a pickleball professional. In the after-match interview, McGuffin says he “trusts his training and working hard on the court all the time.”  Tyson McGuffin was able to stay composed and keep his energy level high to knock Ben Johns off as the number 1 world ranked player.4

To this day, Tyson McGuffin still travels around playing tournaments and promoting the sport of pickleball to all ages. Once the pandemic of COVID-19 hit, it was hard on all the pickleball professionals, with so many tournaments getting canceled and not being able to earn prize money from tournaments; but McGuffin always found a way to play the sport he loves. He also coaches pickleball camps across the United States for all ages and skill levels so he can share his love of the game to others. Tyson McGuffin will leave a tremendous legacy on the sport of pickleball. Pickleball is the fastest growing sport in the world and I believe Tyson McGuffin will be one of the main professionals that lead the way to growing the sport even more as a pickleball ambassador.5

I play tennis for St Marys University and I'm majoring in Computer Science. My graduation year will be 2024.
Author Portfolio Page