Guilty Until Proven Innocent: The Story of Dobie Williams 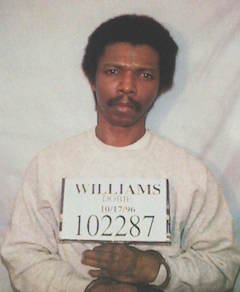 Throughout the history of the United States, there have been tens of thousands of murders, rapes, and other heinous crimes. For over two-hundred years, the United States government intended to establish a fair and judicial system of justice. However, as countless cases of accused criminals have shown, our judicial system is not all that equal. As cases from the past prove, there have been instances where errors in the judicial system occur, resulting in unfair trials. Even worse, some of those inmates who have had unfair trials were convicted and in some cases, even sentenced to death row. So, is our judicial system all that just for all? In many cases it is just; however, in too many cases throughout our history, the system has been unfair to a number of accused individuals. An example of this is the trial of Dobie Williams, a young black man accused of the murder of a middle-aged white woman, Sonja Knippers on July 8, 1984. Dobie Williams had an unfair trial due to his race, few accommodations for his mental health, and an inept court-appointed attorney that he was provided.

Geography and race had a role to play in the unfair trial of Dobie Williams. Knippers was a white woman in her early forties, who was brutally killed in the bathroom of her southern home, located in Many, a small town in Lousiana, which was not a good place for Dobie, an African American, to be accused of murdering a white woman. Sister Hellen Prejean, a writer and a spirtual adviser for death row inmates, who accompanied Dobie throughout his trials and execution dates, explains that Dobie never had a fair trial due to being assigned an all-white jury during his hearing for the murder of Knippers; in addition, all of the judges, district attorneys, and the local media during the time were all white, further explaining possible prejudices that could stacked the odds against him. Many is a small town located in north central Louisiana, and it was not a city. It was a small, quiet, and mostly white town, where murder, or basically any other crime, was erratically unusual, especially in 1984, meaning that when crimes did happen, it was a huge deal. Consequentially, being a black individual accused of murdering a middle-aged white woman in a small town in the south was a bad situation to be in. We will never know for sure whether an all-white jury had anything to do with the conviction of Dobie Williams. But it still was not looking good for him, due to where the murder had taken place and the significance of the crime. In her book, Prejean, realizing the social injustices in Louisiana during the 1980’s, exclaimed that Dobie was, “in big trouble.”1 Prejean understood how geography had a role to play in the conviction of Dobie. Innocent or guilty, being a black minority during the time of Dobie’s trial in a small town located in the heart of the south was no easy thing to endure.

There are similar cases to Dobie’s in which a fair trial was not given because of such geography. In 1982 in Greenwood South Carolina, race played a significant role in the conviction of twenty-three-year-old Edward Lee Elmore, who was accused of the rape and murder of seventy-five-year-old Dorothy Edwards. According to Bishop Emmanuel Spearman, who was pastor to Edward, race played a major role in the trial.2 Spearman made a plausible statement about the trial because Edward, the African American, was accused of the murder of an elderly white woman in 1982, which was a severe offense. This could have given him an unfair trial due to the murder taking place in a small town in Greenwood, South Carolina, where just like Many, murder was rare. Something as significant as both murder and rape of an elderly white woman in a small, southern town would be considered heinous.

Dobie Williams did not have well-suited accommodations. In the 1980’s, individuals such as Dobie who had an IQ below 70, did not yet have the defense based on the Supreme Court case, Atkins v. Virginia, which ruled that capital punishment is unconstitutional for defendants with mental retardation.3 This meant that below average IQ could not be used in defense of Dobie Williams until the Supreme Court case was actually ruled. This can be related to Edward Lee Elmore, who had an IQ below 70, which made it difficult for him to understand the questions that were being asked while defending himself in a courtroom, when he was asked questions by district attorney, William T. Jones, who said, “You want this courtroom to believe you’re this quiet don’t you?”4 Edward lacked the competence to understand how to effectively defend himself while being asked harsh questions, due to being mentally handicapped. Furthermore, according to Celia B. Fisher, studies have demonstrated that “contribution to legal decisions concerning competency and predictions of future violence places the defendant at the mercy of an imperfect and unjust system.”5 The study shows that a defendant’s mental status is critical in the fate of that individual who is being accused of a heinous crime. Dobie Williams was a mentally-handicapped individual on trial for a severe act, and who was unable to properly defend himself, thus resulting in him to be at the mercy of a flawed judicial system.

Dobie Williams grew up in an impoverished childhood, giving him no other choice but to be assigned Michael Bonnette, his overworked public defender for his case, who had limited experience in death penalty cases, giving him an unfair trial. Sister Helen Prejean exclaims, “They know the difference in treatment given the O.J’s of the world in contrast with the NoJ.’s, forced to accept overworked, underfunded, or inept attorneys to defend them.” The fact of an incompetent, overworked, and underpaid attorney being assigned to Dobie, resulted in him making mistakes that affected the whole trial. During his trial, Dobie’s overworked public defender failed to successfully acquire any independent forensic testing, resulting in him being unable to provide a proper counter to the prosecutor’s claim against him. This mistake allowed for the argument against Dobie to be uncontested for thirteen years. Furthermore, it was Dobie’s financial situation that not only affected his opportunity to be assigned a more effective private attorney, but it also prevented him from having certain tests performed that could have aided him during his trial.6

There are other cases that explain the error of our judicial system. The trial of Dobie Williams is just one case out of too many that has been unfair. According to Sister Helen Prejean, there have been numerous cases of inaccuracy by the state and federal courts, thus compelling them to free 117 innocent death row inmates since 1973.7 Prejean presents the dramatic statistic in her book, The Death of Innocents, which was published in 2004. Imagine what the number has been now since the book was published. In addition, in 2000, Illinois’s governor, George Ryan, proclaimed a moratorium for the death penalty of the state, confirming that 13 death row inmates have been exonerated in the past 23 years.8 The appalling statistics illustrate the probable flaw in the judicial system of the United States, making it more likely to believe that Dobie Williams had an unfair trial.

Minorities in southern areas who are accused and convicted of a crime are more highly exposed to unfair trials compared to other individuals. Even though the right to a public attorney is granted with the intention of an equal judicial system, in reality, that is just not the case. Dobie Williams could not afford a private attorney who had experience with the death penalty, resulting in him being unable to receive the proper defense that he deserved due to the inept, overworked, and underpaid public defender that he received. Dobie was unable to defend himself due to his below 70 IQ. With all of the facts in place, was the judicial system in the case of Dobie Williams all that just when there have been numerous accounts of accused inmates being exonerated due to a flaw in the system?