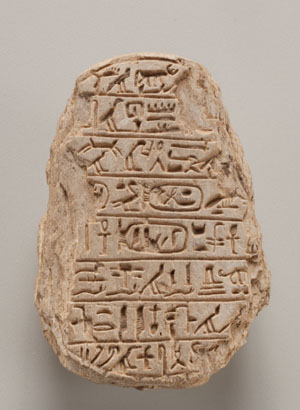 The word hieroglyph stems from two Greek words; hiero meaning holy and glyphs meaning writing. In 1799, the French Captain Pierre Bouchard discovered the Rosetta Stone, which had two languages on it.1 The stone was carved with the same text in two different languages, Greek and Egyptian, and in three different writing systems, which included hieroglyphic. With the finding of the Rosetta Stone, scholars were able to unlock the hieroglyphic code. Hieroglyphs were the earliest form of Egyptian formal writing that combined logographic and alphabetic elements. The writing was used from around 3200 BCE until about 395 CE. The writing incorporated between 700 and 800 symbols in it, and not every Egyptian was able to read or write it.2

The supplies used to write hieroglyphics were quite similar to the supplies that we use to write today. The Egyptians wrote hieroglyphs on papyrus reed. Papyrus reeds were water or marsh plants with tall straight hollow stems that were flatten, dried, and stuck together to make pages. They utilized a pen and ink to write on the fine papyrus paper. The pens that they used were thin sharp reeds that they dipped in ink. The ink that they used came from crushed plants that they mixed with water. The hieroglyphic system was written in long lines, usually from right to left or top to bottom. The direction in which it was read relied on which way the human or animal figures were facing. The direction in which they were facing indicated the beginning of the line.3 No spacing or punctuation were used. It was divided into two main groupings of writing; phonograms, and ideograms with incorporated determinatives into it. The phonograms were the glyphs that represented sound in the writings and represented single constants and combinations of constants. The ideograms represented objects and ideas that they were trying to convey. They either represented the actual object written or something that was closely related, such as legs for movement. The writing also utilized determinatives. Determinatives were hieroglyphs that were not spoken or translated but helped make the meaning of the word clearer. Determinatives were also used at the end of words to indicate the end of a word, as the Egyptians did not place spaces between words or sentences. Some symbols utilized within the writing could represent an entire sentence or saying. The Egyptian writing did not utilize the use of vowels, so it is impossible to understand exactly how they pronounced hieroglyphic texts.

The Egyptians would use their hieroglyphic writing on a variety of locations and documents. They would use the writing  in schools, on tombs, and on temple walls. As most Egyptians could not read or write, only the privileged class, such as royals, nobles, and priests, along with scribes could read or write hieroglyphs. Scribes were Egyptians that went to a special school and were trained to write and read the writings. Egyptian priests also used hieroglyphics to pen prayers, prepare tomb stone surfaces, and for guides of the afterlife placed on the inside of their deceased coffins. Many Egyptians believed that writing hieroglyphics on their tombs and in their coffins would help lead the dead to the afterlife.4

Civil officials would utilize the writing to write royal documents of long-term importance, record historical events, and document important calculations. An example of an important calculation that the Egyptians would record using the writing would be the depth of the Nile River on specific days of the year. Lastly, they carved hieroglyphic symbols on their jewelry to decorate it and other luxury items that they posed.

In conclusion, deciphering the Egyptians hieroglyphics has provided much important information about the way of life in ancient Egypt. The Egyptians felt it was important to document and communicate important facts about their religion, government, and daily lives. By utilizing hieroglyphic writing, the Egyptians were able to preserve their history, ideas, and beliefs, and help us see how they lived.