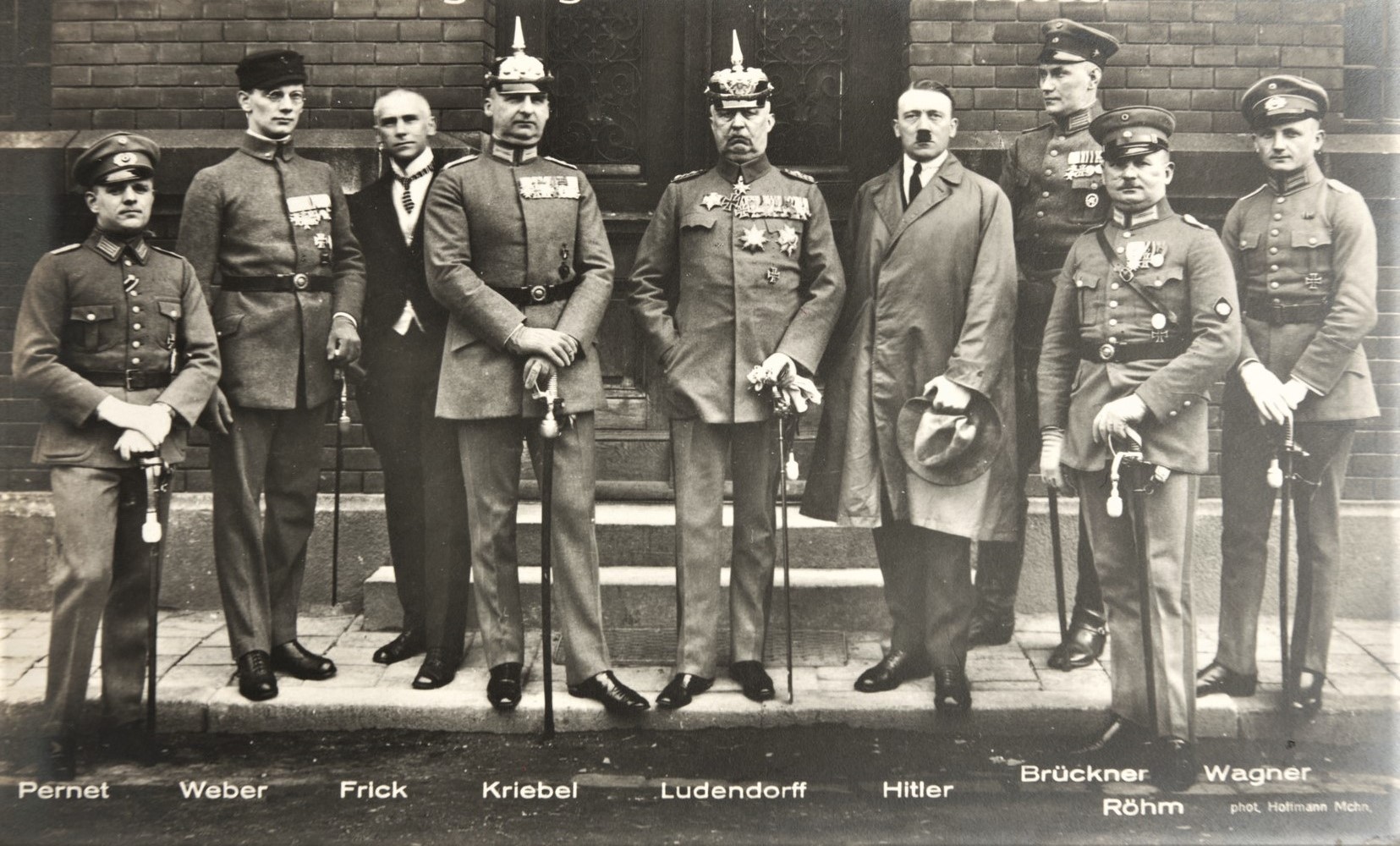 On November 8, 1923, at around 8:30 pm, Adolf Hitler and his armed bodyguards of the SA surrounded the Bürgerbräukeller Beer Hall in Munich, Germany. Along with his bodyguards, when Hitler barged into the Beer Hall, he immediately fired his gun into the ceiling and shouted, “The National Revolution has begun. This building is occupied by six hundred heavily armed men. No one may leave the hall. Unless there is immediate quiet I shall have a machine gun posted in the gallery.”1 Hitler proclaimed that both the Bavarian and German Reich governments had been removed and there was now a provisional government being set up. Many of those present in the Beer Hall did not know what to believe. One thing that they were sure of was that the rifles and machine guns were real, so some followed Hitler’s orders. Though many were in amazement, there were some businessmen who were very upset, and one that even yelled for Hitler to shoot. However, others feared for their lives, afraid that a massacre was about to occur.2

The event underway has come to be called the Beer Hall Putsch. A Putsch is simply the German word for a military takeover of the government, or, in French, a coup d’etat.3 The idea for this Putsch came to Hitler from Benito Mussolini, who had staged a triumphant March on Rome in 1922, just the year before. Many of Mussolini’s followers were lower-middle-class Italians, and with their help, he threatened to take over the Italian government with his Fascist march on Rome. Like other Italian populist leaders before him, he put his reputation at risk in order to obtain power. If Mussolini’s march were to fail, he could lose his status in society, along with his respect.4 Mussolini’s first step was to create his own government. Without one, he would have no means to take over; so fascist militias and thugs began gathering from all over Italy.5 Once Mussolini gained power, he began to turn Italy into a Fascist state.6 Hitler imagined orchestrating a similar March on Rome that would start for Berlin from Munich’s famous Odeonsplatz the following morning, November 9, 1923. Odeonsplatz was just a few blocks away from the Bürgerbräukeller Beer Hall where Hitler and his assembled men had gathered that night.7

Through the Beer Hall, Hitler managed to push his way to the front of the hall where he took charge of the crowd. “He then ordered the Bavarian triumvirate—von Lossow, von Seisser, and von Kahr—into an adjoining room, where he bullied them at gunpoint into backing his putsch.”8 The three men were all government officials: Lossow was a general major, Kahr was the Minister President of Bavaria and Colonel, and Seisser was head of the Bavarian state police. Though they were already government officials, Hitler apologized to the men for the interruption on their speech and made a promise to them that they would have good jobs while he was in power. Hitler wanted the triumvirate on his side so that his Putsch would have the backing of actual government officials. However, when he tried to scare the three men into supporting the coup, it didn’t quite work, and they refused to talk or give any information that would give Hitler confidence that he had turned them. He then waved his pistol at them and shouted, “I have four shots in my pistol! Three for you, gentlemen. The last bullet for myself!”9 Though he really didn’t have their full support, Hitler believed he did. Once he thought he had the officials in control, Hitler would return to the crowd and give a speech. The audience went crazy over the speech. Their enthusiasm showed Hitler that he had already won them over. With Ludendorff being around as well, he had their support even more, because Ludendorff was respected and very well-known. Hitler’s first few steps had been made and the Putsch was, so far, going as planned, or so he thought.

So by this point, the Putsch had officially begun, and even though it had just begun, many problems were already occurring for Hitler. One way that Hitler planned for his Putsch to work was by seizing communication centers and state offices in Munich, and using the triumvirate to coordinate the military and police efforts to come. “While the rebels temporarily took over some offices, including the municipal headquarters of the Reichswehr and Munich police headquarters, they failed to secure other key centers.”10 The telegraph office was one key center they failed to seize, which allowed for news of the Putsch to get to Berlin and for orders to be received from General von Seeckt at Berlin military headquarters.11

The triumvirate, which were the three government officials, was left to Erich von Ludendorff to deal with. Ludendorff was currently Deputy Chief of Staff to the German Second Army under General Karl von Bülow. But more importantly, Ludendorff had been one of the most important generals for Germany during the first World War, and was hailed by many Germans as not only a war hero, but also as one of the most patriotic Germans of the day. Because Ludendorff was in such a high position in the army, Hitler wanted to use him as a figurehead in the march and even asked him to lead it. Ludendorff was also able to convince the triumvirate to follow Hitler’s orders, and in return, Hitler would give them the political roles that they wanted in the future government. Ludendorff then freed them, and once they were free, they immediately began planning to respond to the Putsch. Since Hitler and his followers had failed to seize all key centers, such as the ones in the city, the triumvirate was able to call suburban troops and police to Munich. Because these authorities knew what Hitler was doing, they planned well to meet him and his troops in the morning. In the time that they planned out what they would do, Hitler doubted for several hours whether he should continue the march to Berlin, because he found out about the betrayal of the triumvirate. Hitler delayed the start of the march for so long that the Bavarian authorities knew exactly what to do to defend Munich.12

“In a last ditch effort to rally citizens and soldiers, Hitler led around 2,000 Nazis and other Kampfbund members in a march to the Feldherrnhalle on the Ludwigsstrasse.”13 When the march reached Odeonsplatz, the marchers and Munich law enforcement met. There was a shootout where fourteen Nazis and four police were left dead at the scene; however, the march completely ended there and all the rebels fled from the scene. Later on, another two Nazis died, with the march being a complete failure.14

Eventually, Ludendorff was not charged at all, whereas Hitler was put on trial for treason and found guilty. “Hitler was sentenced to five years imprisonment in the old fortress of Landsberg and was eligible for parole after serving six months.”15 He was sent to jail on April 1, 1924, and was released a little less than nine months later, on December 20. Though many would think being imprisoned was terribly bad, Hitler, unlike many, received special treatments and in just the few months that he was incarcerated he was allowed frequent and constant visitations. During that time, he also wrote his manifesto, Mein Kampf.16 What did Hitler learn from this episode of the Beer Hall Putsch? He learned that if you want to take power in Germany, a Putsch is not the way. Beginning in his Landsberg prison cell Hitler began plotting his next move. He would come to power in Germany, not through an illegal Putsch, but through the legal means of the ballot box.