Hydropower at the Glen Canyon Dam and Lake Powell: Challenges to Stay Efficient 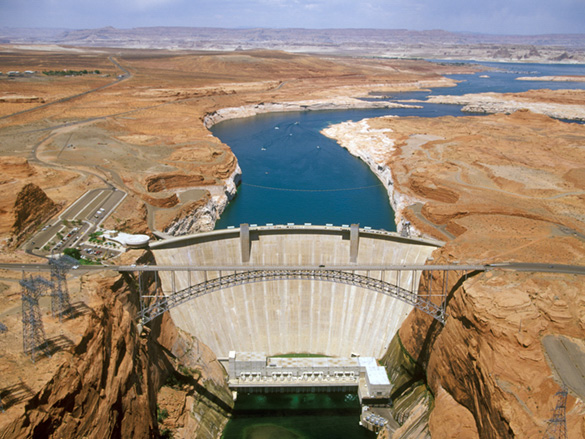 Hydroelectric power is a common renewable energy source utilized by various countries and territories across the planet. As of 2018, hydroelectric power made up 17% of the world’s energy total electricity production and 78% of the world’s renewable electricity generation in 20151. While hydropower can fill a specific gap in electricity generation, one of the biggest issues impacting it is climate change. Climate change and hydropower are closely related to each other. Hydropower is a renewable energy source that assists in the avoidance of greenhouse gas emissions and mitigation of global warming. While hydropower is a great alternative to fossil fuel energy sources, changes to the hydrologic (water) cycle that result from climate change can largely impact its efficiency by reducing river discharge rate, lowering reservoir water levels, and reducing overall hydropower energy generation2.

Since 1980, hydropower electricity generation has grown significantly worldwide (Fig. 1) and is expected to continue growing. This is especially evident in developing countries where the technical hydropower potential—the portion of a resource that can be captured and converted into electricity using hydropower—is growing and still able to be utilized (Fig. 2)3,4. While hydropower is growing worldwide, climate issues such as changes in temperature and changes in precipitation are impacting hydropower generation and efficiency. Changes in precipitation can bring about decreased precipitation amounts, potentially increasing the frequency and magnitude of droughts, while leading to lower water levels for rivers or lakes. Precipitation, in the form of rain or snow, adds to the overall levels of these water bodies and increases the efficiency of the associated dam and the overall energy output. With changes to precipitation occurring more frequently, certain areas are less likely to experience consistent rainfall or snowfall and the water levels will begin to drop as usage increases5. Changes in temperature can also affect hydropower generation by causing increased evaporation of water, longer periods of drought, and increased levels of snowmelt. Increased evaporation of water means that water reservoirs, like lakes, that dams use for power generation will lose more water than in previous years. With the loss of water, the overall output of energy can decrease as reservoir water levels begin to fall. Similarly, longer periods of drought mean less rainfall in the area, less direct recharge of the water reservoirs, and a decrease in stream discharge. The same can be said about increased snowmelt. While an increase in snowmelt can bring about more recharge, less winter snow will be available to melt in the spring, ultimately leading to a decrease in recharge rates and streamflow (the amount of water flowing in a channel) for the river or reservoir6.

Although the United States has already used the majority of its hydropower potential, as shown in Figure 2, hydroelectricity generation is still largely utilized along the west coast across Washington, California, and Oregon as well as in the southwest across Arizona, New Mexico, Nevada, and Utah8. In this area, multiple river systems help supply surrounding communities and cities with fresh water and sufficient hydroelectric power. The Colorado River Basin, one of the key river systems in the western United States, spans 7 different U.S. states before crossing into northern Mexico where it empties into the Gulf of California9. The river system is split into 2 regions: the Upper River Basin and the Lower River Basin. The Upper Basin is primarily responsible for recharging the entire river system, where the water then flows down into the Glen Canyon Dam and Lake Powell. Lake Powell acts as a reservoir for the Glen Canyon Dam, supplying water to the dam during dry periods. Lake Powell also provides long-term water storage to Upper Basin states and also provides the required delivery of water to the Lower River Basin10. However, with climate change making more significant changes to our planet, the Upper Colorado River Basin and Lake Powell are beginning to face the effects of lower water levels, decreased precipitation, and less recharge. The biggest problem faced at Lake Powell is lower water levels (Fig. 3). This dramatic decrease in water levels is caused by increased temperatures and prolonged drought periods. The arid region around Lake Powell causes rainfall to be sparse, with the area only receiving 6.46 inches of rainfall annually12. Because of this, 75% of the Upper River Basin’s recharge comes primarily from snowmelt. Snowfall from surrounding mountain ranges creates snowpacks during the winter months that last until spring. During late spring and the first half of summer, the snow melts and the runs off into valleys and tributaries within the Upper River Basin before flowing into the Colorado River and Lake Powell13. The water levels of Lake Powell usually increase between May and July and decrease for the rest of the year14. Since rising temperatures are causing reduced precipitation, the amount of snowmelt to recharge the Upper River Basin will decline. As a result, the normal seasonal increases in water level in May to July will shorten, and resulting in longer periods of lower water levels with less opportunity to recharge15. The region will also begin to see megadroughts and increased evaporation from the lake surface, further lowering water levels16,17,18. So what does this mean for hydroelectric power generation by the Glen Canyon Dam? Hydropower within the Colorado River Basin is largely dependent on reservoir storage and streamflow. Streamflow primarily affects the turning of turbines within the dam, which turn a generator, generating electricity that is distributed across the energy grid to surrounding communities. Climate change is causing the amount of hydropower generated by the dam to vary seasonally. For example, in a study observing the impacts of climate change on the Skagit River Basin in Washington state, it was found that hydropower generating capacity changed substantially on a seasonal basis. The largest changes to hydropower generation occurred in spring, winter, and summer. Winter and spring saw an increase of about 19 percent in hydropower generation, but summer saw a decrease in generating capacity of 29 percent20. While the 19 percent increase in power generation is expected to meet the winter energy demands of the area, summer energy demands are high, as more power is needed to power air conditioning and cooling systems. With a summer reduction in hydropower generation of almost 30 percent, energy demands are a concern. This same trend can be observed at Lake Powell. It is expected that precipitation across the Upper River Basin will increase during the winter months and decrease during the summer months, leading to an overall increase in streamflow during winter and a sharp decrease in summer21. Currently (Spring 2022), the water levels of Lake Powell sit at around 3,522 feet above sea level, 32 feet above the dam’s critical elevation point, the lowest point where the dam can continue to efficiently generate power22. Changes to streamflow caused by infrequent precipitation and reduced recharge, alongside significantly lower water levels caused by changes in temperature, are currently putting Lake Powell in a crisis where it may be unable to continue generating power. As the 2022 summer season starts, electricity demand is likely to increase, and the amount of hydropower output is expected to decrease beyond record lows as a result of low water levels (Fig. 4)23,24. To maintain appropriate levels of hydropower output, the United States Bureau of Reclamation (USBR) is beginning to change annual operations at the dam for the first time. The USBR has begun plans to increase the flow of water by using 500 thousand acre-feet (kaf) of water from Flaming Gorge Reservoir on the Green River, a tributary of the Upper Colorado River Basin, as well as decrease the annual outflow of water from the dam from 7.48 million acre-feet (maf) to 7.00 maf. The USBR has previously altered the amount of water released from the dam when they held back 350 kaf of water before spring to compensate for the lack of spring runoff that recharges Lake Powell. This year, they plan to hold back an additional 130 kaf to account for decreased water levels26. While changes to managing Glen Canyon Dam’s hydropower output are underway, the resulting change in discharge to the Lower River Basin is beginning to spark concerns regarding less water being introduced into the Hoover Dam and Lake Mead System. Required shortage reductions and water-saving contributions for Lower Basin residents are already being established to compensate for the lack of newly introduced water from the Upper River Basin27.

In the past, arguments were made to remedy the increased evaporation rates of Lake Powell through a movement called “Fill Mead First”, which pushed for the water from Lake Powell to be released downstream into Lake Mead, essentially creating one reservoir with a smaller surface area than two separate ones. The goal of the movement was to reduce the overall evaporation rates observed in Lake Powell, and was sparked by research conducted following Glen Canyon’s construction in 196628. Although the idea of breaching Glen Canyon to fill Lake Mead gained significant traction, Jack Schmidt, a watershed scientist, and scientists from Utah State University were able to provide more updated data than what supported the Fill Mead First movement and identified that seepage–the leaking of water through porous material–was the main issue. Using newer methods of projections than those that sparked the Fill Mead First movement, scientists were able to discern that the amount of water lost was largely due to the age of the dam. Considering the initial research was conducted early in Glen Canyon’s life, the new research conducted almost 40 years later in 2016, found that since the desert surrounding the reservoir was not yet acclimated to the reservoir, more water was soaking into the ground than observed in 2016. While this proved that the Fill Mead First Movement would not solve water management problems, it opened up uncertainty about the state of Glen Canyon and Lake Powell, increasing the amount of research conducted on the two in subsequent years29.

While we certainly know more about Lake Powell and how to handle the ongoing issues faced there, climate change has always been the primary cause of problems at Glen Canyon Dam, in Lake Powell, and throughout the Upper Colorado River Basin. Changes in temperature and precipitation threaten the cycle of recharge and discharge that the basin has seen since the dam’s construction in the mid-1960s. Now, as increased evaporation, less snowmelt, and lower reservoir water levels threaten the power output of the Glen Canyon Dam, stricter measures to ensure Glen Canyon can adequately produce enough power to Upper Basin states have been taken. With ongoing climate issues, concerns about whether or not the dam will be able to provide enough power while also releasing enough water to supply the Lower River Basin dominate news headlines in the affected areas. Current projections state Glen Canyon is around 25% likely to hit its minimum power point within the next 5 years, and, with the effects of climate change ramping up every year, stricter means of water flow regulation and power usage are likely to be necessary to ensure the viability of the entire Colorado River System in the long term30.

I think it is super smart to use water to generate power. The water is going to be there so we might as well use it to generate power. I knew we used this type of energy, however I did not know how much we used hydroelectric power in the United States. On the other hand, I think we need to find a way to not have the side effects of hydroelectric power. The water we are using is suffering from this type of generation and we need to find a way to limit the damage we do creating power.