Teddy Roosevelt, the Birth of the Progressive Party, and the Speech that Slowed a Bullet 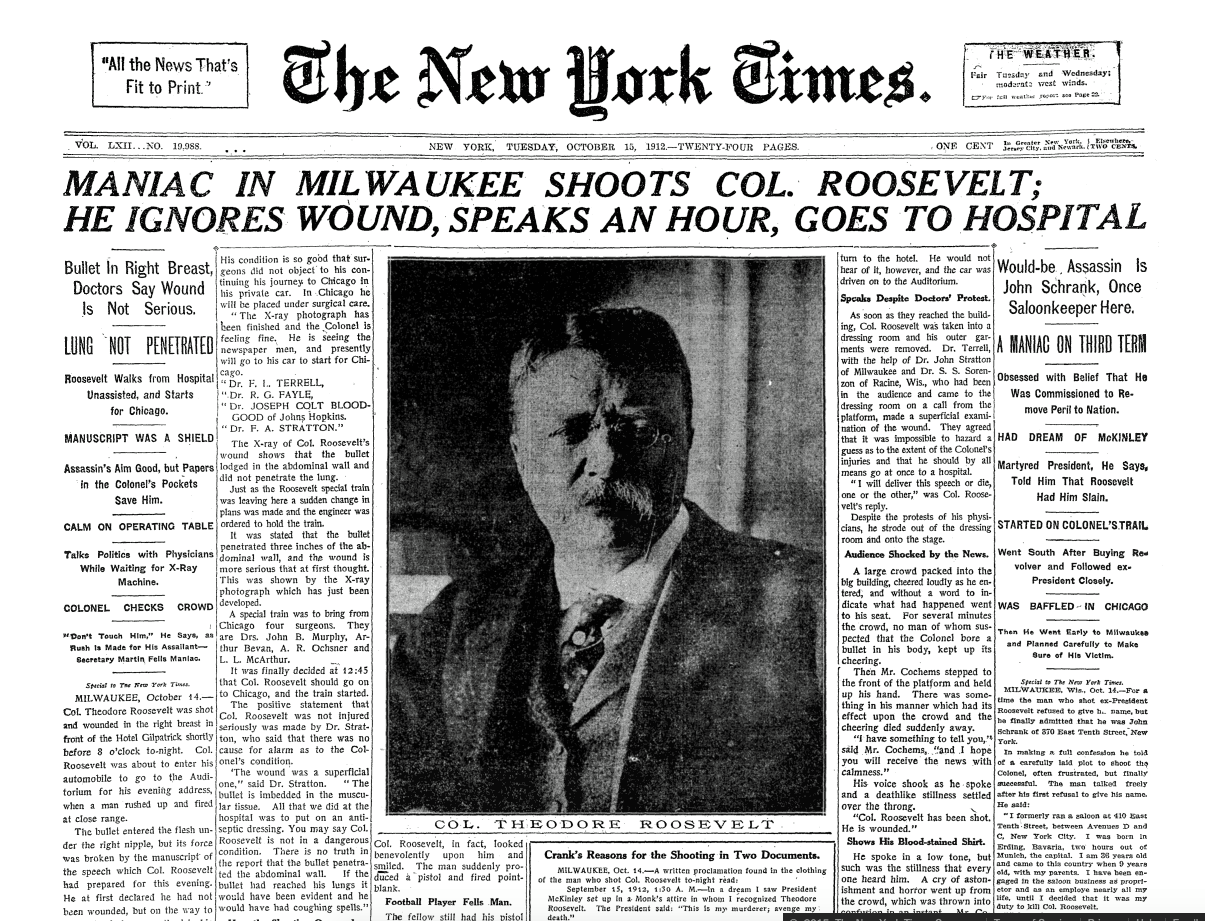 Stepping into an open-air car just after 8 pm, Teddy Roosevelt stood to wave to the adoring crowd that had gathered around him. Just as he raised his hat, the shot of a .38 colt revolver rang out from no more than five feet in front of him. As he fell back into the car, the crowd quickly disarmed the would-be assassin and began to attack him.1

Many events led up to this exact moment. Nearly twelve years earlier, Roosevelt had been William McKinley’s Vice President when McKinley had died from a similar assassin’s bullet just six months into his second term. Roosevelt’s subsequent rise to the presidency upset many in his own Republican Party, due to the fact that he had been placed as McKinley’s Vice President for the sole purpose of removing him from positions of power, particularly in the New York legislature. He had been a part of New York politics off and on from the age of twenty-three. But many in his own party were unhappy with Roosevelt because of his support for political reforms that would end corruption in politics, including that of the Republican Party Machine in New York, which made most of the major decisions for the entire Republican Party. At the time, the office of Vice President was seen as a dead-end for one’s political career, because it lacked any real power; so the move to “elevate” Roosevelt to be McKinley’s running-mate in 1900 made sense for the Party Machine to support. Unfortunately for them, McKinley’s untimely death foiled their attempts to end Roosevelt’s political career, and ultimately they fast-tracked him into the Presidency at the age of forty-two, which made him the youngest person to ever be sworn-in to this position. Roosevelt went on to become the party’s undisputed leader and easily won the Presidential election of 1904. During his years in office, Roosevelt was quite the well-rounded President. He worked on everything from domestic programs regulating railroads and food to conservation acts to foreign policy, even winning a Noble Peace Prize in 1906 for his mediation of the Russo-Japanese War.2

Though, when the election of 1908 rolled around, having already technically served two terms as President and wanting to follow the precedent of not seeking a third, Roosevelt stepped aside to allow the rise of William Howard Taft, his Secretary of War, to take his place on the Republican ticket. With Roosevelt’s backing, Taft took the Presidency easily. But not long after Taft’s administration began, Roosevelt, who had become increasingly progressive in the later years of his second term, did not like that Taft’s views and policies continued to move further and further right. Not only were his views and policies moving further right, but Taft directly undermined several policies and programs that Roosevelt had approved and developed during his two terms. This prompted some in the progressive wing of the party to support a more progressive man to take his place on the Republican ticket in the election of 1912. For a while, it seemed as though Robert La Follette, a Republican Senator from Wisconsin, would become the progressive opponent of Taft, but after several missteps and his sanity being called into question, Roosevelt announced his decision to seek a third term. Support began to build for Roosevelt, and ultimately he chose to challenge Taft at the Republican National Convention, with the backing of several prominent members of the party. Roosevelt narrowly failed to secure the nomination, again because of plots against him within the Machine and the committee giving all contested delegates to Taft. After this loss, Roosevelt walked out of the convention, and immediately created his own party, the Progressive or “Bull Moose” Party, that was built on Roosevelt’s Square Deal platform focusing on helping all classes of people, not only with the support of those that backed him at the Convention, but several others as well.3 With the party bitterly split, Roosevelt did more campaigning himself than any of the other candidates, stopping in thirty-eight states. The exhaustion of all of the campaigning, and some bouts of sickness, had caused some previous speeches to be cancelled, or postponed, but, Roosevelt, determined to not cancel any more, arrived in Milwaukee, Wisconsin, on October 14, 1912, stopping first to have dinner at the Gilpatrick Hotel, before his speech. After dinner, on the way to his car, he met the assassin’s bullet.4

Immediately after the shot, Roosevelt quickly regained his footing and called the crowd off of the man. Many in the crowd even called for the man to be killed on the spot, but Roosevelt insisted he not be hurt.5 Roosevelt then attempted to determine why the assassin had fired at him, but to no avail;  though, later, it was found that a note in his pocket offered a reason of sorts: John Flammang Schrank, the would-be assassin and unemployed saloon keeper, who adamantly opposed the idea of three-term presidents, had a dream in which McKinley rose out of a coffin, pointed to a painting of Roosevelt, and asked him, Schrank, to avenge his death. Once Schrank was whisked away, everyone was sure that Roosevelt would immediately head to the hospital. But, being not only a skilled hunter, but anatomist as well, Roosevelt knew that since he was not coughing up blood, his lungs had not been hit. So he decided to head on to the auditorium to deliver his speech, to the protest of most everyone.6 Upon his arrival, he did allow a few doctors to assess the wound, but they saw that his fifty-page manuscript, which had been folded in half, and his lead-lined glasses case, had slowed the entry of the bullet into his chest; and so his speech would go on.7

With a clean handkerchief pressed against the hole in his chest, Roosevelt took the stage. The first words of his speech were ones that no one in the audience fully expected: “Friends, I shall ask you to be as quiet as possible. I don’t know whether you fully understand that I have just been shot.” Shock traveled through the audience, with many even calling out that his story was fake. Opening the breast of his jacket, exposing his blood-soaked shirt, he continued, “It takes more than that to kill a bull moose.”8

Roosevelt then went on to deliver an most ninety-minute campaign speech titled “Progressive Cause Greater Than Any Individual,” that outlined his idea of “New Nationalism,” which was based on the beliefs of the safety and welfare of workers coming first before profits, the protection of property rights, and, what Roosevelt believed to be the most important, the welfare and protection of all people, no matter their class. His belief in the cause was so strong, that he even mentioned it as one of the reasons that he was still giving the speech:

“And now, friends, I want to take advantage of this incident and say a word of solemn warning to my fellow countrymen. First of all, I want to say this about myself: I have altogether too important things to think of to feel any concern over my own death; and now I can not speak to you insincerely within five minutes of being shot. I am telling you the literal truth when I say that my concern is for many other things…I am in this cause with my whole heart and soul. I believe that the Progressive movement is for making life a little easier for all our people…I am absorbed in the success of that movement.”9

He only stopped once, roughly thirty minutes in, when he was interrupted by his campaign manger who attempted to convince him to go to the hospital, but Roosevelt waved him off. Only when the speech had been given in its entirety did he finally agree to go to the hospital. There, it was revealed that the bullet had lodged itself in one of his ribs and that it did not have a chance of shifting into his lungs, leading the doctors to determine that it would be safer to leave it where it was. After one week of recovery, Roosevelt was back on the campaign trail, with just over two weeks left until the election. Unfortunately, the bitter divide in the Republican Party cost not only Taft the election, but himself as well. Had one or the other run without opposition from the other, the Republican Party may have prevailed. While Taft and Roosevelt received over fifty percent of the popular vote when combined, the Democratic candidate, Woodrow Wilson, carried forty states and won in the electoral college in a landslide, 435 to 96, combined, which may in part be due to the fact that Roosevelt was running as a third party candidate. Even though Roosevelt did not win, he had come in second place, ahead of Taft. This was the first, and only, time in American history that a third party has done as well as Roosevelt did in this election, which demonstrated just how dominate he was on the political stage. Furthermore, his larger than life personality is displayed when later asked about how he remained calm enough to deliver his speech after having been shot, let alone one of its length, Roosevelt simply stated that he had been expecting it for a while, so he wasn’t surprised, and, “In the very unlikely event of the wound being mortal I wished to die with my boots on.”10