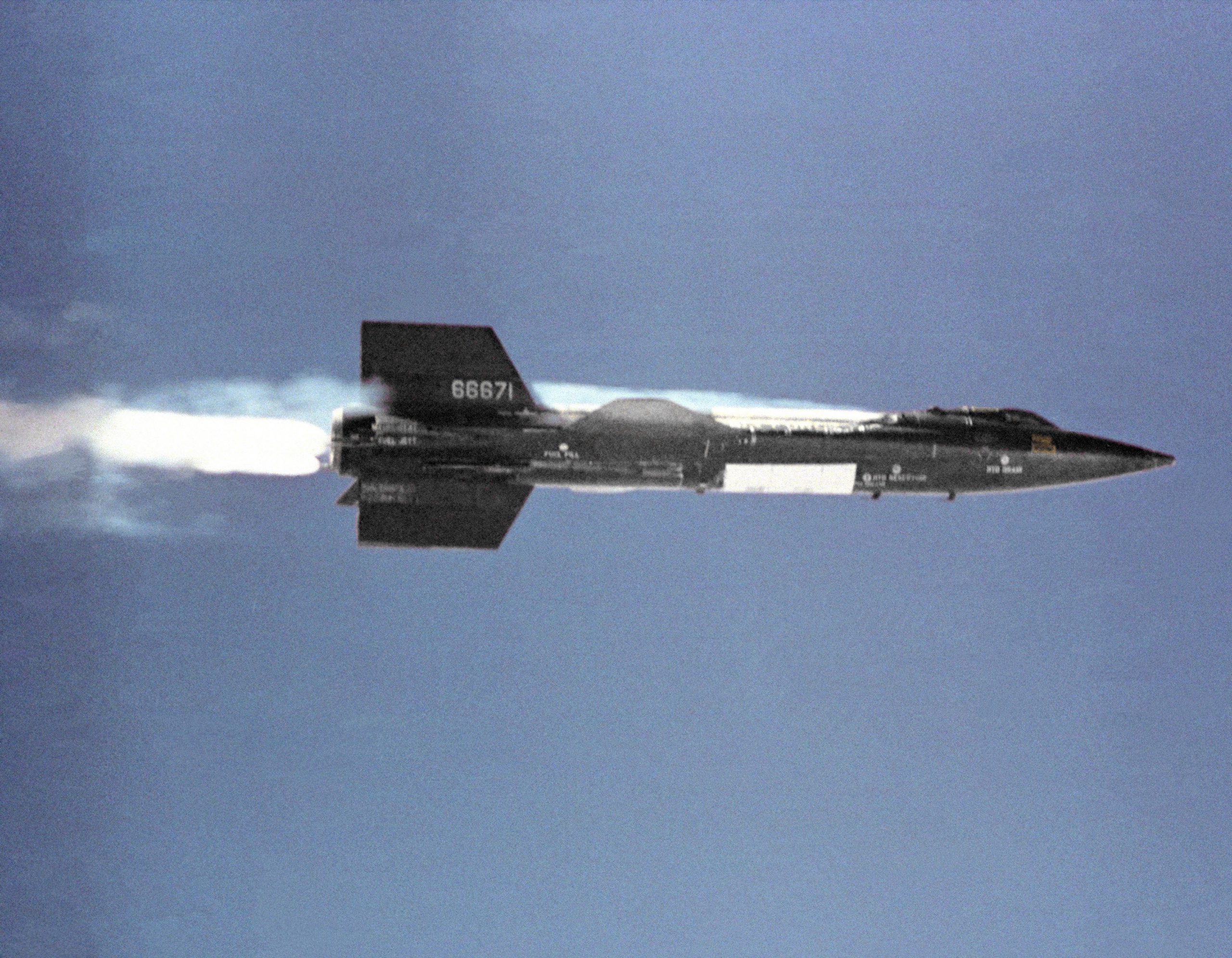 On April 20, 1962, Neil Armstrong, wearing a bulky and cumbersome space suit, sat in the ejection seat of a dart-shaped aircraft. Looking out the aircraft’s window, he viewed the massive B-52 mothership carrying his aircraft over Mud Dry Lake, Nevada, at 45,000 feet. As the launch countdown hit zero, the aircraft was released, and began a steady glide toward the desert. Igniting the aircraft’s engine, Armstrong experienced the full power of 57,000 pounds of thrust as he was pressed into his seat. Pulling back on the stick, he accelerated to the hypersonic speed of Mach 5.31, which is over five times the speed of sound. After 82 seconds, the engine expended all its fuel, propelling Armstrong to an altitude of 207,500 feet (over 39 miles above the earth). As he re-entered the earth’s atmosphere, Armstrong pitched the nose of the aircraft up to test the aircraft’s new MH-93 Adaptive Control System, partially of his own design. During this maneuver, the control system’s g limiter malfunctioned, which was supposed to limit the aircraft from exceeding 5 g’s of acceleration. Armstrong kept performing this maneuver as he re-entered the earth’s atmosphere, but the g limiter never kicked in. This caused the aircraft to skip across the edge of the atmosphere and overshoot the landing strip at Edwards Air Force Base at over three times the speed of sound! Armstrong found himself approaching Pasadena, California, but was determined to land at Edwards just 40 miles away. He turned the aircraft around, and on the way to Edwards, chase planes escorted Armstrong as the aircraft glided onto the runway for a successful landing.1

Armstrong, along with other test pilots, pioneered the first era of hypersonic flight years before the development of the Mercury, Gemini, or Apollo space programs. To achieve such a feat only years after humanity broke the sound barrier was another accomplishment altogether. Many new technologies had to be developed before test pilots like Neil Armstrong could set foot on the moon. The experimental aircraft that enabled this technological progress was known as the X-15.

After the earlier successes of the X-1 and X-2 research aircraft, the National Advisory Committee for Aeronautics (the government agency that would later become the National Aeronautics and Space Administration in 1958) began studying the feasibility of a new manned hypersonic aircraft in 1954. In these preliminary studies, two basic designs were theorized. One would use aluminium or stainless steel along with a layer of insulation, and another would use an unknown material to create a hot-structure where no attempts at thermal protection would be made. Research found that the aircraft would experience temperatures over 2,000 degrees Fahrenheit on the lower surface of the wing. This temperature requirement created challenges with both designs. Analysis found that an insulated aircraft could experience heat damage along its leading edges, which could create a serious hazard. The second design had its own problems since materials typically used in the aerospace industry, such as stainless steel and aluminum, could only withstand 1,200 degrees Fahrenheit but not the 2,000 degrees required for hypersonic flight. A few months later, analysis began on a possible material for a hot-structure design: Inconel X. This nickel-chromium alloy possessed a rare combination of high strength and the ability to withstand hot temperatures. Because of the temperatures it would experience during hypersonic flight, heat management would be crucial to the success of the X-15.2

One area of concern during the X-15’s development was flight control as the plane reached the edge of space. At high altitudes, aerodynamic control surfaces become useless, since there is little to no air passing through an aircraft’s wings. Since the X-15 was the first aircraft designed to reach such altitudes, research was conducted on jet controls, also known as Reaction Control Systems. These were a series of gas nozzles that released propellant to control the aircraft. These enabled the pilot to adjust the pitch, roll, and yaw (or up, down, left and right orientation) of a spacecraft. In test flights, the X-15 would demonstrate the Reaction Control System working successfully. Many future spacecraft, such as the Mercury, Gemini, and Apollo capsules, would utilize similar Reaction Control Systems to adjust a spacecraft’s orientation.3

To break the hypersonic barrier (speeds above Mach 5 or 3,806 miles per hour), the X-15 would need an engine powerful enough to reach such high speeds. A company by the name of Reaction Motors was tasked with designing and constructing a revolutionary rocket engine: the XLR-99. Producing over 57,000 pounds of thrust, this power plant promised to be the first throttleable and restartable rocket engine ever tested. This ambitious task would, in many ways, threaten the entire X-15 program. Reaction Motors struggled to meet deadlines, and cost overruns for development doubled from 15 million to 34 million dollars. Reaction Motors simply couldn’t meet NASA’s expectations in such a short period of time.4

Another disaster that threatened the program was an XLR-99 engine test that almost killed test pilot Scott Crossfield. NASA engineers secured an X-15 onto a ground test stand, leaving a four foot diameter hole at the rear of the aircraft to allow exhaust gases to exit the XLR-99. Scott Crossfield, not planning to fly that day, entered the X-15’s cockpit wearing formal business attire in lieu of his protective gear as other technicians entered a concrete shelter to protect themselves. He started the engine and throttled up to 100 percent thrust. Since the test was to see if the engine would restart, Crossfield shut down the engine, performed a restart, and throttled the XLR-99 up to 50 percent. As he did this, a safety system automatically shut down the engine, and Crossfield called out “Malfunction. Throttle off.” Attempting to restart the engine once again, he moved his hand toward the cockpit’s instrument panel and called out “Reset.” The moment he did so, the X-15 exploded. Crossfield, inside the fuselage of the X-15, was thrown twenty feet forward with a force of 50 g’s (fifty times the force of gravity) as the aft section of the aircraft was completely destroyed. Engineers at NASA would discover that the XLR-99 was not the cause of the accident, but was instead caused by a pressure relief valve for the aircraft’s ammonia fuel tank. Scott Crossfield would later recall that “It was the biggest bang I had ever heard. It was like being in the Sun.”5 Since the XLR-99 was behind schedule and its plumbing almost killed a test pilot, NASA decided that the first flights of the X-15 would utilize eight less powerful XLR-11 rocket engines until the XLR-99 was ready. Although there were many problems in its development, the innovation that went into the XLR-99 can be found in future space programs, such as the Space Shuttle Main Engines, and other throttleable, restartable rockets.

As NASA began flying the first two X-15 aircraft, engineers began to design improvements for the third aircraft that would be built: the X-15-3. One of its features, which Neil Armstrong himself helped create, was the MH-93 Adaptive Control System. One problem with the first two aircrafts was that the pilot had to use three joysticks for course adjustment. Two of these joysticks would adjust the aerodynamic or reaction controls separately, and the third joystick adjusted the X-15’s aerodynamic controls to a higher sensitivity for high-G flight.6 The control system would combine these three separate joysticks into one, blending the aerodynamic and reaction controls into a single system. This would give a test pilot desirable handling qualities at all altitudes. This significant advance in technology would pave the way toward fly-by-wire systems, which use computers to adjust flight characteristics from pilot inputs, that are incorporated into aircraft and automobiles today.7

As the X-15 proved itself capable of hypersonic flight in the X-15-3, NASA searched for ways to make the aircraft even faster. In March 1963, North American began modifying the second aircraft, which was renamed the X-15A-2. Improvements included an extended fuselage, external tanks, and a thermal coating to protect the aircraft from hotter temperatures. On October 3, 1967, test pilot Pete Knight flew the X-15A-2 to Mach 6.70 (4,520 mph) at 102,700 feet.8 This was a new winged vehicle speed record that would stand until the return of Space Shuttle Columbia in 1981. Upon landing, flight inspection revealed that the aircraft was charred from heat sustained from such high speeds and that many leading edges were damaged. Furthermore, the heat caused a dummy ramjet (an experimental supersonic engine) to melt off the aircraft, which was later found destroyed in the Nevada desert. In all, the thermal coating failed to protect the X-15A-2 from the heat sustained in this record-breaking flight. Although thermal coatings would never be used again, this test flight would lead to the invention of ceramic tiles that would play an essential role in protecting the Space Shuttle from heat upon reentry.9

Over the nine years the X-15 program was active, many innovations were made that would leave an impact on the aerospace industry. During these nine years, the X-15 broke new records and enabled the United States to compete in the Space Race. Many of the technicians, test pilots, and engineers who worked in the program would go on to serve in the Mercury, Gemini, and Apollo space programs. Future aircraft, such as NASA’s Space Shuttle, can trace its throttleable main engines, reaction control system, and ceramic tiles to the lessons learned in the X-15 Program. Although no longer in service, the X-15’s legacy will continue to enable future innovation in aviation technology.

I’m an Eagle Scout, Trumpet Player, Gamer, and a Mechanical Engineering Student from San Antonio, Texas. My passion is all things aerospace, and one day I hope to become an Aerospace Engineer. In my free time I enjoy volunteering in scouting, playing music, or gaming with friends. I look forward to graduating from St. Mary’s University in May 2023 to help create the next SR-71, F-22, or X-15.