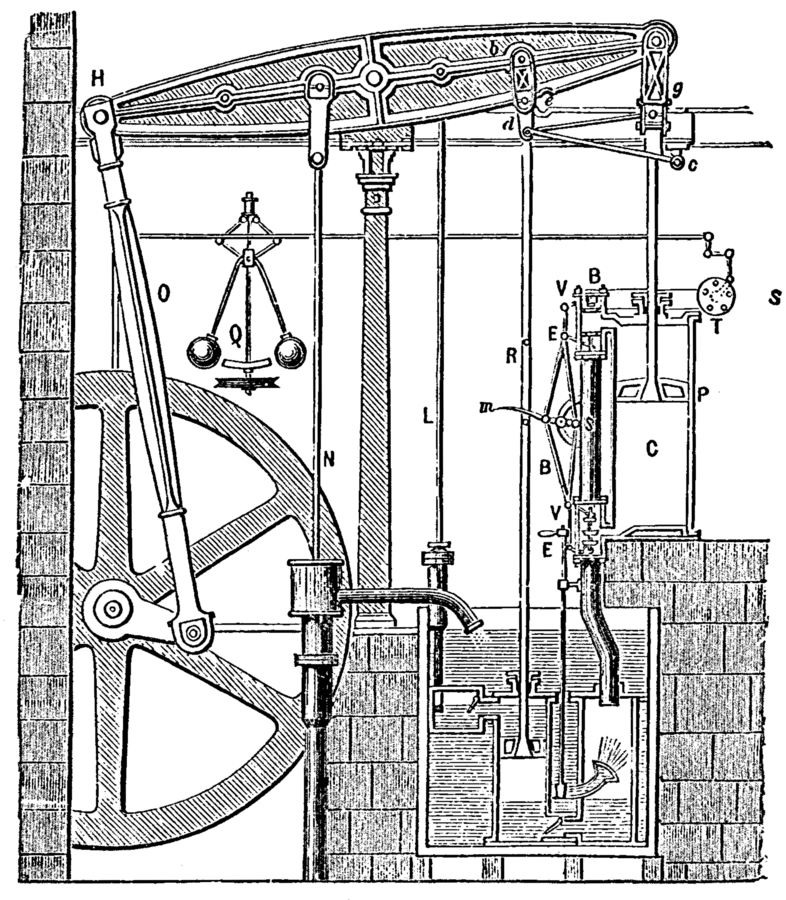 James Watt was born on January 30, 1736, and he always had an interest in creating and innovating new things. At the age of seventeen years old, Watt had decided what he wanted to do with his life. He wanted to become a mathematical instrument maker.1 To make that happen, Watt needed to travel to Glasgow where he would fulfill his goal. Watt traveled to Glasgow, where he then worked at the University of Glasgow as a mathematical instrument maker. Later in life, in the year 1755, he traveled to London where he met his master to train him in mathematical practices, design, and building. It wasn’t until 1765 that he began one of his most successful accomplishments in his life: creating the most efficient steam engine anybody had ever seen.

One afternoon in the year 1764, Watt had been repairing a model of the Newcomen steam engine originally made by Thomas Newcomen in the year 1712. He had been given this model by an organization that used these steam engines to pump water out of coal mines to make it easier to mine. At the time, steam engines were one of the most powerful pieces of machinery used in the mines. The steam engine was used to provide mechanical power by using steam created by the engine. Workers would fill up a boiler with water, and a fire would then heat the boiler making steam. The steam would be transferred from the boiler to the cylinder through a pipe causing a piston to move up and down creating energy. This energy was spread throughout the mining sites to power other equipment and mainly pump water. Watt had finished repairing the steam engine and decided to put it to the test. While testing his newly repaired steam engine, Watt realized that more than a quarter of the steam created by the engine was being released and wasted, causing it to be inefficient when used in the work field. Watt knew his desire to innovate would lead him to improve this steam engine.  Watt then spent the next year on the problem causing the loss of steam while using the engine. After that year’s long work, Watt realized that the problem of the steam engine was the loss of latent heat. Realizing this, Watt remembered the many different scientists he met, one being Joseph Black. Black was a British chemist and physicist who was the first to develop the concept of latent heat. Watt had first learned about this concept from Joseph Black himself while working at the University of Glasgow. It wasn’t until May of 1765 that Watt finally figured out a solution. Watt realized that he could utilize one of his great inventions known as a separate condenser.2 The separate condenser was made by Watt in 1765, just in time to use on the steam engine he had been trying to improve. The separate condenser was essentially a condensation chamber where the steam was transferred to. With the condenser and the working cylinder being separate, the condensation occurred without a significant loss of heat from the cylinder, ultimately preventing the loss of large amounts of steam. Watt had figured out a solution, but there was still an issue on how Watt would apply the separate condenser to the steam engine. Once he had figured this out, another old friend he had met, John Roebuck, had pushed him to make a small test engine. With loans from Joseph Black, Watt made a test engine. Within a couple of months, Watt transferred what he had done to the small prototype engine to the real steam engine. Even though Watt had fixed the initial issue, he was nowhere near done. He continued to improve the design of the engine by adding rotary motion. In doing this, it would eventually broaden the uses of the steam engine. Watt wanted to continue improving his design but had multiple financial setbacks while trying to do so.3

Watt’s innovation wasn’t too well known until he met industrialist Matthew Boulton. It was 1768 when Boulton came to Watt because he needed something to power his factory, specifically Watt’s improved steam engine. Watt agreed, knowing Boulton’s financial state, and over time they became friends and a team. With Boulton’s financial contributions, Watt improved his steam engine. With the help of Boulton, he was able to create a steam engine with two separate condensers making it extremely efficient for its time. In time, Watt and Boulton continued to work together. Soon Boulton had gained a share of Watt’s patent on the steam engine.4 This ultimately led to Watt and Boulton’s relocation to the United Kingdom, specifically to Birmingham. Watt and Boulton founded their new company known as Boulton and Watt in the year 1775. This was an early British engineering and manufacturing firm mainly in the business of designing stationary steam engines.5 With the start of this company, it had become a major driving force for the industrial revolution.6 Over time, steam engines were being produced, and they were becoming easier to obtain by companies. Soon, multiple companies had gotten their hands on the improved steam engine and were eager to test it. Once the steam engine was known as a successful piece of equipment to power other machinery, factories all around soon invested in them and started using them in their factories. With the steam engine being so efficient, companies started to invest because it made the production of manufactured goods quicker and more efficient. With that, more and more companies started to rise and run with the new industrialized businesses. With the steam engine being so successful more companies and factories started to emerge, leading to more industrial plants producing goods. Once these factories started to emerge, the industrial revolution had taken off. All over England, factories used the steam engine to power machines, such as the spinning mule and the power loom.7

Boulton and Watt successfully ran for over one hundred years. After Watt and Boulton’s passing, the company was successfully run by both of their sons. Eventually, in 1895, Bolton and Watt was forced to shut down as it could not be run anymore. Watt’s contributions to the industrial revolution in the form of the steam engine will never go unnoticed. With the help of multiple inventors, Watt created the most successful and efficient steam engine of its time. Watt’s steam engine played a key role in the development of the modern world and may go down as one of the most significant technological artifacts to ever be made.

This was the most informative article I have read so far. I knew nothing about the history of the steam engine or how important it was in history. It was sad that their sons weren’t able to keep the business running but the advances in technology that this business created changed history.

I had never heard about Watt’s crucial improvement of the steam engine. It sounds like he was an amazingly creative man, willing to discover and question, to create and contradict. His life seems happy and exciting, and he also seems very focused in studying. I would have liked to have more details on the financial problems Watt faced, I felt somewhat disconnected from the character.

This article was interesting to read a I feel like I learned a lot about steam engines and how they work. In high school I learned about the Industrial Revolution but I don’t recall learning about this and how this started the revolution. I think it’s really cool that this idea led to a world changing revolution and its amazing that they were able too keep the company alive for more than 100 years.

I enjoyed learning about James Watt and the steam engine. I think that it is impressive that the creativity and intelligence of one man can make enormous contributions to the world. Watts improvement of the steam engine brought the industrialization period, thanks to Watts contribution in technology the world started to change.

I remember learning about John Watts and the steam engine back in 10th grade. I always just found him so astonishing, how he was so ahead of his time. Creating the steam engine became the foundation of the industrial revolution, which made a giant contribution in the 18th century and in present time as well. Thanks to the engine, technology greatly evolved and we are able to mass produce just about everything.

I learned about John Watts in high school. He was definitely ahead of his time with the steam engine. That was the kickstart to the industrial revolution, and it greatly impacted the 18th century up to todays date. Technology was not the same after this invention. Since then, we have evolved as a species, and we can thank John Watts.

It is always interesting to learn about innovation, but it is also nice to learn what it is being adapted for. This article shows that expanding knowledge to fit a problem can lead to the betterment of society. I also noticed that it seemed easier for him to improve the engine by himself, nowadays it would be extremely difficult to due that on ones own, this is because we are starting to reach a point where it takes more time to get the same amount of improvement.

In all honesty, the name of John Watt familiar but i did not know anything about him or his inventions in detail till the article. His invention of the steam engine was the embodiment of the industrial revolution. This creation improved the transition time of technology during that period but also had contributions to modern society. Watts mind and innovation was before his time.

I remember learning this in 8th grade and the affects it had on the world. One idea can make the whole world turn upside down. This is a great idea that made many things much easier. All it took was some learning and other outside ideas to bring something amazing together. This really helped develop much of the US and it’s these ideas and visions that change the world.

While I had heard of the name James Watts, I did not know where my initial knowledge of the name came from. It is incredibly interesting to see not only the invention of a piece of technology designed to assist an already revolutionary invention but the inclusion of the improvement of the said invention in its entirety. The story presented is one that stands out because Watts didn’t invent the steam engine, but made another one in his way, and that improvement goes to show that everything can be improved upon to a certain degree.