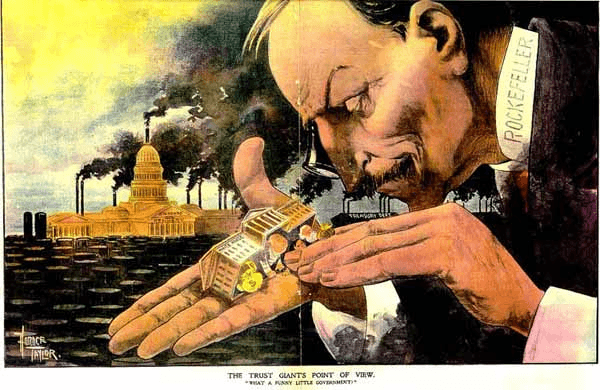 The name Rockefeller is synonymous with monuments and centers in such cities as New York and Cleveland.1 It is also the name that is associated with one of the richest families in America and one of the richest men ever to have lived. However, John D. Rockefeller was also one of the most vilified men of his era due to how he came upon his wealth. Whether it was through inauspicious practices or law evasion, Rockefeller became one of the most disliked Robber Barons of his time. His tussles with the media, and specifically with Ida Tarbell, also aided in this negative perception. That perception began to change as time went on, as he became a major philanthropist in the early 1900s. This charitable work in his later years helped improve his public image as time went on and even after his death in 1937.

The public’s perception of Rockefeller during the mid to late 1800s was that he was a Robber Baron as well as a morally compromised man. Ida Tarbell was one of the leading muckrakers of the Progressive Era, who dedicated herself to uncovering the truth about Rockefeller. She helped in exposing a side of John Rockefeller’s identity, which was that of a shrewd businessman who would often seek advantages through unfair means. In addition, she stated that Rockefeller’s philanthropy was tainted due to the immoral means he employed in his acquisition of wealth.2  Although some of Ida Tarbell’s criticisms of Rockefeller came out of spite as well as fact, there was no denying the influence she had in creating the public’s perception of Rockefeller. One result of her exposé was the U.S. Supreme Court’s decision to use the Sherman Antitrust Act to break up Rockefeller’s Standard Oil Company.3 Thus, one of the richest and most powerful companies in the world was severely crippled.

John Rockefeller’s identity had been tainted, and his company had been broken. Rockefeller was still very wealthy, but he did not necessarily know what to do with all his wealth. Thus, he became involved in his community as a philanthropist. Rockefeller devoted a portion of his money to charity, and he established a variety of institutions to help others. Rockefeller helped establish the University of Chicago and placed William Rainey Harper, someone he trusted, to lead the University. Additionally, Rockefeller always made it a point to give whenever he could to the University.4

Therefore, there is a contradiction when it comes to Rockefeller. How could such a Robber Baron be so generous when his life’s work had been to acquire as much wealth as possible? In addition, Rockefeller was also portrayed as a man who loved his children and taught them the value of money, while going to church regularly.5 But the John Rockefeller that was described by Ida Tarbell was of a man with a dual personality.6 In conclusion, many will call Rockefeller a Robber Baron for the underhanded tactics he employed, and who therefore cannot be absolved of these activities. Some will say that his philanthropic works, charity to churches, and personal character more than overshadow his past transgressions. What can be for certain is that the debate over whether John Davison Rockefeller Sr. should be viewed as a friend or fiend will continue for years to come.

Rockefeller had a ring to it, I knew I have hear of the name but I was never informed on his achievements, such as creating on of the most successful companies during his time, and his philanthropic work was truly inspiring to me because not many people were to fond of his wealth, but despite what others thought of him he was successful and they were not.

This article was short but informative on the views of a certain critic of Rockefeller. I seems that she was out vilify him for reasons that were unknown. Whether he was the man that she described in her writings or the wealthy man who gave away a lot of wealth to charity that we have a heard about. One thing we as true he did more good with his wealth then evil as the critic Ida Tarbell’s would have like us to believe. The article didn’t talk a lot about how Rockefeller gained his wealth, and a lot don’t know that he was one of the men who stated the oil alliance with the middle eastern countries or how he even knew where the oil was in the middle east. He discovered there was oil in areas of the middle east through his study of the bible and mention of different products to building he build. Those products that were mentioned only showed up where there was oil present. He was a self made man. I think people with always try to hold back and stop progression through the bashing of the persons character, like what Ida Tarbell was doing at that time. Never the less, Rockefeller will always be remembered as one of the most wealthly men to ever live and one of the greatest philanthropists in American history.

I liked the featured image and title you chose: it’s creepy yet intriguing and made me click on your article. I enjoyed reading your article and thought it was short and to the point. If Rockefeller was this money and power hungry guy then it makes me wonder why he would even bother with his philanthropic work. It’s possible that he began to donate a portion of his money to charity and establish institutions in an effort to clean up his tainted image. It’s also possible that maybe he changed and just genuinely wanted to help others but the timing of it is kinda suspicious. Either way no way can deny he was a successful man even though the way he got his wealth and power corrupted his morality.

Very interesting article, it really raised questions on John Rockefeller as a person. I think that he was a great businessman and really revolutionized how we live. He was key in kerosene and gasoline production paving the way for the standardization of the automobile and many modern privileges that we enjoy and take for granted now. I definitely think that it was devastating what happened to his company when an overreach in governmental powers occurred to interrupt the business of a hardworking individual. Aside from his business, he was a great philanthropist, as shown in the article, but, he really paved a path for other philanthropists to found centers and universities, such as how Andrew Carnegie founded Carnegie Hall and Carnegie-Mellon University.

I really liked how the diction of this article fit the time period of Rokckefeller. For example, “tussles with the media,” “muckrakers” and “Robber Baron” seem like the kind of phrases I would hear in a conversation I would be having in the 1800s. I’m always one to want to take a look at a person’s entire history rather than focusing on either the bad or good, which made me appreciate this article even more.

It was interesting to read this article about the John D. Rockefeller, Otherwise familiar with a few things about him I was not familiar with the view of him possessing a dual personality. Comparing Rockefeller to other modern-day millionaires or billionaires, it is interesting to note that several have been accused of having ulterior motives. At times instead of someone being viewed as merely making donations, those same good deeds may often be questioned out of spite and or jealousy. In the end, everything a person does can usually be viewed as good or bad depending upon the person and their own perspective.

I had grown up with the main idea and perception of John Rockefeller as a robber baron who was out to make money any way possible. I had never really heard of the other side of the man that was focused on giving back to the community. This was new information and I will need to look at how I view Rockefeller as a person again, as I have only heard on side of him.

I can’t agree with the general assessment of Rockefeller in this article, nor the willingness of its readers to appraise him favorably thus. His rapaciousness, and lust for power and control, belie his “philanthropies.” He funded birth control efforts; i.e., abortion, targeting the weakest of the weak, and in contrast to the mercies he ought to have learned from the bible. He also funded eugenics programs, i.e., the sterilization of those deemed intellectually, racially, and physiologically unfit.

Reading about Rockefeller it is interesting to see both sides of the story as well as people on both sides of the court decision. In my opinion I believe that he worked hard to get where he was and should not have had his company broken up. But what he did with his money afterwards was give back to the community that helped him so he was a good person.

The founder of Standard Oil is obviously one of the most intriguing businessmen who ever lived. I read somewhere that compensating for inflation in the year 1990 that John D. Senior would be the richest man who had ever lived. I believe I read he left behind a one billion dollar estate in 1937, and at least one third of that to charity. This of course is only one side of the robber baron. It’s also true that he created Standard Oil by overly shrewd business deals and finding ways to bankrupt his rivals.