King Sejong the Great: The Mastermind Behind the “People’s Script” 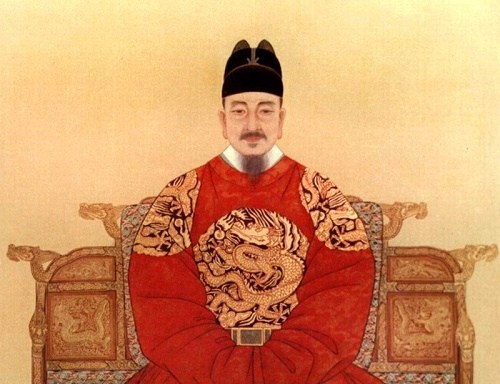 During the first half of the fifteenth century, Korea made a wide range of intellectual and technological advances that are not found in other parts of the world. It is named the “Golden Age” of Korea. This was the result of a king full of enlightenment and compassion who led his people out of poverty, ignorance, and injustice through the adoption of a new script that would become one of the most significant developments in linguistic history.

King Sejong was born on May 15, 1397. He was the third son to King Taejong; who was part of the Chosun dynasty (1392-1910). King Sejong was not the next in line to the throne but was chosen for the role due to his intelligence and studiousness. Again, Sejong’s reign is recognized as Korea’s “Golden Age.” His reign is known for improving prisons, agricultural technology, and exposing his people to the arts, regardless of social standings/education levels.1 But one problem arises; most of the population are illiterate.

He decided to create the Korean alphabet in 1446, originally called hunminjongum, meaning “the correct sounds for the instruction of the people.” Efforts to create the Hangul letters were based on the king’s understanding of phonetic theory and Chinese cosmology, since Chinese influence was extremely prevalent in their studies, and those studies gave him a head start in his creation. The original script consisted of twenty-eight letters: seventeen consonants and eleven vowels (now twenty-four letters; fourteen consonants and ten vowels). 2

Throughout the making of the script, King Sejong and his scholars kept in mind that most of its population was illiterate, and therefore had to come up with a script that would be easy to understand and accessible to its people. That it is why the forming of each letter is created based on how it is to be pronounced while also being supported by Daoist beliefs that heaven, earth, and humanity are the three most fundamental features in the universe. According to Hyo Sang Lee, “The consonant letters for k (or g), n, s (or sh), m, and ng are designed after the shape of the speech organs when they are pronounced.”3 For example, the consonant m is pronounced with the mouth, therefore, the corresponding letter is shaped like a mouth. The other consonant letters are made by adding a stroke or two to these or by extending the initial forms. These extensions help create the rest of the consonants. Now as for the vowels, these are designed after the round shape of heaven, the flat shape of the earth, and the vertical shape of a man standing.4 The true artistry of hunminjongum (now known as Hangul) is that it was created to be easier to write and understand. Examples of this include stacking and combining characters into groups of two to five to create syllables.5 This allows the syllables to be grouped from left to right to form words. This concept of writing was done to help the Korean people be introduced to literacy.

But King Sejong’s incredible script invention took years of development and continuous criticism. The new script was considered dishonorable since Mandarin was the spoken language of the elite. The main reason for this was that Korea’s politics and culture were strongly influenced by China and knowing the Chinese writing system was a privilege that separated the elite from the rest of the population.6 The creation of a new script was seen as barbaric and thus, discarding the Chinese script for a vernacular one was leading them to be seen as barbaric in China’s eyes. Even with its harsh criticism, King Sejong being the zealous man that he was, continued his creation. As a result, he sent one of his scholars to China (specifically to Liaotung, Manchuria) various times to consult with the Chinese phonologist Huang Tsan, in a time when travel in China was only possible on foot or by horseback, and he continued to study his script even in his declining health.7

But why was he so passionate about it? It is obvious that King Sejong hoped that a simpler writing system could provide mass literacy, improving the lives of his people. His response was “Because our language differs from the Chinese language, my poor people cannot express their thoughts in Chinese writing. In my pity for them, I create 28 letters, which all can easily learn and use in their daily lives.”8 When the script was finally released, it was welcomed with admiration and prestige. Chung Inji, director of the Royal Academy, who assisted the monarch in the project, said the following words, “[W]ith these letters, writings can be understood, legal appeals can be made, and melodies can be given verses. Even the sound of the wind, the cry of a crane, the flutter of a rooster, and the barking of a dog can all be written down.”9

It is important to understand that Hangul has left a huge legacy. While many other alphabets have been often borrowed and influenced by other languages, no other adaptation can compare to the Korean script as it has set a new type of cultural identity from other alphabets. But none of this would have been possible without the good judgment and compassion of a great king, who always looked out for the betterment of his people.

Mariana is an International and Global Studies major with a minor in Spanish (Class of 2024). Her current hobbies are participating in the music ministry and helping the community at her local parish. As a first-generation student, she plans to create opportunities for the less fortunate and expand awareness of different cultures that are often unseen by the rest of the public.
Author Portfolio Page