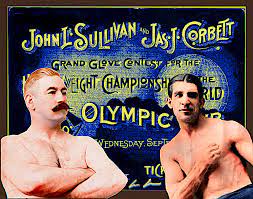 Imagine you are nearing 35 years old, overweight, and right out of jail, but nonetheless need to defend your championship belt and ego from a young and talented boxer coming for your spot. Would you coward away or would you build up enough courage to give him a run for his money? This was a decision that John L Sullivan was forced to make. After having an outstanding and historic career ending in both getting named the first Heavyweight Champion of the World and in getting arrested, Sullivan found himself as a heavy drinker, and his body gaining weight from not boxing for over three years. Over those three years, many people called him out and many critics came for his head; and after a while, that pressure built up until it busted. The pressure finally erupted after being presented with a fight with “Gentleman” Jim Corbett, a 26 year old boxer who came up through training and coaching, which we have not seen much of as back then while the streetlighting grit was more effective and has worked for Sullivan in his past.1

Sullivan came up in a gritty and challenging world that molded him to be a boxer before he was even a boxer. While growing up, it started with having many little scuffles that would eventually build up his drive for competition. He was taking many hard labor jobs that built up his strength, and from that he was tired of making small money and needed to step it up fast. He soon found out that bare-knuckle boxing was his calling, despite being presented an offer to play for his hometown Boston Red Sox. Given that opportunity and denying it, one must hope this illegal plan works out.2 Given that this sport was illegal, it came with a lot of money. So growing up poor heavily motivated Sullivan to bring in as much money as possible. It has even been recorded that Sullivan was calling out anyone who wanted to fight him for only $250. He also grew to have a lot of critics who wanted nothing but the downfall of his career, because he once turned down matches because he refused to fight a black boxer. While this grew his hate, it also grew his recognition. It is true when people say “any press is good press,” because this made his name grow a bit. Sullivan was a man who spoke his mind because, at this point, he was undefeated and nobody could put him in check for whatever he wanted to say. As this persona grew, so did his fanbase, leading to him receiving more fight offers and more money.2

With this newfound popularity, he was presented with a fight with Paddy Ryan, an Irish-American boxer who was thought of as the Champion. On February 7, 1882, they both got in the ring and Ryan left the ring with a broken jaw in the ninth round. Sullivan beat Ryan so hard that Ryan resigned from the sport and never returned to boxing. When people see someone beat the Champion that badly, people start talking. This was considered the turning point in Sullivan’s career, as his name was now on the map.2

Just as Sullivan’s career was taking off, his marriage was falling apart. He got a divorce from his wife and that did nothing but motivate him even more. He and four other boxers started a tour where they would call out anyone who wanted to fight for a small fee. He and his boxing friends traveled the world and ultimately won 195 fights in 238 days. Not only did this divorce motivate him, but it also kickstarted his drinking problem. His trainer said that keeping Sullivan off the liquor was the hardest part of training.5

Sullivan was soon presented with a fight of his lifetime. He was offered over $20,000 to fight Jake Kilrain. The only problem with this fight was that it was illegal. There were reportedly three thousand people in the audience. It was held in a secret venue, but due to the popularity of this match, the cops came, but they couldn’t do too much to stop the match. It has been said that even the local sheriff, W.J. Cowart, stopped and watched the fight himself. In 1889, Sullivan walked into that ring with confidence, and that showed when Sullivan took Kilrain for a 75 round ride in the ring. Sullivan even threw up in the 44th round because of how tiring this match was. By the end of the match, they could barely lift their arms to protect themselves and during the 75th round, Kilrain’s manager and coach threw in the towel. This crowned Sullivan as the official Heavyweight Champion of the world. While feeling on top of the world, the authorities came and arrested Sullivan, and that caused him to not fight for a whole three years. This was the last reported Bare Knuckle boxing match before the rules were changed to make boxing legal.6

Fast forward three years. Sullivan has not fought since beating Kilrain and he has been denying every opportunity to fight. Sullivan was tired of people asking him for fights; he was tired of the critics saying he either fell off or was too scared to get back in the ring. If Sullivan delayed this fight or did not respond, then he would be basically announcing his retirement. He was presented with a fight with “Gentleman” Jim Corbett, a young new boxer who brought a new training style with heavy coaching, which differed considerably from Sullivan’s way of just using his natural street-fighting style. This man had attended college and worked as a bank clerk prior to boxing, and that is how he got him name “Gentleman” Jim.

On September 7, 1892, Corbett and Sullivan got in the ring in New Orleans for the heavyweight title. At this point in Sullivan’s career, despite being undefeated, he was overweight, an alcoholic, and about 34 years old, compared to Corbett who was only 26 years old. Weighing about 25 pounds more than Corbett, Sullivan came with aggression. Corbett even said, “I allowed him to back me into all four corners, and he thought he was engineering all this, that it was his own work that was cornering me.” This showed that Sullivan came out the gate swinging and using up all his energy early on in the fight. Corbett’s plan was to wait until about the third round to tire Sullivan out and hit him while his guard was down. Corbett stating, “Wait a while! You’ll see a fight,” not only showing off his confidence but also trying to get into Sullivan’s head so that he would be thinking about what Corbett had planned out. During the fight, Corbett studied how Sullivan would choreograph his punches and could almost read his mind. That let Corbett know when and what would be thrown and how to counter it. Corbett saw the left hand coming, so he ducked and hit Sullivan with a heavy right hook, breaking his nose, and because it was so rare to see Sullivan hurt this badly, the crowd all rose to their feet, now chanting “Corbett.” This is where the momentum of the fight took a turn. As this fight went back and forth, during the twenty-first round, Corbett hit Sullivan with a left hand that would send Sullivan to the floor face first. This was a huge upset to the fans and was the first time anybody had ever seen Sullivan get knocked out in a fight. Soon after, the ref called the fight in a TKO and there was a new Heavyweight Champion of the World.7

After this match, Sullivan retired from the sport. And then, he had no reason or motivation to stop drinking, and that made it hard for his body to recover. Sullivan would dabble in theater and work many other jobs in his pastime. One big job was as a temperance lecturer. Knowing that Sullivan had overcame this case of alcohol abuse, he became a temperance lecturer so that he could help others also overcome their hardships. Quickly, Sullivan had already blown all of his $1 million he had earned from boxing and made it a point to lay off the liquor, making a change for the better for himself. While leaving an impact on boxing history for his gift, the sport left an impact on his body, because on February 2, 1918, Sullivan passed away from heart problems, most likely from his years of alcohol abuse.8

It’s incredible that Sullivan had the offer to play for the Red Sox, but he decided to not take that offer and chose a different path that he was interested in. Sullivan sounded like someone who had drive in life and wanted to accomplish big things. He wanted to choose the path that would provide the most money since growing up he didn’t have the privilege of a lot of money. It’s sad to hear that as driven and successful as he was at first he went down the wrong path and ended up in jail. Even after being in jail when he heard someone was coming after his title he still wanted to defend that title. This shows that despite what had happened he still had drive in his life to be the best.

The article was very informative, as it does a great job of presenting the career of John L Sullivan. It was interesting to see how Sullivan preferred fighting instead of playing baseball for his hometown team, the Boston Redsox. Before reading the article, I did not know that knuckle boxing was illegal and had to change their rules to make it legal, making it what we know now as boxing.