Kumari: The Living Goddess of Nepal 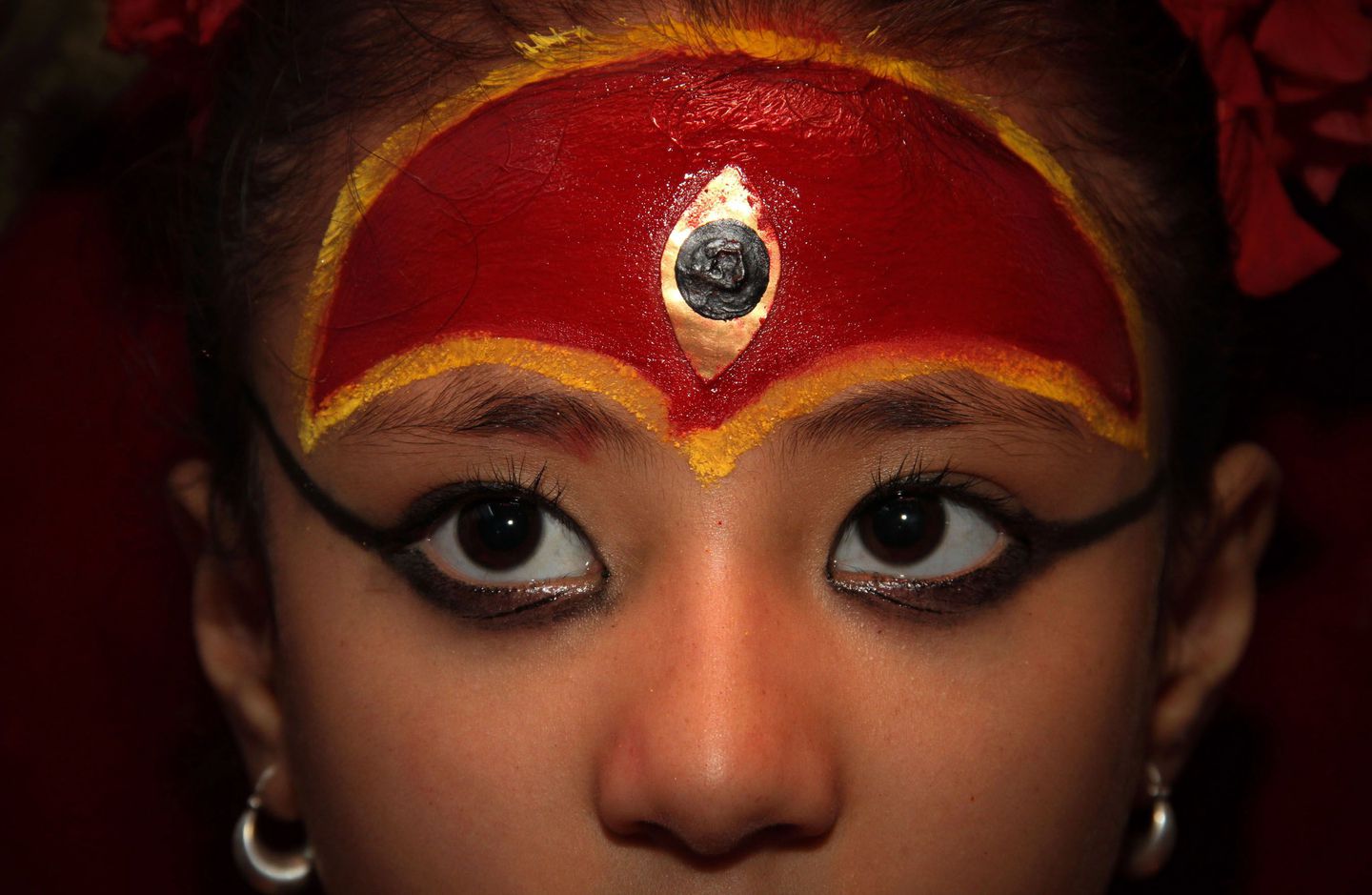 Best Article in the Category of “Religion”

In most religious traditions, god and goddesses exist only in the spiritual realm, and are worshiped and revered in various forms, from statues and paintings to symbols and faith. But, the case is different when it comes to the religious tradition of Nepal. There a tradition has developed of worshiping a young pre-pubescent girl as the display of divine Devi, simply goddess. Sounds interesting, right? A virgin girl from the age of three or four until her puberty is worshiped as Kumari, the Living Goddess. Simply put, Kumari literally translates to “virgin.” This word has come down from the Sanskrit word Kumarya, which means princess.1 Furthermore, the word Kumari is used in the Mahabharata and other early Hindu texts as an epithet of Durga, the great warrior goddess who vanquished the demon Mahisasura.2

Kumari is accompanied by attraction and appreciation. The Living Goddess is the survivor of a tradition that dates back more than two thousand years. And Nepal is probably the last place on earth where the supreme god is considered as a woman, where the god is a young girl. Before taking about the origin of the tradition, it’s worth explaining who this child is in the present day and where she comes from. Uniquely, the Kumari is worshiped by both Hindus—as the goddess Taleju—and by Buddhists—as the embodiment of the goddess Vajra Devi.3 The child herself is Buddhist, from the high-religious caste of Shakyas, goldsmiths of the Newar-community of Nepal. Kumari is dressed in red, because red is considered the color of gods and power among Hindus in Nepal. The Kumari wears a bright red jama (cloak) down to her feet, a red bhoto (shirt), and a red pagari (turban). She has a ‘tri-netra’ (third eye) painted on her forehead. The eye is metaphorical, and it is believed to destroy all the evil in the world.4 She also wears a bejeweled crown and is bedecked with gold snake necklaces and sacred amulets, and she gazes at the world enigmatically, never smiling. If she smiles at you—worshippers believe—it is an invitation to heaven, and you die.5

The Kumari’s red tika, which is placed on her forehead (above the third eye) artistically during festivals, is called bhrigu. It represents the cosmic energy of the earth. This brightest and most glowing tika is a sign of wealth, prosperity, and a bright future for the nation. The special tika is prepared by mixing vermilion powder, rock crystal powder, a kind of sweet scented natural powder called ‘kumkum,’ and sesame seed oil.6

The origin and development of this tradition is deeply rooted in Hindu understanding of deities. There are several stories telling how the current tradition of the Kumari began. The earliest scripted one is of King Jayaprakash Malla playing tripasa, a dice game with the goddess Taleju. Taleju was recognized as a form of the Goddess Durga. Taleju used to visit the king, with the condition that the king refrain from telling anyone about their meetings. One night when the king’s wife saw him with Taleju, she got furious and told the king that she would never return and, if he wanted to see her again or have her protect his country, a girl from the Shakya clan of the Newari community should be chosen, and then she would incarnate in her. Since then Jayaprakash Malla started this tradition.7

Similarly, the second myth of Kumari comes from the sixteenth century. King Trailokya Malla played tripasa with Taleju, and in the process, while discussing the welfare of the country, the king made sexual advances towards the goddess. Enraged, the goddess stopped visiting the palace. After the king begged for her forgiveness, the Goddess Taleju agreed to incarnate the body of a virgin girl from the Shakya community.8

How does the Kumari get chosen to be the incarnated goddess? When a new Living Goddess is called, several girls are forwarded for selection by their parents. The sacrifice of parting with a beloved child is conceived of as a matter of dharma (religious duty) done for the good of all sentient beings. The history says that the selection process is done by five senior Buddhist Bajarcharya priests called Pancha (five) Buddha. Every Newar has a horoscope drawn up at birth by an astrologer containing a hand-painted scroll of complex tables and diagrams. The horoscope of each candidate is checked for inauspicious or contrary signs. The Kumari should have no physical blemishes, such as scars or birthmarks, and should be healthy.

The final selection is carried out by priests behind closed doors at the Kumari Chen (House). The Kumari should exhibit the 32-lakshina (battis-lakshans, the thirty-two perfections of a goddess), the physical perfections of a bodhisattva, or enlightened being. She should have the chest of a lion, a neck like a conch shell, eyelashes like a cow, a body like a banyan tree, the thighs of a deer, a voice clear and soft as a duck. Once the Kumari is selected, she is confined to the Kumari Chen on Kathmandu’s Durbar Square until she hits her puberty. She leaves the building only to attend important religious functions, during which she is either carried or transported in a palanquin, a vast golden chariot. Her feet must never touch the ground.9

The Royal Kumari lives in a magnificent, intricately carved three-floored wooden and tile temple, where she performs her daily rituals. This temple, known as the Kumari Chhen or Kumari Ghar (Kumari House), is located on the southern end of Basantapur Durbar Square. The Kumari House is a favorite tourist spot; every day one can see enthusiastic foreigners and devotees flocking into the courtyard of the Kumari House. Non-Hindus are allowed to enter the premises, but not all can visit the Kumari.10

Kumari spends several hours each day upon her throne, receiving up to a dozen visitors. The movements of the goddess during offerings of the devotees are regarded as omens. There is a belief that, if she cries or laughs loudly, the worshipper is expected to become seriously ill or even die. If she weeps and rubs her eyes, the worshipper will die immediately. If she trembles, the person will go to jail; if she claps her hands they will have a cause to fear the King; if she picks at the food offered, the visitor will soon lose money. If none of the ominous signs appear, the worshipper’s wish will be fulfilled.11

There are only fifteen days a year when the Royal Kumari comes out from her temple for festivals. One of these is Kumari Jatra, part of the celebration of Indra Jatra (festival of Indra, the God of Rain). Devotion to Kumari is connected with this festival. During observance of Kumari, the cultural Newari dance is performed by artists wearing colorful dresses, masked in the images of deities with different traditional Newari musical instruments. The parade is conducted and Kumari is carried in a chariot throughout the city. The chariot is set on massive wheels, covered with gold plated copper sheeting, and culminating in a double roofed pagoda.12 Their sincere faith is revealed as they rush to offer their prayers and offering to Kumari, in hope of receiving grace from her.13

In medieval times, almost every town in the Kathmandu Valley had its own kumari. Many traditions have since disappeared, some only in the past few decades. The Patan Kumari is considered as the royal kumari who represents the ultimate living-goddess in the valley. Being chosen for the position is regarded as the highest honor. So despite the financial burden and sacrifices involved in maintaining a young girl as a Kumari, and the challenges of her rehabilitation once she reaches puberty and has to live a normal life again, certain families are still prepared to put their daughters forward for selection. To sum it up, Kumari lives among us and not just in the imagination, but also in reality.