The Battle of Thermopylae: Betrayed, Bloodied, and Besieged 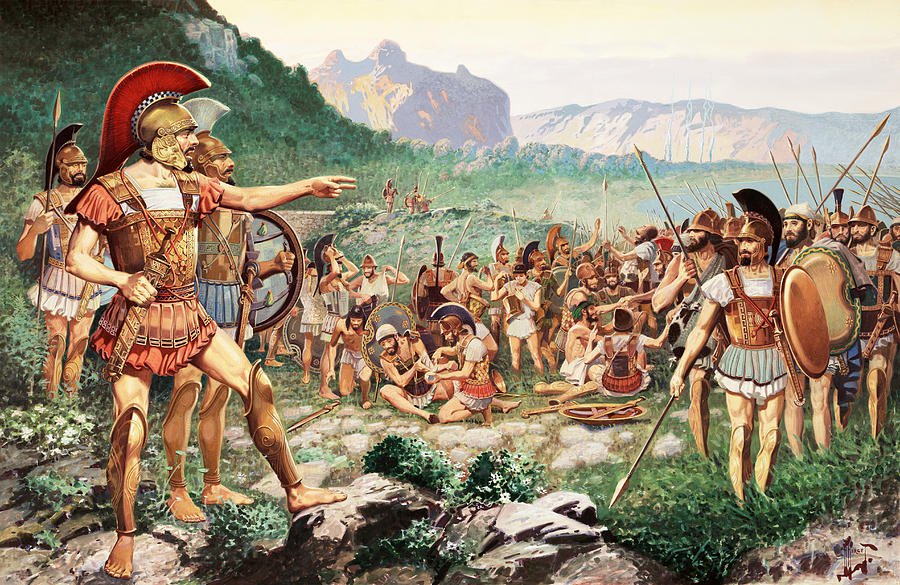 One by one the Greek and Persian forces continued to slaughter each other in combat as they battled for nearly three days. As the Spartan-led Greek forces relentlessly continued to combat the Persians, King Leonidas fell with sword in hand, finally receiving the glory he ultimately desired through combat. His death was not untimely, but rather expected, as Spartans knew they should never retreat from battle, even when faced with inevitable demise.1

The ancient songs of war were played and written by the Spartans themselves, a glorious bunch. These Spartan warriors, through time, still continue to intrigue and amaze us today. Many of us have seen, or at least have heard of, the movie 300, featuring the famed Spartan warriors being glamorized through Hollywood theatrics. But what was it even about? 300 wasn’t just a movie for the sake of being a movie, but rather something greater. It was about Greek history and the tenacity of the ancient Greek Spartans and their ability to engage and endure combat relentlessly. While war is something we see much of in the ancient world, there are few battles that hold up in history and withstand the test of time. One of the most notorious ones is The Battle of Thermopylae.

As told by the ancient Greek historian Herodotus, the tale of the Battle of Thermopylae is comprised of many themes, including honor, betrayal, courage, and loyalty to the Greek city-states. An invasion from the Persian Empire of Xerxes was taking place, and decisions needed to be made. At the request of the Athenian general and politician Themistocles, King Leonidas I of Sparta rose to lead his Spartan forces to battle against the Persian army. Xerxes’ forces were preparing to advance through the pass at Thermopylae, which was the last natural barrier defending the Greek mainland. As Leonidas and his men marched to Thermopylae, other Greek city-states contributed troops to the effort, including the Phocians, and they all met alongside with Spartan forces to form a joint force. By now the force was composed of approximately 7,000 men. Together, the Spartan-Greek alliance continued to set forth towards the coastal-adjacent passage of Thermopylae to help defend the Greek mainland from the invasion. Leonidas decided to take his men and the accompanying forces to the middle gate of the Thermopylae pass, where the Phocian people, who lived south of it, had previously constructed a wall in the pass to defend from such invasions. Scholars estimate the Persian forces to have consisted of around 120,000-300,000 men strong when they faced off with the Greek forces.2 The Greeks didn’t know how large the Persian army was, but they knew of their might. The reality for them was simple and objective: they would be fighting not only for themselves, but for everyone they loved back home. They may have been from different city-states, but at Thermopylae, they were one force united behind one cause.

It is said by Herodotus that earlier in the year, Leonidas and his fellow Spartans had met with the High Priestess, or Oracle, in the Temple of Apollo located in Delphi. Leonidas had only chosen Spartans with living sons to take with him to combat after this visit.3 This is our first clue that Leonidas knew that perhaps he would have to sacrifice his life through combat eventually. The Oracle is said to have prophesied the following:

O ye men who dwell in the streets of broad Lacedaemon!
Either your glorious town shall be sacked by the children of Perseus,
Or, in exchange, must all through the whole Laconian country
Mourn for the loss of a king, descendant of great Heracles.4

After the Greeks finally made it into Thermopylae, they established camp at the wall for what would be seven days total. When the Persian army was eventually visible across the Malian Gulf, the Greek forces held a council of war. Some men wanted to retreat and defend the Isthmus of Corinth, but the Phocians grew weary, knowing their land was just south of Thermopylae. They were right to worry, but they were also right, to an extent, to trust Leonidas when he eased their fears, assuring them that they would defend Thermopylae. Adding to the list of decisions to make, Leonidas eventually received word of a path that could be used by the Persians to outflank them. He decided to place 1,000 Phocians on the mountainside to rectify the possible danger, having no reason to believe they would not prove to be reliable.5 With everything to consider, Xerxes sent an emissary to negotiate with Leonidas, presenting fair terms of surrender. But why would a glory seeking warrior and his people submit to surrender, to the will of another? The answer was that he wouldn’t. Upon refusal of accepting the negotiation terms, Xerxes demanded they lay down their arms, but to no avail. Xerxes allowed four days of delay, only to his dismay.

It wasn’t until the fifth day that Xerxes had become angered and decided it was time to commence the battle.6 Xerxes sent a force of roughly 10,000 men, only to prove being incapable of breaking the Greek defense. The Greeks fought in front of the Phocian wall, shoulder to shoulder, taking advantage of the most narrow part of the pass and using the least amount of men as possible. It was then that Xerxes wanted to utilize his elite force known as the Immortals, but they too failed in their attempt to destroy the Greek lines. Xerxes’ military may have been large, but it was impossible to make use of those numbers when fighting in a the confined space. Leonidas continued to use the narrowness of the passage to their advantage, utilizing what is known as a feigning retreat by running away from the Persian line only to turn around quickly and slay troops chasing after them. The fact that the Immortals used spears shorter than the Greeks did not help them either, thus reducing their tactical and geographical advantage even more. Even with such conditions, Leonidas and his company still faced a possible flank. But Leonidas kept in mind where he had stationed the Phocians, to defend against that possibility.

Xerxes needed something to give him a new tactical edge, to make this a more decisive battle, a key to ensure victory. That key was none other than Ephialtes of Trachis. Ephialtes was of the Malian Greek tribe, whose land spanned around what is the present day Malian Gulf. Ephialtes believed that if he helped the Persian King, he would be rewarded. Upon the second day of combat, in one of the greatest Greek betrayals in the ancient world, Ephialtes showed Xerxes and his forces a path around south of Thermopylae to the Greeks’ position.7 Phocian forces were placed topside the mountain for this very reason, but they were unprepared and did not expect to be met with a force of the magnitude that came. While they fled to the top of the mountain, the Persian forces continued past as fast as they could. Leonidas, who had become aware of this dire situation had to make a choice. Flee, or stand and fight. He had personally ordered many of the Greek allies away, knowing they would be killed if they stayed, but knowing also that he and his Spartan troops could not retreat from a position they had come to defend. For warriors as noble as some of the ones who joined with him, the decision for some to stay was of high conscience and glory seeking. With many Greek forces retreating, Leonidas and the rest of his men became a rearguard defending their retreat. Leonidas and his men had to continue to hold the battle for as long as they could. Had he not stayed, this would have opened the passage further for Persian forces to run down the retreating Greeks easily. With Leonidas and his final warriors most likely making peace with the gods and themselves, Herodotus says:

Here they defended themselves to the last, those who still had swords using them, and the others resisting with their hands and teeth.8

The decision to stay and fight to the death has sparked debate ever since the famed Spartans sacrificed themselves through combat. Some have argued that the act was merely the battle creed of the Spartans to never retreat from their post, but others argue that it was a tactical decision to allow other men to retreat. Regardless of the objective truth that may lie behind the confusion is that with this defeat, the Spartans and company granted the other Greek city-states the much needed time to continue allocating other resources and time for the defense of Greece. Though the Second Persian Invasion was not to succeed, the Battle of Thermopylae showed that the Greeks were composed of fearsome warriors to be reckoned with in battle.