Louis Zamperini: The Man who Refused to be Broken 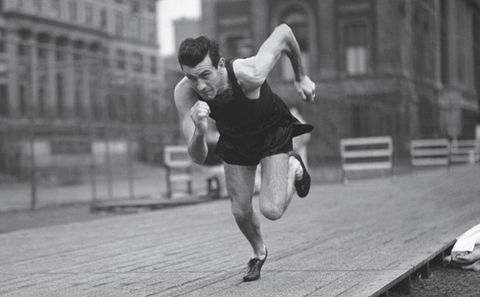 Louis Zamperini walked limply to the starting line as he was at the 1936 Berlin Olympics, moments away from taking part in a 5,000-meter race at the impressive age of nineteen. Boom! The starting gun went off as he began his stride to the middle of the surrounding runners. Louis was in the second group as he glanced to see where the two leaders of the race were. He wanted to make a move to the front but couldn’t as his body had felt heavy and stiff. As the pack of men began to thin out, Louis noticed he was in twelfth place. Tired, Louis began to remember how he got here and how his brother always told him, “A lifetime of glory is worth a moment of pain,” and with that he took off, passing multiple runners, and finished eighth place. Even without a medal, he left his mark on that track, running his last lap in 56 seconds.1

Louis Zamperini was a peculiar boy brought into the world January 26, 1917, in Olean, New York. His parents were Italian immigrants and were very young when they had Louis, and his older brother Pete. Louis was the odd man out as a kid. He was skinny and weak looking, and as an Italian during this time, he was bullied a lot for his ethnicity. He would get consistently beat up and taunted for his abnormalities, and simply decided to not weep or run during the torment. As he began his teens, his behavior began to become violent and mischievous. He would steal things, physically fight boys and girls, and messed with authority figures. His parents were at a loss for his corrupt behavior. When Louis found a passion for running, his life began to turn around. His brother was the first one to push Louis to train, but it was not until Louis started running for himself that he saw improvement. He would run miles and miles in his neighborhood and would build stamina by diving in the public pool and holding his breath until he could be underwater for up to four minutes. His training paid off when the track season began, and he was breaking mile times left and right every meet, each time coming in under five minutes. Louis was attracting attention from media such as Los Angeles Times, as he was known to be the fastest high school miler in American history. Louis’s next ambitious step was to make it to the 1936 Berlin Olympics; and he got to the final Olympic trials by running one of the fastest 5,000-meter race at the Compton Open in May of 1936. Through an intense race in Manhattan, with the weather exceeding 100 degrees, and bodies dropping mid-race due to heat exhaustion, Louis managed to win first place in a very close race with the claimed “unbeatable” Don Lash. This led to Zamperini going off to Germany to the 1936 Berlin Olympics as the youngest distance runner to qualify and make the team.2

In Louis’s later years, before he was about to turn eighty-one years of age, he decided to return to Japan to participate in the Olympic Torch for the Winter Olympics. Knowing that he was going to be near the prisoner of war camp where he was tortured, he decided to write a letter to “The Bird” revealing the affects that he had had on him and how he had forgiven him for all his faults. A meeting was attempted to be set up between Louis and “The Bird,” but Watanabe refused to see him and never replied to Louis’s letter, as no one knew if he had even read it at all. As eighty-one-year-old Louie raised the Olympic torch and began running past the place where he was imprisoned, beaten and humiliated, he was not fazed, for he had overcome the pain and suffering, replacing it with joy and forgiveness.10 Louis Zamperini died July 2, 2014 from pneumonia at the age of ninety-seven. Even with his death, he left a mark on the world with his impressive will to not let the trials of life defeat him. He continued to fight even when hope was lost, bringing life to his saying, “Don’t give up, don’t give in. There’s always an answer to everything.”11

Zamperini is a warrior. I can tell you right now if I was placed in any of the same conditions as him, I would be done. The resilience it takes to move from the fulfilling lifestyle of an Olympic athlete to a battle-hardened soldier is nothing short of motivational. From the forty days in the ocean, to the success as a runner, to the survival of the war camps, everything about Louise Zamperini is incredible.

Such strong and powerful determination from just one man. If I was in Zamperini ‘s position I highly doubt I would make it back alive. To not only be stuck at sea for 47 days but to also be captured and imprisoned in a torture camp is just a string of bad luck. Though he was able to push through it and continued to live, till the end he did not give up. This was a great article, definitely one of my new favorites.

This story is quite jaw dropping to read. Reading Louise’s challenges and back story of his achievements before the war is impressive. Him pursuing track after being in prison camps is shocking. His story is not one you hear everyday. He endured horrid treatment and still never gave up. He is motivational and empowering. Louis Zamperini is quite an inspiration.

Zamperini is a true warrior that was not going to give up any battles. He had such an amazing story that the article exemplified. The struggles and trials such as enlisting in the war, being captured overseas, and treated in harsh conditions. They people were hoping to see him fail, but he came out physically and mentally stronger than when he began this journey.

The life of Louis is astonishing. His performance in the Berlin Olympics is even more astonishing considering his age. I think the most interesting part of this story is how he overcame his PTSD and wrote “The Bird” a letter about how he forgave him. PTSD is something that is oddly enough not (I feel like) studied as much as it should be. Louise found a way to creat and sustain meaning in his life (religion), which is something that I feel that people who struggle with PTSD are missing (meaning, vocation, activities, etc).

This story is very inspiring. I read the book “Unbroken” several years ago and I was amazed by the courage and determination this guy had. I think that WW II is a prime examples of the abuses and violations of human rights. It shows all the mistreatments and violent acts against innocent people. Zamperini had to go through a whole lot in order to get through all the obstacles and challenges. However, his strong mentality and determination to live kept him motivated. I believe that his discipline of being a runner increased his mental toughness in many ways. I think that Zamperini is a hero in many ways and his story is just incredible to read about.

Louis Zamperini’s life was definitely one of hardship. Nevertheless, his story is one of inspiration. He faced so many challenges throughout his years yet was able to overcome them by giving his life to christ and learning to forgive. His journey of training and competing at the Olympics, being stranded at sea, to being held as a Japanese prisoner of war shows his undeniable strength. I found it interesting and empowering that he in fact wrote a letter to ‘The Bird’ forgiving him for all the mistreatment Zamperini endured while a prisoner.

This article was well-written in that it told the events of Louis Zamperini’s life in a triumphant manner. Zamperini was a remarkable individual who definitely overcame many obstacles to say the least. What struck out to me the most and served as an indicator of Zamperini’s character was his strength both physically and mentally to overcome his fears and fatigue and continue to hold that beam up without a flinch. What I found to be very heart-warming was that he was able to finally find peace within himself and managed to write a letter to “The Bird” to forgive him for all the pain he caused Zamperini while in the Japanese prison camp.

This was a captivating article that told the life of Louis Zamperini and his will to keep going despite life’s trials. I knew of this story from the movie Unbroken and after reading this article I am left amazed once again. He lived a long life full of moments of ups and downs but never gave up. Everything from him competing in the Olympics, being lost at sea for over forty days, and his experiences of torture at the prison war camps with additional inflicted pain of “The Bird” speak very highly to his will and strength to find peace his heart towards the end of life. Great article!

This man is so determined and strong. Louise was faced with so many trials and challenges but he stood tall and strong. It is crazy to hear about the malnourishment his body was put through and that he was in the ocean for over 40 days. I cannot imagine the physical and emotional pain that Louise went through. He is physically and mentally a very strong man. His story is one that many people hopefully will get the privilege to hear.