Luddites: Victims of the Industrial Revolution 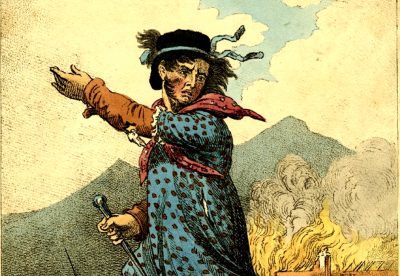 The early nineteenth century brought drastic change to manufacturing. As the Industrial Revolution moved into full swing, factories and industries boomed and there was a sharp increase in jobs.1 Although many people in England were adapting to this industrial lifestyle, one group, known as the Luddites, showed resistance to the movement toward the mechanization of labor. The Luddites tried to resolve this by demolishing these modern machines, but ended up dispersing after government intervention.

Prior to the Industrial Revolution, the production of things was largely controlled by guilds. Guilds were organizations comprised of skilled artisans who dedicated their entire lives to craftsmanship. It took great learning, skills, and experience for guild members to manufacture their products. Because these people had to learn the entire process of crafting goods like textiles, it was a process that required years of training. The Shearers Guild, for example, which labored at the process of finishing pieces of woolen textiles, were among some of the most prestigious guilds in England in the late eighteenth and early nineteenth centuries.2

When the Industrial Revolution took off, there were startling contrasts between the work of guilds and the kind of work taking place in the factories. Unlike guilds, factory owners hired unskilled and inexperienced people, commonly children and women, and had them attending to hazardous machines for long periods of time. As opposed to a single guild member working on the entire process of textile making, often with years of experience in such production, a factory worker merely attended to the needs of his or her machine, changing empty bobbins of thread or making sure the machine had plenty of raw cotton for its work. The rhythm of work within the guilds tended to be flexible and free in comparison with factory work. Factory workers, on the other hand, faced overwhelming numbers of rules, and were constantly monitored.3

Among those affected by the rise of factories were the guild workers, who saw factory labor as unacceptable. Various guilds protested in various regions. Guild workers living in the Midlands counties such as Nottinghamshire, Derbyshire, and Leicestershire, worked in crafts of lace making and framework-knitting. Those residing in Yorkshire tended to be woolen guild workers. Finally, those who lived around Manchester were members of the cotton weavers guild. In 1811, these guilds started to take matters into their own hands against the production of factory-made products by unskilled workers. These protesters began in the Nottinghamshire village of Arnold. They were from the framework-knitters guild, and they broke into shops in order to take away jack wires that were essential to wide knitting frames. The following month, the frames themselves were destroyed by the protesters, now calling themselves Luddites. Several factors that led to the protests involved the restriction of looms that a weaver could own, as well as the creation of “cheap shoddy material” from the wide stocking frames. Other protester began calling themselves Luddites as well, such as the cloth dressers in Yorkshire called croppers. Traditionally, the croppers used a fifty-pound handheld shear to cut the nap from woven woolen cloth. With the introduction of the gig mill, the croppers felt outdated and “threatened.” The gig mill had the ability to shear woolen cloth easier with little to no experience required. And so, in 1812, the Luddites smashed the equipment in the town shops and mills of Yorkshire. It should be noted that Luddites also took part in food rioting and advocating for political reformation.4

It made the Luddites furious to see society abandoning their old traditions in favor of quick and dirty methods of production. Disguising themselves, they initially started to demolish the textile machinery, blaming that machinery as the sole reason for the radical change of their entire way of life. They often attacked in the middle of the night, making sure that they only harmed machines. Their attacks would be reminiscent of modern-day environmental activists who sabotage construction equipment. The Luddites claimed to have a leader named Ned Ludd, otherwise known as King Ludd. But who exactly was this king? He was a supposed leader who may or may not have ever existed. Historians have long debated whether King Ludd was a real person or some imaginary figure made up by the Luddites.5 Whether or not Ned Ludd existed, the Luddites saw him as a figurehead.

The Luddite attacks originated in Nottingham, England, but they steadily spread to other surrounding cities.  As a result, the British government hired people to help protect the mill owner’s machinery. Things escalated in 1812 when a fight broke out between the Luddites and the guards, in which several Luddites were killed.6 Following the Luddites’ failed attempt to attack Rawfolds Mill, which resulted with the owner getting killed, the Luddite movement started to grow weak.7 Eventually, the government had to hang fourteen Luddites in 1813 to set an example to anyone else who might have considered rebelling. After that, any form of resistance from the Luddites stopped.8

As the Industrial Revolution grew exponentially, and factory labor prevailed, the way of life of the guilds gradually died out. With the introduction of mechanized production by machinery, cheap, unskilled labor came to dominate the production process in most industries. With state-of-the-art technology, who would want to go back to the slow, difficult process of production that the guilds had embraced? Ever since the British government’s intervention on behalf of the machine owners, the term Luddite has become a term of derision for those who would be ignorant obstructers of progress.