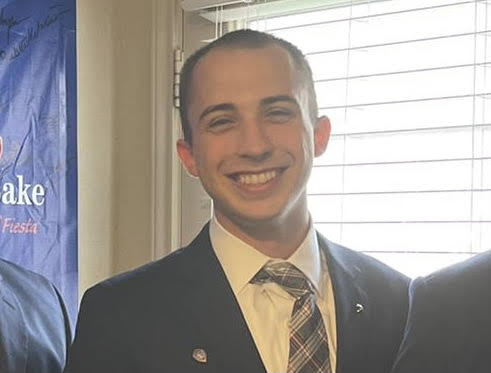 Imagine the western front during the spring of 1917. The sound of the whistleblowing indicated the start of an assault. Masses of soldiers crawled out of their trenches and into No Man’s Land. They rushed across the field full of mud, craters, and remnants of failed attacks from years of fighting. While the assault was going forward on land, a fierce battle raged in the sky amongst the angels of death. One of them dove down like a hawk and strafed the attacking force with machine gunfire. Flying in his trademark red triplane with the iron cross depicted on its wings and tail, was a legend respected and feared by both sides of the conflict. His name was Manfred Albrecht Freiherr von Richthofen, also known as the Red Baron. Richthofen was born into a noble Prussian household on the 2nd of May in 1892, becoming an experienced hunter and an accomplished equestrian in his early life. He also developed a reputation for being fearless and a daredevil. When he was ten, Richthofen climbed the highest steeple in Wahlstadt and tied his pocket-handkerchief to one of its lighting rods.1

Richthofen’s father enrolled him into the Prussian Cadet Corp at the Royal Military Academy of Lichterfelde at the age of eleven, and later he was commissioned as cavalry lieutenant and assigned to the First Uhlan Regiment.2 Later, he wrote about this experience in his journal, “I never was good at learning things. I did just enough work to pass. In my opinion, it would have been wrong to do more than was just sufficient, so I worked as little as possible.”3 Upon his graduation in 1912, Richthofen’s first assignment sent him to the Eastern Frontier. While there, the rumor spread that war was on the horizon. Several officers, including Richthofen, believed that the possibility of war was nil. That was not the case for long; the Kaiser ordered the attack on the Russian Front while Richthofen and a few other officers were lunching on oysters and champagne.4

Being a young cavalry officer, his job was to study the ground and harass the enemy. In August 1914, Richthofen rode at the head of his troops for the first time against the Russians at midnight and crossed into Russia with no resistance.5 They captured the small village of Kielzte by quietly arresting the village’s religious leader by locking him in the bell tower of the church. He and his troops held the village for a week, dispatching most of his riders to send messages to the central garrison. A group of Cossacks entered the village. Cossacks served the Russian Empire and were known for their swift, violent attacks and expertise in guerrilla warfare. Only Richthofen and one other troop remained in the town. They retreated in a fashion that resembled a game of “robber and police.” By the time Richthofen and his fellow escapee returned to the main garrison, the rumor spread that Richthofen was killed in Kielzte, which came as a major surprise to him, to say the least.6 The celebration of his return would not last long. Richthofen received orders to move to the Western Front.

While at the Western Front, Richthofen was in small battles at Côte Lorraine and La Chaussee forests. Due to the dense forest and the land, the fighting ground was described as a quagmire due to constant artillery fire. Calvary was useless on the battlefield. The commander reassigned Richthofen to be a dispatch-bearer nearly a mile from the front lines. Being a restless spirit, he quickly became bored, and after several months he had had enough and wrote to his commanding general, “My dear Excellency! I have not gone to war in order to collect cheese and eggs, but for another purpose.”7 At first, Richthofen’s superiors wanted to punish him; however, they accepted his request and reassigned him to the Luftstreitkräfte, the Army Air Corps.

Origin of Early Flight in the Military

When the First World War began, the concept of using flight in the war was not a new idea. The first use of aircraft as a military asset  occurred during the American Civil War. Both the Union troops and Confederacy’s troops launched hot air balloons for reconnaissance and as spotters for artillery units. The Wright brothers achieved the first sustained flight of a glider-type aircraft in 1903, and the development of the airplane quickly followed. Soon after its invention, countries integrated airplanes into their militaries. Italy was the first nation to use airplanes in battle during their conflict with the Ottomans in 1911-1912. The Italians were the first to use airplanes in direct combat by dropping four grenades on Turkish troops.8

The warring nations operated airplanes during World War I. Airplanes with various designs and wing configurations served in a variety of roles, from reconnaissance to bombing. As airplanes became more prevalent, pilots of opposing sides confronted each other in mid-air combat, known as a dogfight. During the early stages of the war, pilots engaged in dogfights with nothing more than the pilots’ pistols. The early warplanes were also armed with boxes full of metal arrows and hand bombs to drop on enemy ground positions. As the war continued, military forces upgraded the planes’ armament, upgraded to machine guns mounted on the top wing of the aircraft. Pilots required some training in order to fire while flying and keep their planes intact. In 1916, the Germans invented a synchronization gear that allowed them to shoot through the propeller and not hit the blade. This advancement gave Germans an advantage and led them to dominate the skies.9

Richthofen was not considered a natural-born pilot. He seemed to be overwhelmed when starting in the Air Corp. Richthofen began as an observer and remained so for the rest of the first year of the war. He finally accomplished his first solo flight on the 10th of October, 1915. When his teacher told him to fly by himself, Richthofen later wrote in his diary that he felt like replying that he was afraid. He did well on his first solo flight until the landing. Richthofen described, “I lost my balance, made some wrong movement, stood on my [Richthofen] head, and I succeeded in converting my aeroplane into a battered school bus.”10

Richthofen quickly improved, thanks to Oswald Boelcke, Germany’s top Ace at the time, and the Father of Air Combat. Boelcke assigned Richthofen to his unit and helped forge the Baron into the legendary Ace that we know of today. Richthofen gained his first confirmed kill in 1916 and started a tradition of collecting mementos from the downed planes.11

A Flying Ace was a pilot who managed to shoot down five or more planes in total. The term Ace started around 1915 by the French media for propaganda purposes in order to create a cult around the pilots earning the title.12

The Red Baron was considered the Ace of Aces for shooting down eighty planes in all, the highest kill-count during the war. However, he was not the only man competing for the highest title. Each nation fighting in WWI had its top Flying Aces, with at least twenty or more confirmed kills. Closest to the Red Baron, the French pilot named René Fonck was credited with an impressive seventy-five kills by the end of the war. He was followed a Canadian named Billy Bishop with seventy-two kills, and the top English ace was Edward Mannock with sixty-one kills.13

The Man Becomes the Legend

Richthofen was awarded the Pour Le Mérite, the highest honor in the German Empire after his sixteenth kill in 1917. Richthofen also gained command of an air unit, as the Captain of Jagdgeschwader I.

In celebration, he decided to paint his plane red. “For what reason, one fine day I came upon the idea of having my crate painted glaring red. The result was that absolutely everyone could not help but notice my red bird, my opponent also seemed to be not entirely unaware.”14

The red plane provided his desired effect and became his calling card. In one encounter, he shot down an English two-seater plane, whose pilots survived the crash. As Richthofen followed the British fighter to the ground, he suddenly suffered engine problems, forcing him to land next to his opponent’s craft. The two Englishmen greeted Richthofen like sportsmen. The pilots talked, and the Red Baron asked if either of them had seen his plane before. One of them replied, “Oh, yes. I know your machine very well. We call it ‘Le Petit Rouge.’”15

On the 6th of July, 1917, Richthofen received a serious head injury when a bullet went straight to his skull during a dogfight. The injury caused momentary blindness, yet he managed to land in a friendly airfield. X-rays showed the bullet fractured his skull and required several surgeries. Richthofen returned to the field three weeks later against the doctor’s advice. The Red Baron returned a different man. He became depressed and anti-social with his friends and comrades.16

On the 20th of April, 1918, Richthofen managed to get both his 79th and 80th kills in his final days. Both kills were Englishmen flying Sopwith Camel biplanes, the Red Baron’s preferred opponents. Richthofen wrote, “The French attacking spirit is like bottled lemonade. It lacks tenacity. The Englishmen, on the other hand, one notices that they are of Germanic blood. Sportsmen easily take to flying, and Englishmen see in flying nothing but a sport.”17

The day before being relieved of front-line duties, Richthofen set out for his 81st kill. As he chased his opponent, he flew over enemy lines and received a fatal wound. Richthofen managed to land his plane in a nearby field. His last words, “kaput,” were spoken to an Australian soldier. Manfred von Richthofen was a national hero to the German people, and respected greatly by everyone on both sides. A wreath was placed on the Baron’s grave with the phase, “To Our Gallant and Worthy Foe.”18

I am an International & Global Studies major with a double minor in History and Military Science at St. Mary's University, Class of 2023. I want to live an interesting life with adventure. I enjoy writing and learning about the world around me both pass and present.
Author Portfolio Page

Peace Talks Breaking Down in San Antonio: the 1840 Shootout Between Comanches and Texas Rangers

February 1840:  the President of the Texas Republic, Mirabeau Lamar, stood in his warm, stale

Teddy and a Splendid Little War

Within the historic city of San Antonio, set between the Alamo and the River Walk,

Der Löwe von Afrika and the Battle of Tanga