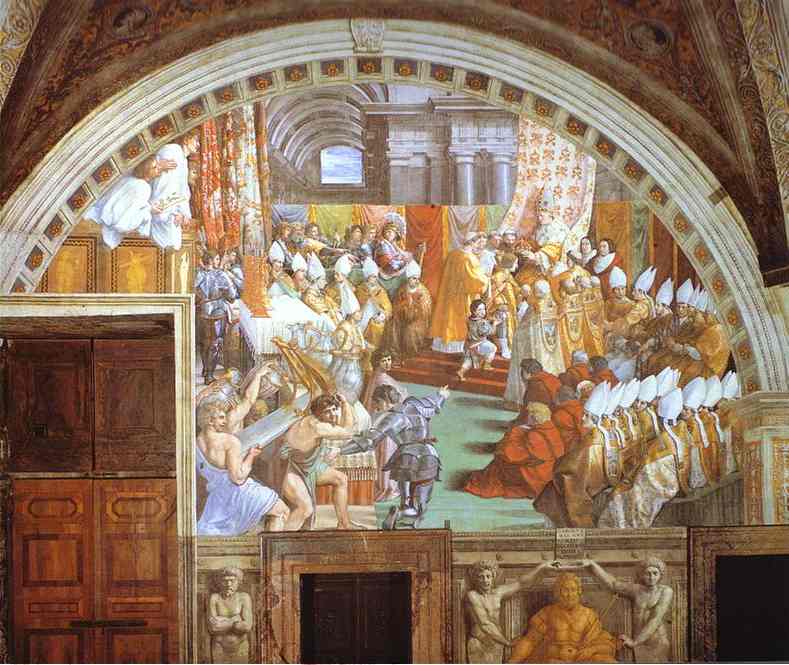 There are few moments in history that compare with the crowning of Charles the Great. It was Christmas Day in the year 800 at Saint Peter’s Basilica in Rome. Charlemagne had lingered in Rome after having publicly pardoned Pope Leo III. He was attending Christmas mass. And as Charlemagne rose from his prayer, Pope Leo came up behind him with a golden crown, placed it on Charlemagne’s head, and named him Emperor and Augustus.1 Suddenly, the crowd erupted in cheers, “Long life and victory to Charles, the most pious Augustus, the great, peace-loving Emperor, crowned by God!” However, even without the grandeur of an adoring—allegedly rehearsed—crowd, Charlemagne’s coronation still would have made its mark in history.2 Crowning Charles the Great redefined the relationship between Emperors and the Church, and marked the beginning of the end of the communion between what are now known as the Eastern Orthodox Church and the Roman Catholic Church.3

By 786, Charles the Great had made a name for himself. Since the death of his brother in 771, he had taken control—militarily—over the whole western half of Europe, and managed to defeat all of his enemies and unite them under his rule. Additionally, Charlemagne’s extremely diplomatic and congenial nature helped the Frankish king create strong alliances. And if that were not enough, he ushered in a new era of educational reforms that started a period scholars call the “Carolingian Renaissance.”4

However, despite his diplomacy, in the year 787, Charles’ most important alliance was broken. Empress Irene of the Eastern capital, Constantinople, insulted Charlemagne after breaking off an engagement between their children that would have united East and West as a front against his enemies, usurped her son, and now claimed the highest authority among all rulers.5 Her actions, however, proved to be a mistake. Her coup resulted in a weakening in the Byzantine throne, and the Abbasid caliph Harun al-Rashid, the chief power of the Middle East, and the rest of the patriarch of Jerusalem, now recognized Charlemagne as the monarch that represented Christianity. Without the support of the majority of the patriarchs in the East, Charlemagne’s power grew and the West’s claim to the church exceeded that of the East.6

Still in the West, but on the other side of the spectrum, was the Papacy. Ever since 604, the papacy had been in shambles and had become an impotent position. Pope Leo III had succeeded Adrian I, and though there is still debate over this, it’s said that Adrian’s supporters were the source of all of Leo’s plights. In 798, Pope Leo was accused of venality, fornication, and perjury, and soon had an army of opposition at his back.7 Before Leo could get help, he was attacked by these supporters that tried to damage his eyes and face and his tongue to make him unsuitable for the papacy. However, he was saved, and with nowhere else to turn, looked to Charlemagne for help.8

Upon hearing Leo’s call for help, Charlemagne decided to come settle the offenses laid against him. Leo went to meet Charles at his palace northeast from Aachen, but soon discovered his enemies had beat him there. Charles, pondering what to do, sent Leo back to Rome and said that they would meet there, but at Charlemagne’s pace. It took over a year for Charlemagne to announce he was going to Rome to hear Pope Leo’s “case.” Finally, in 800, Charlemagne rode into the city in a great spectacle, and eight days later, gathered a council to have Leo “tried” for his offenses. They decided Pope Leo III would publicly make a solemn oath that the accusations against him were false, and on December 23, he did. Charlemagne had officially saved the Pope’s life. After his various demonstrations of power, and the lack of power in the East, the events that would unfold within the next two days were expected.9

Ultimately, Charlemagne’s coronation changed the course of history. This coronation set the precedent that the Papacy and the Emperor were dependent on each other and would continue to be for hundreds of years. It also began the break between the Eastern and Western churches. Easterners saw the event as a “veritable betrayal” and a clear intention of “breaking with the Empire of the East.”10 As for Charlemagne, his intentions were unclear. Many believe initially he “had such an aversion that he declared that he would not have set foot in the Church the day that they were conferred,” while others say he had representatives brought to Rome to witness the mass.11 Regardless, on December 25, 800, Charlemagne was officially declared Emperor, Augustus, and Protector of Christianity. The world would never be the same.