Murder or “Justifiable Homicide”?: The Death of the Revolutionary Fred Hampton 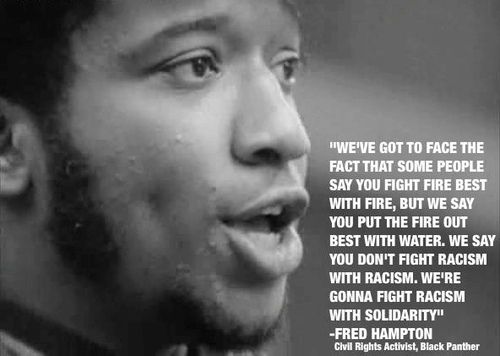 Best Use of Images

Born August 30, 1948, Fred Hampton seemed to be destined to be a revolutionary from a young age. At just sixteen, Fred took over his local youth chapter of the NAACP and grew numbers from roughly 100 to close to 700.1 Around the same time, he set up a protest of the policy of black girls being excluded from being elected homecoming queen, and successfully changed it.2

After high school, Fred’s work for social justice continued, championing a neighborhood pool and recreation center that would allow the youth of the community to have a place to spend the days during the summer. By nineteen years old, Fred Hampton became the deputy chairman of the Illinois Chapter of the Black Panther Party. Unlike the violent and militant picture that has been painted of the Black Panther Party, BPP, local chapters worked incredibly hard to better their communities, much like Fred did before he joined. Chapters implemented school lunch programs, opened health clinics, protested for street light installation when people continued to die at intersections, held political education classes to educate people within the community on their rights, and much more. The BPP had a 10 point program that laid out their missions:

1. We want freedom. We want the power to determine the destiny of our black community.
2. We want full employment for our people.
3. We want the end to the robbery by the capitalist of our black community.
4. We want decent housing, fit for the shelter of human beings.
5. We want education for our people that exposes the true nature of this decadent American society. We want education that teaches us our true history and our role in present day society.
6. We want all black men exempt from military service.
7. We want an immediate end to police brutality and murder of black people.
8. We want freedom for all black men held in federal, state, county, and city prisons and jails.
9. We want all black people when brought to trial to be tried in a court by a jury of their peer group or people from their black communities, as defined by the constitution of the United States.
10. We want land, bread, housing, education, clothing, justice and peace.3

Shortly after taking the role he did, Fred promptly became the target of the FBI’s COINTELPRO, whose purpose, among other things, was to “prevent the rise of a ‘messiah’ who could unify, and electrify, the militant black nationalist movement.”4 This easily could have been Fred, as “he stood next in line for national leadership of the BPP” and did in fact electrify the people.5 Fred was paramount in the implementation of the school breakfast programs and health clinics for people in his community. Not only were social programs flourishing under Fred; he “had an uncanny ability to relay his message” and unite all members of the community, from “urbanized youth” to “church going members of the black community,” while also, like other BPP chapters around the US, giving political education class every day.6

Along with unifying the black community, under the Rainbow Coalition, Fred was able to unite all disenfranchised members of society, no matter their skin color. On top of all of this, Fred worked to broker a nonaggression pact between “some of the most notorious gangs in Chicago,” and was in the middle of brokering another deal that would move people off the streets and out of gangs, and into the BPP, to fight “the true enemy–the government and the police.”7 Fred’s ability to bring people together and bring true change impacted many lives, but unfortunately, as he predicted, it also cost him his life.

The stated purpose of the December 4 raid was to seize illegal weapons that the Panthers were suspected of possessing, but, the illegal weapons they were in search of were never produced. Furthermore, during a federal grand jury investigation, it was noted, “the whole concept of going on a raid in a high crime density area to obtain weapons from known militants—led by a convicted felon believed to be dangerous—with only fourteen men in plainclothes, in the dead of night, with no sound equipment, no lighting equipment, no tear gas, and no plan for dealing with potential resistance—seems ill-conceived.”8 With this idea, it seems unlikely that the purpose was to obtain any weapons, as Austin Curtis states in his book Up Against the Wall: Violence in the Making and Unmaking of the Black Panther Party, “if [those in charge] had wanted to avoid violence and to confiscate the weapons they claimed to be searching for, they would have conducted the operation in the early evening,” but “as indicated by the heavy arsenal [including shotguns, submachine guns, carbines, and pistols] they carried,” it is clear that avoidance of violence was not what had been planned, especially with the knowledge that an 8 pm raid was rejected, even though it was known that the apartment would have been empty.9

Prior to the raid, there had been many attempts by COINTELPRO to discredit, disrupt, and disband BPP chapters, through, what seems like, any means necessary, including instigation of gang violence, seizure of assets, destruction of headquarters, and infiltration of the party, among other things. When the first three of those proved unsuccessful, infiltration of the party ultimately led to its downfall and the death of Fred when William O’Neal, an FBI informant, joined the party and “quickly moved up the ranks.”10 During his time as an informant, O’Neal, under orders from the FBI, sabotaged the breakfast program, stole documents financial and otherwise, and encouraged violence against police and the community with FBI supplied weapons and bombs, among many other tasks.11 O’Neal is also, for all intents and purposes, the person who brought about Fred’s death. Not only did he supply a hand drawn layout of Fred’s apartment, which even noted the rough height of the bed, he also supplied a list of who would most likely be there at a given time, and even drugged Fred, so that he would be unable to react at the time of the raid.12

Shortly before 5 am on the morning of December 4, fourteen officers stormed the home of Fred Hampton, where he, his pregnant girlfriend, and several others were sleeping. At the end, two men, Mark Clack and Fred, lay dead, while several others were wounded, critically or otherwise. The surviving members were then arrested and all “charged with attempted murder, aggravated assault, and assault with a deadly weapon, with bail set at at least $100,000 each.”13 Immediately, the police, and state’s attorney in charge of the raid, touted the raid as a success and put forth a narrative in which the Panther members were the aggressors, even stating that when they, the police, shouted for a cease fire, they were met with shouts to “shoot it out.”14 The members of the force were praised for their “bravery” and “professional discipline in not killing all the Panthers present,” and even did a CBS special reenactment of the raid, to “show” the public what had happened, along with supplying photo “evidence” of the Panther’s aggression in the form of bullet holes.15

This story quickly unraveled as independent investigations by many parties, Panthers, media, and more, in conjunction with the stories of the survivors, painted a very different picture. The “bullet holes” that were touted as proof of Panther aggression turned out to be no more than nail heads in the wall.16 With this information, it was discovered that the Panther’s had only fired one shot, which came from the gun of Mark Clack after he had been shot in the heart outside the door, with the other ninety-nine rounds from the officers of the raid. Furthermore, after evaluation of the scene, which against protocol had not be secured or sealed, it showed that the brunt of the bullets were aimed in the direction of the bedroom, where Fred and his girlfriend slept.17 The stories of the survivors further threw into question the story given by the police, especially that of Fred’s girlfriend. When she was unable to wake Fred, even though she was eight months pregnant with their child, she climbed on top of him to attempt to shield him from the hail of bullets, which only stopped when someone shouted “we got a pregnant sister in here.”18 After being dragged out of the room, she, and other survivors, reported hearing a conversation between three people that went as follows:

Second Voice: “Is he dead? Bring him out [of his bedroom].

An autopsy report confirmed this account, as the fatal bullet wounds “entered directly in front of the right ear and exited from the left side of the throat, and the other entered the right forehead and probed to a point behind the left eye…[all] consistent with two shots to the head at point blank range.”20 All of this, in culmination with none of the weapons within the home actually having been illegally obtained, and that the search warrant itself had been illegally obtained, made the raid itself illegal and orchestrated under false pretense, which led to the creation of a federal grand jury to investigate the raid and Fred’s death.21 Unfortunately, even with the acknowledgement of excessive force, the entirely illegal search warrant, the obvious discrepancies between the stories of the officers and the evidence, acknowledgement that “officers fired ninety-nine shots through the walls of an apartment where they knew people were sleeping” and the conclusion “unquestionably the raid was not professionally planned or properly executed and the result of the raid was two deaths, four injuries and seven improper criminal charges,” the report stated “the physical evidence and the discrepancies in the officers’ accounts are insufficient to establish probable cause to charge the officers with a willful violation of the occupants’ civil rights,” instead labeling the deaths “justifiable homicide.”22