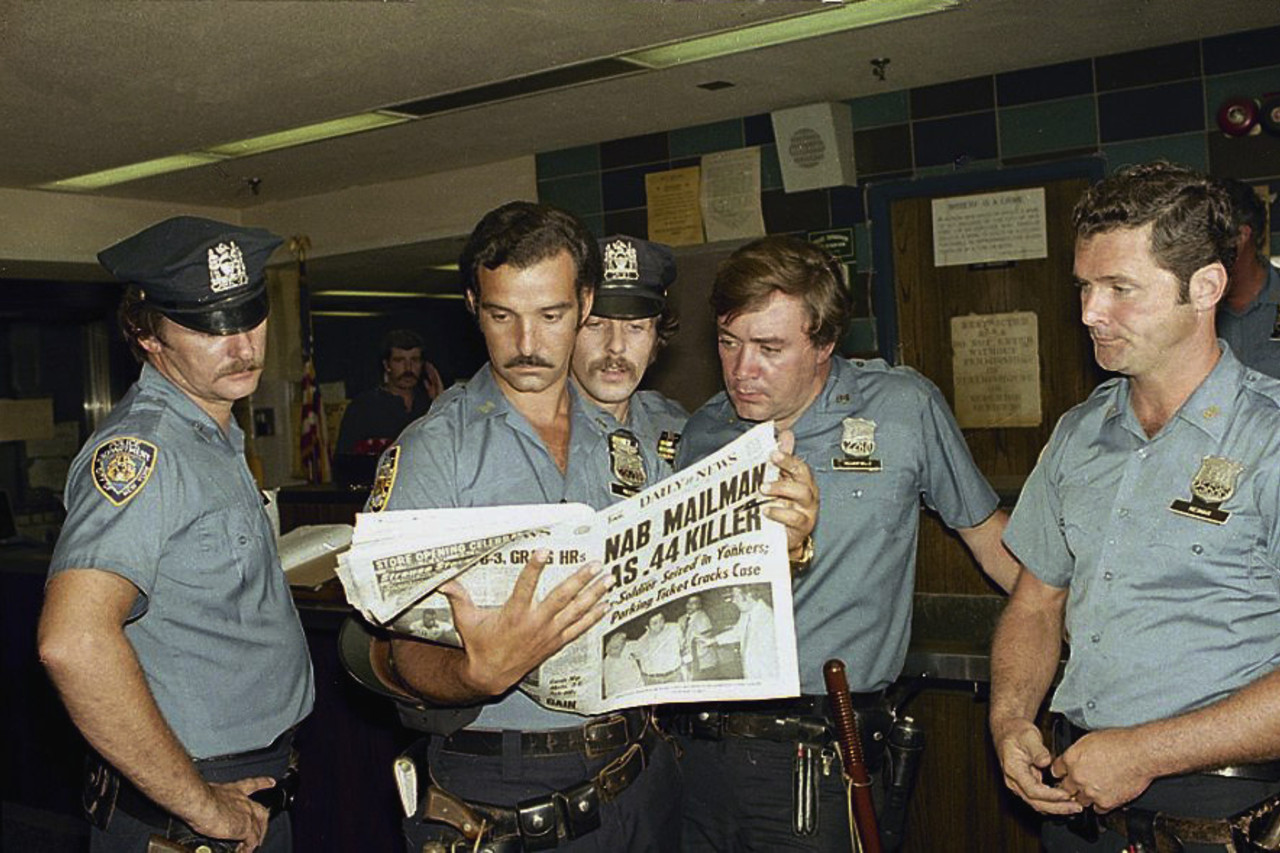 American society has always had a fascination with violent crime, mass murders, and serial killers. David Berkowitz, aka the self-proclaimed “Son of Sam,” has his own view on the matter, saying:

“Serial killers are very rare. All of the media attention makes them look more prevalent than they really are. In my opinion, this is part of the inner spiritual decline of western society as we slowly slide towards anarchy.”1

The “Son of Sam” terrorized the citizens of New York City during the mid-70s, during what is now known as the infamous Summer of Sam. Berkowitz and his .44-caliber revolver claimed the lives of six people, injured seven others, and left an entire city too afraid to go out and enjoy the nightlife of New York.2 Before Berkowitz discovered his lust for murder, he was feeding into his pyromaniac desires in order to cope with the stress of his everyday life.

Berkowitz served in the US Army from 1971 until his honorable discharge in 1974. After his discharge, he returned to his home state of New York, where he enrolled at Bronx Community College, and worked odd jobs in order to pay his rent and tuition.3 Having been given up for adoption at birth, he was intent on reconnecting with his family, especially after his adoptive mother passed away after losing her battle with cancer. He reconnected with his birth mother and half-sister, and would often pay them visits until he lost interest in those relationships.4 The feeling of loneliness that rapidly consumed him, paired with the stress of work and school, is where his felonious acts began.

Between the years of 1974 and 1977, Berkowitz claimed to have set more than 1,500 fires in New York City. Though the fires were relatively small, each fire that was set had been carefully detailed and thoroughly documented in his personal journals, where he refers to himself as “The Phantom of the Bronx.” FBI profiler Agent Robert K. Ressler noted that Berkowitz was a classic example of an arsonist, that by setting fires he regained a sense of control in a world where he felt like he had none.5 Even though he claims full credit, it is not clear if all 1,500 fires were set solely by Berkowitz, as the only evidence connecting him to them are the journal entries.

Looking back, Berkowitz was able to identify his arsonistic behavior as abnormal. In an interview released in 2016, Berkowitz reflected on his early life and expressed remorse that he didn’t reach out for assistance in dealing with his mental health issues. His half-sister recognized his need for medical attention and offered to accompany him on a visit to a doctor so that he wouldn’t feel alone. Though he was able to work and function in a seemingly normal way, his mental health rapidly deteriorated as he developed severe depression, paranoia, and schizophrenia.6 As his life continued to spiral out of control, he refused to ask for help.

Situations like Berkowitz’s were all too common during that time period. In a survey that included respondents from 27 countries, it was reported that 50% of adults with schizophrenia surveyed expressed discrimination in their personal relationships. In the same survey, up to 2/3 of these adults anticipated discrimination while applying for work or looking for a close relationship. Media coverage of mental illnesses has always been consistently negative and inaccurate, adding to the overall negative experience of the stigmatized person.8

We all experience some form of stress in our lives, some more so than others. In 2014, a study done by the American Psychological Association and the American Institute of Stress found that 73% of adults regularly experience psychological symptoms caused by stress.9 While we all use different coping mechanisms for this stress, rarely does it involve taking the life of another. Much like in Berkowitz’s situation, family members would plead with an individual to seek help, but because of the stigma associated with psychiatry and mental health, an individual would rather suffer in silence than to reveal his personal struggles. The self-stigma, or the internalization of a mental illness and decrease in self-esteem, begins even before an individual is diagnosed, as he or she learns about the culturally disseminated stereotypes associated with various mental illnesses. The anti-psychiatric sentiment was all too common during the 1970s, and the general attitude toward psychiatry was that it did more harm than good.10

In 1975, Berkowitz became friends with members of a cult, who introduced him to a new world of horror. Having always had an interest in the horror genre of books and movies, it didn’t take long for Berkowitz to discover The Satanic Bible authored by the founder of the Church of Satan. Berkowitz moved to Yonkers, New York, in order to be closer to the cult he joined, the Process Church of Final Judgement, who called upon followers to start anarchy and ultimately bring about the end of the world.11

The hallucinations from the drugs and alcohol consumed during occultic rituals were just an addition to the ever growing list of his mental struggles. As the line between hallucinations and reality began to blur, Berkowitz developed an affinity for all things demonic, as his involvement in occultic rituals soared. A deity that Berkowitz paid homage to was known as Samhain, the Druid devil.12 Druids demanded a human in order for a line of communication to be opened. Berkowitz felt as though this deity was sending him messages, and he believed that he was in communication with Samhain throughout his killing spree, which is where he got the name “Son of Sam.”13

The 1970s saw a rapid rise of satanic culture in music and literature, unleashing the Satanic Panic of the twentieth century. Across the country, hundreds of accusations that suburban daycare workers were actually devil-worshiping pedophiles poured out from middle-class families. A modern day witch hunt, the panic spread like wildfire as an array of accusations were thrown about, ranging from caretakers raping the children and sacrificing babies and forcing the children to drink their blood. While no one was convicted, the lives of the accused were forever changed as they lost their jobs and their reputations.14 During the summer of 1976, Berkowitz bought the .44-caliber Charter Arms Bulldog handgun that he would use to wreak havoc upon the city.15 On July 29, 1976, Berkowitz began his killing spree under the influence of his satanic beliefs as he shot and killed Donna Lauria and injured Jodi Valenti.16 The shootings happened frequently with little time in between, with the longest “break”  lasting three months, keeping the city on its toes. Berkowitz taunted the police and the public through letters he would leave at the scene of the crime for the police, or he would send them to reporters through the mail:

“Don’t think that because you haven’t heard from me for a while that I went to sleep. No, rather, I am still here. Like a spirit roaming the night … I will see you at the next job. Or, should I say you will see my handiwork at the next job?”17

It would take eleven victims, of which only six survived the attacks, for Operation Omega to come into existence. Operation Omega was a special task force assembled by Detective Timothy Dowd, and it included 300 members: 75 detectives and 225 uniformed officers.18

While the police and Berkowitz played a game of cat and mouse, the citizens of New York City were taking precautions of their own. The shootings happened at night and to females with long brown hair. So parents encouraged their daughters to dye their hair or wear it up in order to become less appealing to the elusive killer.19

Cacilia Davis was walking her dog one night when she passed by a young man who she believed was acting strange, holding his arm stiff as though he was carrying something. A few minutes after walking past, she heard gunshots. Upon learning of the double shooting, she became certain that she had encountered the Son of Sam and reached out to the police. When pressed for details of the encounter, Davis recalled seeing an officer writing a citation for an illegally parked vehicle. Berkowitz would use his own personal vehicle to travel to and from each scene and the police had stumbled upon his car; they just didn’t know it. Using the information from the plates on the car, the police tracked Berkowitz to his Yonkers apartment where they arrested the elusive killer.20  New York’s biggest police manhunt in history had finally come to a close.21 Having prowled the streets for over a year, the arrest was a relief to the city.

At the time of his arrest, the media publicized a story claiming that Berkowitz believed his neighbor’s dog was instructing him to kill people as a sacrifice.22 Berkowitz addressed this claim in an interview in 2016, where he claims that his neighbor’s dog, Harvey, had nothing to do with the crimes. He doesn’t understand where the confusion came from because he clearly labeled himself the Son of Sam, and Harvey sounds nothing like Sam.

After being sentenced to 365 years in prison for his crimes, David Berkowitz slowly adjusted to prison life.23 Berkowitz, now known by his Christian inmates as Brother David, has spent the last 40+ years in prison repenting for his sins. He renamed himself the “Son of Hope,” and he regularly attends Bible Study groups and chapel services.24 After reading the Christian Bible, Berkowitz  believes he finally understands why he killed his victims all those years ago. He cites the Bible as an accurate account of what happened to him: an eternal battle between good and evil, between God and the Devil.25 “I was once an evil man. I truly believed that I was working for Satan and I embraced the mission.”26

“A short while ago I returned to my prison cell after attending this evening’s Bible study class…  about twenty of us sat in a circle in the chapel, and as I scanned the faces of these men—a mix of different races, backgrounds and nationalities—I found my heart bursting with love and hope. Now this may sound foolish to many, but as I looked at this collection of convicted felons, I saw the reality of God’s grace to mankind….I saw men who’ve been rescued from the road to destruction. They’ve been redeemed by the blood of Jesus Christ, and saved from the fires of an eternal hell….Society, of course, may only see them as a group of criminals who’ve become “religious.” But I believe the Almighty God sees them as His children.“27

In 2004, Berkowitz was denied a parole hearing after he stated that he did not want one. The parole board recognized his good behavior but felt that his crimes were serious enough for him to remain imprisoned. In a letter he wrote to George Pataki, the New York Governor at the time, he detailed his coming to terms with his imprisonment. Berkowitz wrote that with God’s help, he has accepted his situation and that he has come to terms with the fact that his punishment will continue; he believes that he deserves to be imprisoned for the rest of his life.28