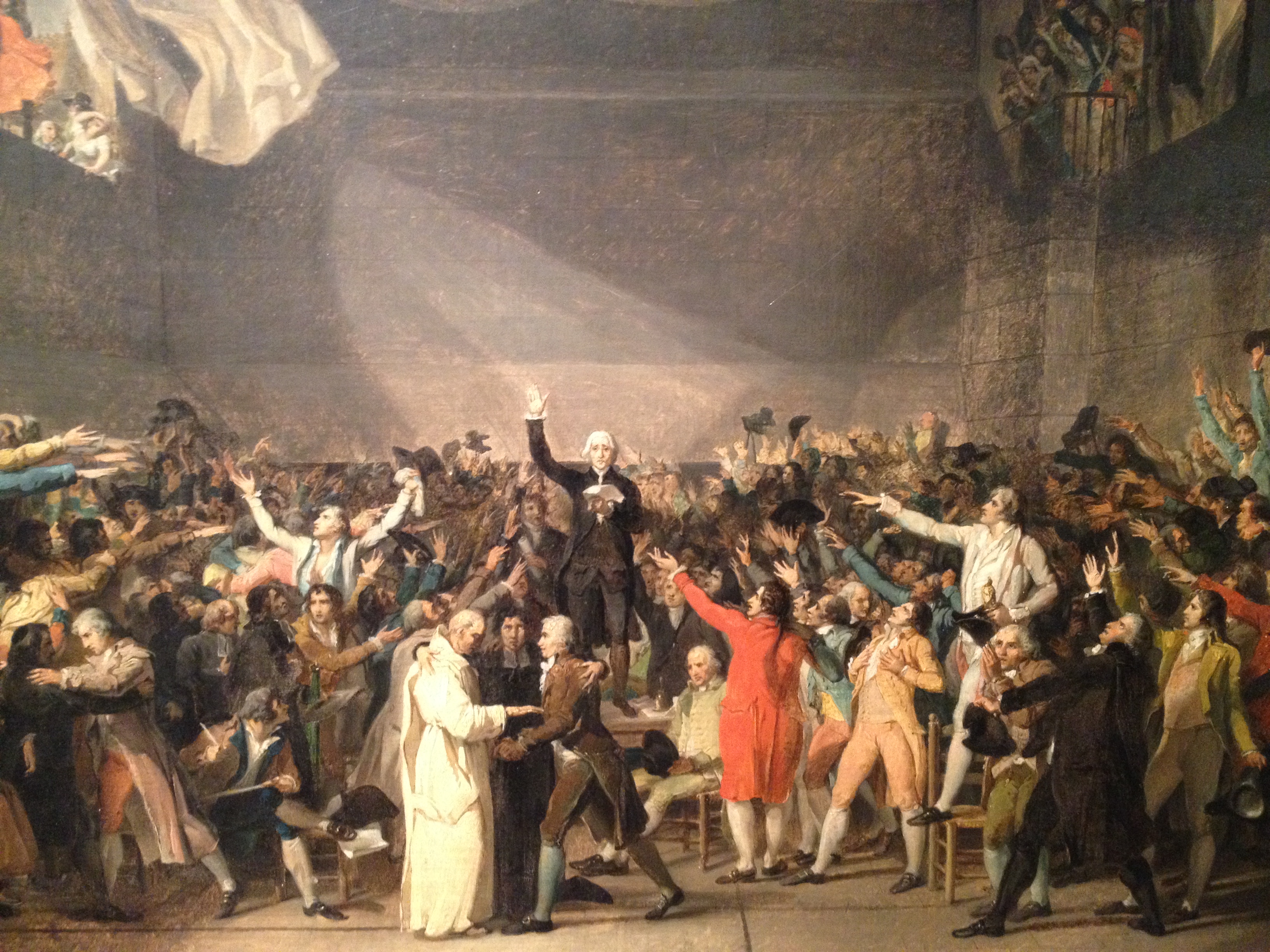 The French Revolution is perhaps the most famous revolution in all of history. In 1789, the French people, suffering from starvation, excessive taxation, and governmental bankruptcy, began a process that led to the overthrow of the French monarchy. The years that followed marked a violent, bloody period of radical social and political change. It starred well-known figures, such as King Louis XVI, Marie Antoinette, Maximilien Robespierre, Napoleon Bonaparte, and the guillotine. It spread universal ideals of the Enlightenment, such as liberty and equality, throughout France, ending the last traces of the feudal system of the ancien regime. It was under these circumstances that the artist Jacques Louis David painted some of the most memorable and vivid images of the French Revolution that we have today.

Jacques Louis David was the leader of the neoclassical movement of art; that movement sought to strip paintings down to their bare essentials, returning to the same realism that was portrayed in classical Greek art. This was a sharp contrast to the opposing Rococo movement occurring at the same time, which emphasized color and depicted frivolous, lighthearted activities. At the beginning of his career, David made a name for himself as a historical painter by depicting subjects of antiquity, perfecting the painting style founded by Nicolas Poussin. After spending many years as an apprentice under Joseph Marie Vien, he gained immediate acclaim in the artistic world with his painting Oath of Horatii (1784), which was displayed at the Parisian Salon in 1785.1 The painting is marked by the accuracy of its classical figures and setting. The emphasis on lines and geometry gives the figures a statuesque appearance, which recalls the sculpture of classical Greek art. This emphasis on composition over color highlighted the serious tone of the painting, in which the Horatii are swearing to their father to protect the good of the state.2 It was evident by the event that David portrayed that he held the government of France responsible for the nation’s troubles.

With the rise of the revolution, David was able to shed the classical disguise of his complaints against the monarchy and depict contemporary events. He captured key moments, including the execution of Marie Antoinette and the Tennis Court Oath, featured above. Painted in 1791, The Tennis Court Oath depicts the Third Estate declaring themselves the National Assembly of France, voicing their discontent with the French monarchy. After being locked out of the Estates General, the Third Estate, made up of the elite of France that were not of the aristocracy, fled to a nearby tennis court where they vowed to remain in session until a new constitution was written. Soon, they decreed the end of the feudal system and published the Declaration of the Rights of Man and the Citizen, declaring the equality and natural rights of the citizens of France.3 David focused on action in this painting by emphasizing the outrage of the National Assembly. The people flood the room, throwing their arms up in outrage. The direction of the lines of their arms and a spotlight of sunlight draws attention to a central figure as he proclaims their desire for liberté, égalité, and fraternité.

By 1790, David was deeply involved in the Jacobin Party and formed a friendship with Maximilien Robespierre, the leader of the party and later of the Reign of Terror, and several other radical leaders. Elected to the National Convention in 1792, he was one of those who voted for the execution of Louis XVI. In 1793, he worked to dissolve the royal French Academy of Art and replace it with the Popular and Republican Society of the Arts.4

David’s most influential painting, the one that fed the revolutionary fever, was his portrait The Death of Marat (1793), which became a rallying point during the Reign of Terror. The painting depicts one of David’s friends, Jean-Paul Marat, who was the founder of the populist journal L’ami du peuple and a leader of the Jacobin movement, and who was killed by Charlotte Corday, the daughter of a devout royalist family.5 David was commissioned to immortalize Marat as a hero only a day after the famous assassination as part of a political move to suppress counter-revolutionary forces.6 In the painting, Marat lies dead in his bathtub, holding a letter from his assassin. David maintains his somber realism, the same style as his historical pieces. The image was so powerful and poignant, it has come to be seen as a “secular Pieta.”7 Much like his recall to antiquity, in the portrait David called to mind religious qualities that struck a chord with the French people. Just as Jesus Christ died for the sins of all, Marat died for the principles of the revolution. The National Convention, with the help of David, worked to erase the influence of the Catholic Church, whose clergy helped make up the privileged First Estate of France. Marat was now a martyr that France could identify with, replacing the sacrificial image of Christ.8

In 1794, as the Jacobin party fell from power, David was imprisoned for seven months, where he continued his work as a painter. After his imprisonment, he returned to historical painting, depicting The Intervention of the Sabine Women (1799). He later referred to this work as his masterpiece. While the painting marks David’s return to antiquity, there is a clear shift in his style of painting. Instead of the geometrical realism of Poussin, the forms of this painting are more relaxed and smooth. The Sabine women sought to bring peace between their fathers and Roman husbands. Again, David used a scene from antiquity to portray his feelings about the political climate after the fall of the political regime to which he dedicated himself. Not long after, keeping his dear friend Robespierre in mind, David swore he would never again follow a single man; instead, he would follow principles. However, it was not long before David met the charismatic and ambitious Napoleon Bonaparte and quickly fell under his sway.9 Soon after, as Napoleon rose to power as the emperor, David was appointed to the position of first painter. During this time, he painted many portraits of the emperor, including a depiction of the Coronation of Napoleon and Josephine (1805-1807) and the Distribution of the Eagles (1810).10

The most famous of these imperial portraits was Bonaparte Crossing the St. Bernard Pass (1800), where David continues the shift shown in The Intervention of the Sabine Women and romanticizes the emperor. It is suspected that Napoleon hired David as court painter and propagandist to champion the imperial regime, and this portrait demonstrates why this argument could be true.11 In Bonaparte Crossing the St. Bernard Pass, the emperor is portrayed as a leader in action and his physical stature is idealized. The names of Hannibal and Charlemagne are engraved in the foreground of the piece with Bonaparte nearby, associating Napoleon with these famous conquerors and their successes in battle. With Napoleon looking straight at the audience, the piece seems to take place right in the middle of the action, as if compelling the viewer to take part. Although his horse looks wild and frightened, Napoleon displays total control over it, displaying his strong qualities as a leader.12 Although the portrait is set against a bright red backdrop, the linear line work in the painting is clearly the work of David.

After the defeat of Napoleon at the Battle of Waterloo, the monarchy was restored, and David was exiled to Brussels. From there he continued his work, focusing on portraiture, until his death in 1825.13 Still, he is most remembered for his work depicting some of the most important events in French history, giving us images of the French Revolution that are still unparalleled in art history.